In 1996’s Harvest Moon, a young man inherited a run-down farm from his grandfather, built it back up again into a thriving ranch with chickens and cows and crops, and married a young woman from the nearby town. In doing so, Harvest Moon’s developers effectively created the farming sim genre.

2021’s installment of Story of Seasons may have changed name (having ditched the Harvest Moon moniker when its developers broke off from publisher Natsume) but the plotline and gameplay goals have changed very little. In fact, rather like its protagonists’ farms, it has nestled into a cozy repetition. And if you look to the genre the series pioneered as a source of comfort rather than novelty, like I do, that’s just fine and dandy.

There’s a good reason, Nakano says, why 25 years of iterations have not resulted in drastic upheavals to what Story of Seasons is: at its core, that’s just not what the series is about.

“The series’ main themes have changed gradually over time, but I think you could sum up its simplest theme as the desire to live in the countryside away from the big city,” the director says, speaking to IGN. “City life has its benefits and conveniences. I myself live on the outskirts of Tokyo. But do we really want to live our whole lives this way? This series has always sought to explore that fundamental question. Part of the series’ uniqueness lies in how it embraces that theme, and it’s one of the biggest reasons to play it.”

But for a series that, outwardly, seems to have changed so little, the director does point out a number of crucial shifts over the years. Nakano is no stranger to the massive changes the games industry has seen over Story of Seasons’ lifespan, and has seen firsthand how those changes have impacted the genre it helped pioneer. He says he believes that the introduction of portable platforms had “the greatest impact in the series’ history,” and that development of Story of Seasons has shifted deliberately in the direction of portability in recent years.

The original creator of Story of Seasons, Yasuhiro Wada, has recently been working on his own separate projects like Birthdays: The Beginning and Little Dragon’s Cafe. But he did have a statement to share in honor of the series’ 25th: “Reminiscing on the difficult early days of development stirs up so many emotions within me,” he says. “This beloved series has come so far thanks to the enthusiasm of the fans who play these games, as well as the love and devotion of everyone who has contributed to them. I’ll always be rooting for the success of the Story of Seasons series as it continues to grow and evolve.”

He also notes that technological developments over the years have given developers more tools and ways to express themselves, but have also made it more challenging to balance games and tie their different elements together.

More broadly, Nakano is happy to see how much more accessible gaming has become — not just in terms of platforms, but in design as well.

“I’m not sure how cleanly Story of Seasons fits into the mold of the simulation game genre, but I used to assume that such games were difficult and had these unbearably thick manuals,” he says. “But the ones you see nowadays are designed to be easy to pick up and play. Story of Seasons has always been committed to this design philosophy.

“However, I also think more people have grown interested in Story of Seasons thanks to an increase in and a mutually beneficial relationship with wonderfully playable titles like Animal Crossing and Stardew Valley.” 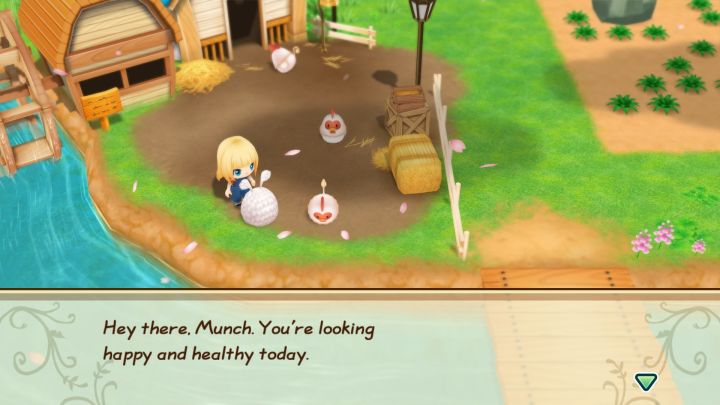 I ask Nakano if he’s played Stardew Valley — a game indebted to Harvest Moon and Story of Seasons, but which many believe pushed the series’ ideas further than they had been before — and he has. He says he really enjoyed details like the festival decorations in the town during seasonal events, and the sound effects that continued to play even when the music stopped.

“I especially appreciated how so many little things would change as time passed. For example, there’s one fruit that you can normally only gather a few of at a time, but for a couple of days you can harvest many of them at once. Another example of a simple day-to-day change is using your hoe to dig up suspicious tiles on the road that yield different items.”

But it’s clear that Nakano sees Stardew Valley as a companion to his own series, rather than a competitor — seemingly because Story of Seasons’ developers have a fixed idea of what they’d like to achieve. As Nakano reflects on Story of Seasons’ 25-year history, he points out that its overarching themes of wanting to escape big city life to live in the countryside, close to nature, haven’t really changed. “This series has always sought to explore that fundamental question. Part of the series’ uniqueness lies in how it embraces that theme, and it’s one of the biggest reasons to play it.”

But he also points out the critical, if at times subtle, alterations the series has seen in that time span. He points out 2005’s Harvest Moon: Magical Melody as a critical turning point for the franchise, shifting its tone to one less focused on a specific, time-sensitive end goal, and more focused on player freedom — an idea which would ultimately become central to not just Story of Seasons, but the genre as a whole.

“I think the most meaningful changes occurred during Harvest Moon: Magical Melody,” Nakano says. “Before that, the games had a framework in the form of a specific time limit — such as three years — during which you had to get everything done, and so the game focused on how you spent those years. Players had to work from dawn to dusk to achieve the best possible results, which is the opposite of a relaxing experience.

“But Magical Melody had no time limit. The game ended when the player collected enough musical notes, but they could continue to play after that. This allowed players to move at their own pace, giving them the freedom to play however they wished. Players could also choose where to place their house and farm, which increased the customization options by allowing them to create their ideal farm.

“We experimented with gameplay both before and after this game, but I think this marked a turning point in the series where the games gradually began to let the player choose how they wanted to play.”

There are, of course, other types of changes too. I also spoke to Nakano and the localization team about the shift to embracing more inclusive gender expression in the games’ character creators in recent titles like Pioneers of Olive Town, as well as both Olive Town and the recent remake of Friends of Mineral Town’s moves to celebrate queer relationships in their Western localizations.

That change also ties in directly with some upcoming DLC for Pioneers of Olive Town, which will celebrate the series’ 25th anniversary by bringing back a number of characters from past games like Story of Seasons and Story of Seasons: Trio of Towns, including marriage candidates that will now be romanceable by players of any gender.

As localization manager John Wheeler tells me, the characters — romanceable or otherwise — who were chosen to make an appearance were based heavily on fan feedback. Nakano asked the XSEED localization team which characters from those games were fan-favorites in the West, and XSEED scoured online polls and comment threads to find out and make recommendations accordingly. So fans of Reager, Iris, Lisette, or Ludus may have the localization team in part to thank for their appearances in the DLC. And beyond that, XSEED seems to be teasing another full remake along the lines of Friends of Mineral Town in the future (please remake A Wonderful Life, I am begging you).

Ultimately, Nakano wanted Pioneers of Olive Town to be an opportunity for the team to both look back on the series’ 25-year history, but also to look forward. “I doubt that we’ve ever stressed so much over the design and development of a game like this before,” he said. Even so, he says he finds it hard to imagine exactly what Story of Seasons might look like 25 years from now.

“As long as the idea of living closer to nature appeals to people, Story of Seasons will continue to exist,” Nakano says. “The way people play the game may change as well — who knows, maybe one day it will be a multiplayer game. I’m looking forward to what the future has in store for it as much as anyone else.”

Rebekah Valentine is a news reporter for IGN. You can find her on Twitter @duckvalentine.

Oddworld: Soulstorm Trophy List Requires Multiple Playthroughs for the Platinum, Including a No Death Run

By World Games6 hours ago0
IGN

By World Games6 hours ago0
IGN