Five years have passed since console players got to enjoy a game based on the exploits of Agatha Christie‘s famous Belgian detective. Blazing Griffin’s Agatha Christie – Hercule Poirot: The First Cases breaks that deadlock with a new adventure game that follows just a few weeks after their console debut title. This game takes a slightly different direction to Murder Mystery Machine and feels like a far more natural setting for Poirot to inhabit.

Most Hercule Poirot games are based on Agatha Christie’s novels featuring the detective. As such, the story has some element of predictability. However, The First Cases is an original story and features one of his first cases before he became a legendary detective. It begins after a shooting incident during his days as a police officer leads to Poirot’s disgrace. He’s sent to a rural backwater to perform tasks like judging the annual garden show while all of the fuss dies down. Instead, a household servant drags him into investigating the theft of a bracelet for the Van den Bosch family.

Years later, the results of that investigation see a newly promoted Detective Poirot invited back to the house of the Van den Bosch family as they celebrate their daughter’s engagement. He’s not there to exchange pleasantries, though, as a blackmailer threatens to ruin the occasion before a murder puts a dampener on the whole thing. Trapped within the mansion by heavy snowfall, Poirot is the only person who can solve the mysteries.

The First Cases is a traditional adventure game where Poirot must find evidence, interview suspects and witnesses before putting these together to form conclusions. Finding evidence is a fairly simple process. Every single object is marked with an eye icon when it has not been inspected and this changes to a gear icon when Poirot has looked at it. There is no finer examination of objects and no puzzles to solve; all of the important details and theories are automatically added onto the mind map for players to see. 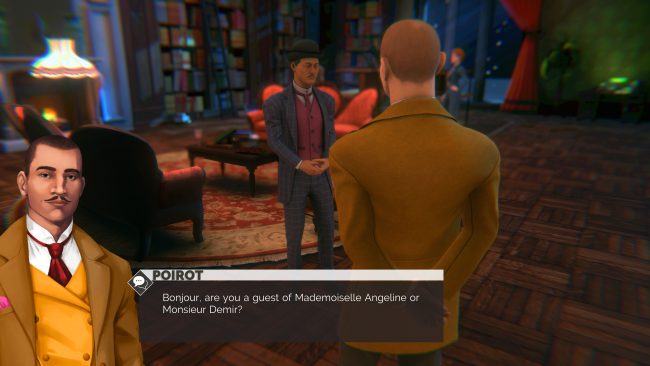 Interviewing suspects is also a straightforward process where questions can be asked in any order. Occasionally Poirot will try to extract a secret or a repressed memory from a suspect and a certain type of questioning is needed here. Some may need direct questioning, others a more sympathetic ear. The game tells you exactly what type of interrogation to go for and even labels each question with the type of emotion Poirot will be using. It’s in these moments you sometimes see an unusual amount of tact for Poirot, who is known more for being blunt. Even if you get those choices wrong, the game will take you back to the beginning of the conversation to try again until you get it right.

When it comes to the mind maps, it’s difficult not to draw comparisons with Blazing Griffin’s previous title, Murder Mystery Machine. The good news, though, is that most of the issues from the earlier title have been solved, mainly because The First Cases was clearly built for PC and consoles first. Poirot’s mind maps are like a police evidence board where the evidence is linked together to form correct deductions and create new dialogue options. As The First Cases runs as one long story rather than individually released episodes, different aspects of the case have different mind maps that run simultaneously. Often there are four or five mind maps per chapter.

Evidence is automatically applied to the correct mind map. As soon as new evidence is added, the game indicates how many new links can be made so the way forward is always clear. It’s impossible to make incorrect links and the icons are always positioned in such a way that deductions rarely cross over. This does make most of the conclusions rather easy to put together, but there are also some that are not even remotely obvious. In these cases, trial and error is the way to go because there is no hint system in this game. When resorting to attempting to link everything and anything, evidence turns red if a player has already tried to link it together, so progress is even made obvious then. Once each board is completed, it is closed down.

Despite its simplicity, players feel like a competent detective all the way, even with all of the twists and turns. There’s even a display of Poirot’s trademark pomposity every time he makes a correct deduction, and this is one of the few times where repetitive dialogue starts to grate on the nerves. The only time Poirot’s confidence falters is when he has to use his powers of interrogation to decide the outcome of the story. Unlike previous attempts at extracting secrets, there are no second attempts. His success during the final chapter ultimately decides the ending players receive, and the best ending needs Poirot to be perfect. Of course, he’d expect nothing less. 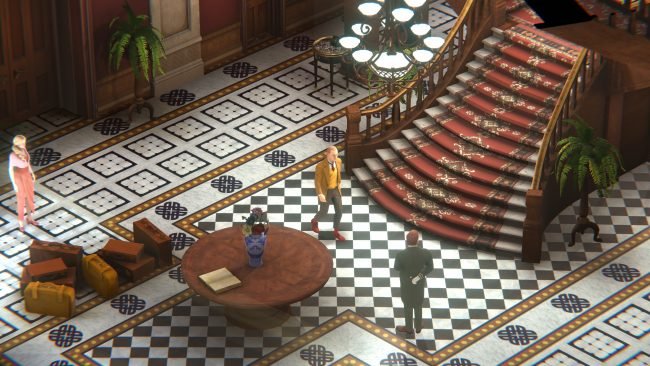 Those wanting to replay the game to get a different ending or find things that got missed will end up having to replay the whole ten hour story again because there is no chapter select option. If you’re unwittingly thrown out of a location before finding everything for a trophy because you’ve accidentally stumbled upon all of the important evidence or drawn all of the conclusions, you need to replay everything. Conversations can be skipped through but cutscenes have to be watched again in their entirety. This means it gets a bit quicker but it’s still a longer process than needed.

Poirot’s latest outing is a better proposition than The A.B.C. Murders a few years ago, but it’s not quite perfect. With no puzzles to solve, evidence that’s easy to locate, and mind maps where guidance is closely at hand, there’s very little challenge for adventure genre aficionados. The story is entertaining, Poirot is represented very well, and what gameplay exists has been created competently, but it sometimes feels more like a visual novel than it does a genuine adventure mystery game.