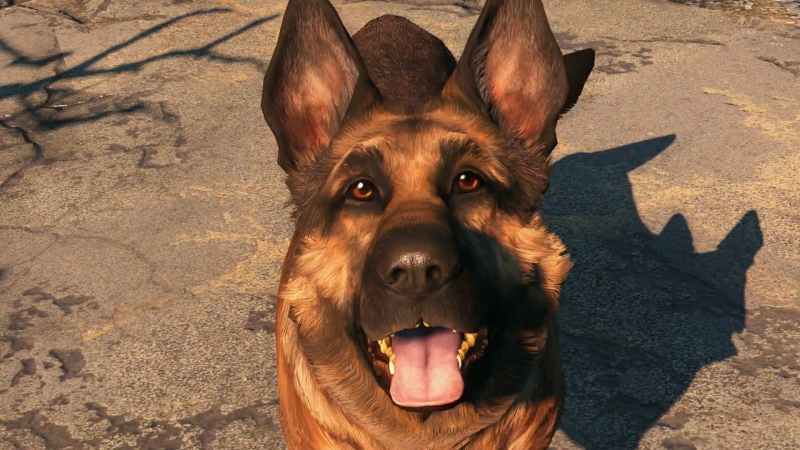 It’s always a sad day when someone in our community passes away, and that very much includes our canine companions that make life just a little bit better. We’ve learned that River, the dog behind that adorably helpful Dogmeat in Fallout 4, has passed away and we wanted to take a moment to honor this sweet puppers because dogs are too pure for this world and we love them with everything we have.

The news of River’s passing was shared via Twitter by Fallout 4 senior designer Joel Burgess. Burgess shared a heartfelt thread that detailed River’s eventful life, a life filled with gaming inspiration, lots of treats, and all of the pets a good puppers deserves.

Dogmeat is a tether. He grounds you in the world, will always stand by you, lead you to your family, and anticipate your needs. He wants you to be safe and happy.

In other words, he loves you.

And if love is River’s legacy, I am contented.

Dogmeat, in the game of Fallout 4, was a loyal companion that could help rebuild settlements, fetch needed materials, and was always there to offer a smile to the Survivor in a world where happiness is a rare find. It’s my firm belief that animals in games makes them infinitely better and having them as a companion (that does not get killed in-game, thank you very much) is the absolute best. Dogmeat is right up there with the Mabari from the Dragon Age series for me, a good boy just doin’ their best and making our lives a little bit better along the way.

Burgess detailed River’s life in the thread talking about how much this amazing little furball helped impact Dogmeat’s presence in the game. He even noted that River even won an award for her dutiful work with the game. River was the model for Dogmeat, but her facial expressions were what truly made her the perfect fit for the Fallout role. Where a lot of “working” dogs are known for their faces, River was known for her love. When the team was researching German shepherds for the role of Dogmeat, they were met with “countless images of Gerrman Sheperds snarling, all teeth and attack postures.” Not River. River has a smile that could light up the room, she could be guided easily, she took direction, and she shared her love with everyone.

Burgess went on to detail how everyone that came across River immediately fell in love with her and that the personality of Dogmeat was very much modeled after her. That’s even her voice you hear in the game as well!

“Dogmeat is a tether,” continued Burgess. “He grounds you in the world, will always stand by you, lead you to your family, and anticipate your needs. He wants you to be safe and happy. In other words, he loves you. And if love is River’s legacy, I am contented. Rest in peace, big girl.”

What you need to know before buying your first lens

The Best Trailers From This Year’s San Diego Comic Con