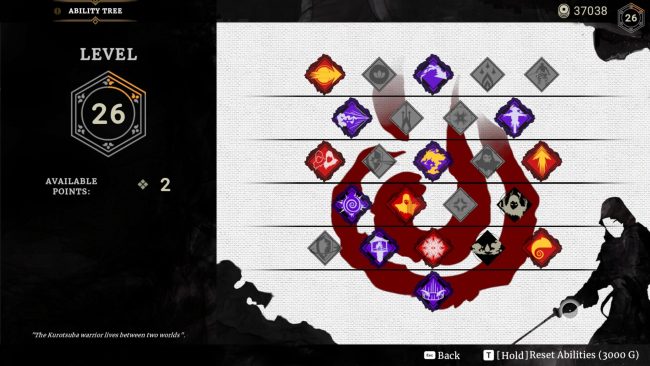 The Aragami franchise began with the game of the same name that was released in 2016. Five years later, Aragami 2 aims to expand on the supernatural stealth ninja formula introduced by the first game. The standalone game requires no knowledge of its predecessor to enjoy, which is really a good thing bearing in mind it is almost a completely different experience. Unfortunately a lack of challenge, a few bugs, and repetitive missions stop it from being a great thing.

The protagonist isn’t just any stealth ninja; he’s one of the last Aragami, an elite warrior struck down by a supernatural affliction that is gradually affecting his mind and body. The positive part of this is he can control and manipulate shadows through his Shadow essence power. After finding himself at the village of Kakurega, he is recruited by the Kurotsuba clan to save them from the oppressive forces of the Akatsuchi clan. By doing this, he may even find a cure that will stop him and the rest of the village from descending into madness.

From the safe confines of the village, the village elder sends the ninja through a portal to a small number of locations to complete his missions. Each of these is somewhat linear with some elements of exploration purely for the purpose of finding collectibles, like blueprints to unlock new items. Mission objectives tend to fall into three categories: kill targets, fetch stuff, or gather information. Between the limited number of locations and objectives, and that you constantly face the same types of enemies until much later in the game, the missions feel repetitive and the game unnecessarily bloated. As some do little to drive the storyline forward too, they could easily be removed to streamline the experience.

The Aragami has plenty of skills in his arsenal that help to liven things up and his skillset has changed from the first game. He keeps his normal stealth moves and the ability to double jump but he can no longer hide simply by crouching in the shadows. This means the teleport-like Shadow Dash ability has been tweaked. Shadows are no longer needed to perform Shadow Dash, but the Aragami can only dash to rooftops or ledges.

The first skill to be unlocked is Whisper. Instead of whistling, triggering the ability sounds like several spirit voices sighing to attract the attention of all nearby guards in the area, somthing that’s quite useful to pull guards out of their pattern. From then onwards, skills are unlocked as players see fit to spend their earned skill points. There are passive abilities like a reduced stamina cost of moves or becoming invisible when leaning against a wall. The most interesting are the shadow powers like summoning a shadow beast to kill a nearby enemy or creating a fog around essence crystal lamps. Each skill can be upgraded too, and the Aragami’s abilities can be customized to suit many different playstyles.

Skill points are earned by levelling up. Each mission is scored with the aim being to reach an S rank and the most XP you can earn. There’s little challenge in getting an S rank as long as the Aragami is not seen too often. Time is no objective with players able to plan their every move without needing to rush. The enemies are not bright either. They don’t spot the deluge of blood that pools everywhere when an enemy is dispatched, nor do they notice missing comrades even if they’re supposed to be having conversations with them. Instead they’ll carry on along their locked patrol routes, even running to catch up to where they’re supposed to be if they’re momentarily distracted and delayed. It makes things easier than they need to be.

If the Aragami is spotted, there is now the option to go head to head in combat if necessary, but this is easily the worst part of the game. All enemies seem to have more stamina than you do and quicker reactions. On the contrary, the Aragami’s actions felt clunky and unresponsive at times with parrying missing more often than it was successful. Facing more than one enemy almost certainly means death if the player chooses not to make a hasty retreat. There are no checkpoints, so death means being sent back to the start of the level. After the first death, players get a second chance to complete the mission and dispatched enemies remain dead and hidden. After the second death, the mission has to be restarted; there are no third chances.

The big problem is when some of those deaths come from the game’s bugs. Enemy soldiers will walk through walls or even teleport through floors to attack. They can patrol through scenery. They have eyes in the back of their head when “seeing” a body drop past a window. Whisper isn’t consistent in the way it attracts enemies. There is nothing more frustrating than losing a perfect run or even losing a life to enemies that do something they shouldn’t. The good news is the worst bugs have been fixed in a post-launch update and the ability to pause the game has now been added.

All of the missions can be played in co-op for up to three players and there is something satisfying about perfectly timed assassinations with your friends. With the exception of the tutorial prologue, all of the missions can also be replayed as many times as you wish from the noticeboard in the Kakurega village hub. None of the collectibles are missable, scores can always be improved, and more gold can be harvested from each of the levels.

Aragami 2 had potential to be a great follow up to an indie classic released five years ago. Unfortunately it lacks any real challenge and feels bloated with repetitive mission types and locations. The game starts to overstay its welcome after a while, but there’s definitely fun to be had before reaching that stage if you can put up with the plenty of bugs that still need to be fixed.