Following the feedback from players who took part in the second phase of the closed beta test on PS4 and PC last month, developer PlatinumGames has made Babylon’s Fall graphic improvements for visibility and clarity. Players on PlayStation 4 and PlayStation 5 will be able to try these out for themselves during the third phase of the closed beta, due to take place next month.

Throughout the first two phases of the closed beta test, players had been complaining about poor visibility due to the “classic fantasy oil painting aesthetic” the developer was using for the game’s graphics. Based on this feedback, the team has now improved “overall visual clarity” so that while the background still has the appearance of an oil painting, foreground details like clothing patterns or the wooden grain in the floor boards are now far clearer. 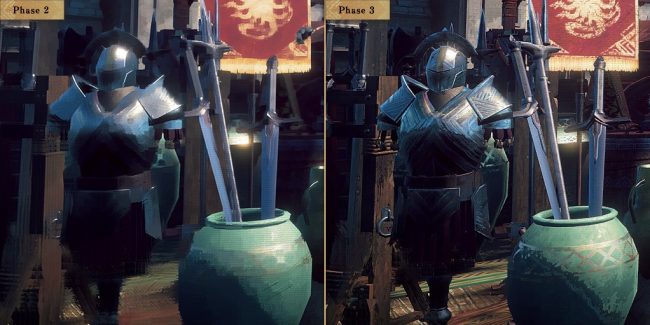 Other improvements include tweaks to make the gameplay feel more responsive and exciting. Aspects of Babylon’s Fall the team has adjusted include attack speed, combat motions, combos, and unique actions for every weapon. A new video shows some of the changes made to sword actions.

Publisher Square Enix has announced the next phase of the beta with Phase 3 due to take place on PC, PS4, and PS5. Unlike the previous phases, the test will take place across all three regions simultaneously. The test will begin at 1am PST on November 15 and will end at 1am PST on November 17. This time the closed beta will feature cross-play between the three platforms and players will be able to take on six different quests.

Applications to take part in the Babylon’s Fall closed beta have been reopened. Players have from now until 6:59pm PST on October 28 to apply to take part on any of the three platforms. Players must reside in Japan, USA, Canada, Brazil, UK, France, or Germany and be over the age of 17 to take part. Those who manage to get into the beta test will be notified by e-mail and can stream their gameplay experiences if they wish.