Balan Company is led by Sonic the Hedgehog and Nights into Dreams creator Yuji Naka. With that sort of pedigree, you would think that their old-school collectathon platformer Balan Wonderworld should be good. While some might not be entertained by the dated idea of a mascot-driven platformer, the idea in itself isn’t a bad one. What does hold the game back is it’s hampered by a fair number of strange design decisions that make it more difficult to play and confusing than it should.

Players take on the role of a troubled child. Emma Cole’s household maids are all whispering about her behind her back. Meanwhile Leo Craig is happily breakdancing before deciding to shun everybody and walk off in a mood for some inexplicable reason. Both stumble across the mysterious Balan Theater, where the permanently smiling Balan packs them off to Balan Wonderworld to find their hearts. The character of your choice lands on the Isle of Tims with a handful of bizarre birds that constantly demand to be fed yellow droplets. There’s no time to worry about that, though, as the first world is beckoning.

Balan Wonderworld Review – Why So Troubled?

The worlds break up into small islands until harmony is restored. Platforming between these islands is easy enough and usually has room for error, its difficulty seemingly aimed at young children. If anything, it’s too simplistic because each level is concentrated around the abilities of the game’s 80 costumes instead. All of these costumes have to be unlocked from a pink crystal, the key to which is often a very short distance away, is hardly hidden, and respawns after a short period of time. You wonder why they bothered with the keys and didn’t just let you pick the costumes up instead as the mechanic is so redundant.

Each of the costumes has its own ability, which is displayed by an in-game message the first time it is picked up. The problem is the message disappears too quickly leaving even the quickest of readers hitting the pause button to finish reading it in the game’s menu. Some of these costumes have very unique abilities, like the one that can skate on ice and won’t slide to your doom off the edge of the platform. Others have similar abilities, like the multitude that can throw projectiles of some sort. 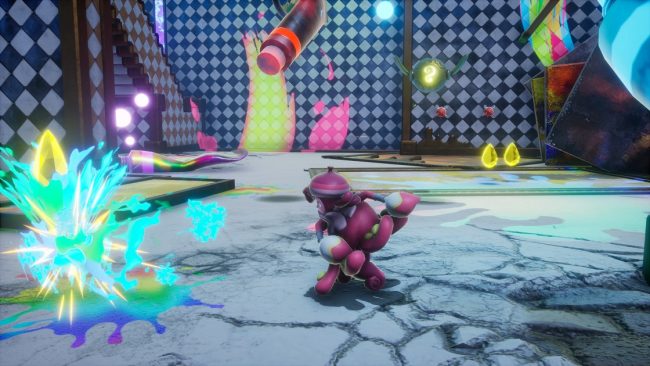 The theory is different costumes are needed to reach different areas of the level. Most levels will need to be replayed later with another selection of costumes to reach previously inaccessible areas. It’s a mechanic that’s worked for years in the LEGO franchise, but it falls flat here. One of those reasons is while a lot of love has gone into the costumes, some of these abilities are too specific to be of much use in the long term; for example, there’s a costume that lets players set up ladders in very specific spots not found outside of that level.

A second reason is each costume only has a single ability activated by any of the face buttons or triggers. In one of the most bizarre decisions Balan Company could conjure up for a platformer, this means not all costumes can jump. Only those with jump abilities or passive abilities that don’t involve the press of a button can jump. Now, if costumes could be kept permanently and freely swapped, this wouldn’t be a problem. Unfortunately neither of those conditions are true.

Costumes can only be swapped at checkpoints, only three can be chosen at once, and every death means the loss of the costume being worn at the time. There’s nothing more frustrating than realizing which costume is needed but not having it available because it got lost earlier, meaning tedious backtracking to fetch it again. One way around this is to “bank” multiple copies of the costume when its crystal is found, but this means having to wait around for keys and costumes to respawn. It also doesn’t avoid the situations when players are left trapped because their only available costume can’t jump and there’s no way out. There’s no quick checkpoint restart option either.

Things don’t get much better away from the costumes. All of the 12 worlds are set around troubled individuals who each need help to find their own hearts. There’s a farmer whose livelihood is destroyed by a tornado, and a painter whose work gets darker as she spirals into depression and self-loathing. Each of these characters seems to have an interesting story to tell, but it’s relegated to an admittedly well-animated cutscene that doesn’t play until after the world’s two platforming levels. The game fails to set the scene for each world until just before the concluding boss fight. The fact that it’s been left to a separate accompanying novel to fill in those gaps in the story gives a subtle hint of how little things are explained in this game.

The bosses are the best part of the game, each having their own unique design but with no explanation. Some are simple to defeat, while others are an exercise in frustration as players simultaneously try to work out what to do to defeat them while avoiding attacks and losing valuable costumes. Despite their size, each only takes three hits. Once defeated, players get a weird dance-a-thon inspired by musical theater to go with the happy ending cutscene.

After each level, players return to the Isle of Tims that acts as a game hub. Here the Tims need feeding but the game doesn’t bother to say why. Players can feed them the different colored teardrops found throughout each level. Once they’ve eaten enough, they grow bigger. Throwing another Tim at them when they’re at their biggest then causes them to lay an egg. From this another Tim is born. The game never states why so many Tims are needed either, but those who want their own Tim empire can also find eggs throughout the levels.

After consulting Square Enix’s external Tips and Tricks guide, it turns out that feeding the Tims different colored drops should mean they change color but this doesn’t always work, with some Tims remaining the same color regardless of what they eat. Different colored Tims have different abilities, but this isn’t explained either. Apparently, red Tims will attack enemies while pink Tims will find objects. This seems to have little meaning anyway as players can’t choose which Tims they feed nor which five they take with them into a level.

A mysterious structure known as the Tower o’ Tims is being constructed in the middle of the island. There’s also a statue that can be fed multicolored raindrops found throughout the levels or earned for replaying them. The game doesn’t state the purpose of either of these, leaving you to wonder if they’re worth bothering with. While the teardrops are seemingly important, the most important collectibles actually turn out to be the gold Balan statues because they’re needed to unlock later levels. If you don’t have enough statues, you’ll need to replay levels until you do.

These statues can also be earned through the worst part of the game, the repetitive Balan Bouts where the animations are constantly reused. Here players have to endure 4-6 QTEs where they have to match a button press to a shadow lining up with Balan. Levels start off with one short bout per level, but become incredibly tedious when there are three longer bouts in the latter levels. Each must be performed perfectly to get a statue and they’re far more precise than the platforming. Get one button press wrong and the whole level must be replayed because the bouts don’t respawn and can’t be accessed any other way.

Balan Wonderworld feels like it’s shrouded in mystery because there’s a woeful lack of explanation for the majority of its mechanics. Nobody should be left looking for external guides to gather even the most basic information for a game aimed at children. When added to the frustrating management of the game’s costumes (including those that can’t jump in a platformer), its underdeveloped story, the overly simplistic platforming, and the tortuous Balan Bouts, this is a game that had promise but is ruined by a multitude of bizarre design decisions.

Dauntless’ new patch is all about timey-wimey monster slaying

PSA: PlayStation Summer Sale 2022 Will End in a Week

How to Switch Between Party and Game Chat on PS5