Even this far into 2021 Netflix’s expansion into the anime space shows no signs of slowing down. In fact last October, the streamer added weekly releases of new original comedy series Blue Period (Saturdays) and slice of life series Komi Can’t Communicate (Thursdays) and each series has new episodes set to release through December.

Now that you’ve done the annual (re)watch of the 7 Essential Anime Every Fan Should Watch, and rejoined Baki on his quest to become the most powerful fighter in the action-packed with the arrival of the ten episode season of Baki Hanma, it’s definitely time to revisit what the streamer has on offer and refresh the best anime series list.

Keeping up with and deciding on anime series to watch is always a marathon not a sprint and any “best of the best” list should be a constantly evolving mix of entry-level first (and forever) favorites, die-hard must watches, lesser-known gems, and what’s new and exciting in the genre.

So as we revisit, and repave a path through the Netflix anime series library, do expect to see genre staples, like Death Note and Neon Genesis Evangelion, and fan favorites, Fullmetal Alchemist: Brotherhood, eventually (re)appear alongside newly acquired shows and potentially even a few anime(inspired) original series, like Castlevania, that are making waves in the anime space. And as always, the new additions to the list are added to the top and marked with an asterisk.

Or follow these links for the best of other genres:

Note: As this is a list of anime series and shows to watch, no anime movies were considered for this feature. Also, this list pertains to U.S. Netflix subscribers. Some titles may not currently be available on international platforms. This page is periodically amended to remove anime series and seasons no longer available to watch on Netflix, and to include great anime shows that are now available for streaming on the service.

Based on the wildly popular manga series, this multigenerational story follows the adventures of a Joestar family member – each with the same titular nickname and endowed with immense psychic strength – as they battle against rivals (and evil) down through the ages. With each new protagonist comes an independent story that expands the universe and keeps the narrative fresh and engaging. It’s sly wit and frequent hattips to popular Western trends add just the right amount of hilarity to this adventure-driven fantasy. With five quality seasons (Stone Ocean being the latest installment) now available on Netflix as of December 1st, JoJo’s Bizarre Adventure’s addition to the best of list may just be a bit overdue.

Cowboy Bebop’s set in a world where a hyperspace gateway accident’s left Earth inhabitable. What remains of humanity colonized the rocky planets and moons in the solar system. Fifty years of rising crime prompts the Inter Solar System Police to legal bounty hunting and authorized hunters, known as Cowboys, to track and capture criminals across the system in order to bring them to justice. The series follows the crew of spacecraft Bebop as they hunt down criminals in 2071. This Japanese sci-fi noir and it’s now iconic soundtrack and vintage (but still solidly stylish) animation style offers up the space (mis)adventures of former syndicate member and hitman Spike, his former ISSP officer partner Jet Black along with a con artist with memory gaps, a wacky hacker and Ein a too-cute- for its own good genetically engineered Welsh Corgi with human-like intelligence.

The twenty-six episode series offers a genre-blending narrative, visually kinetic action, and audacious good fun for long-time fans and is a great place to start for those new to the anime space. Only time will tell if dropping the entire anime run just ahead of the live-action Cowboy Bebop November 19, 2021 premiere helped or hurt the movie franchise. Be sure to check out how IGN thinks film adaptation stacks up against the source material. 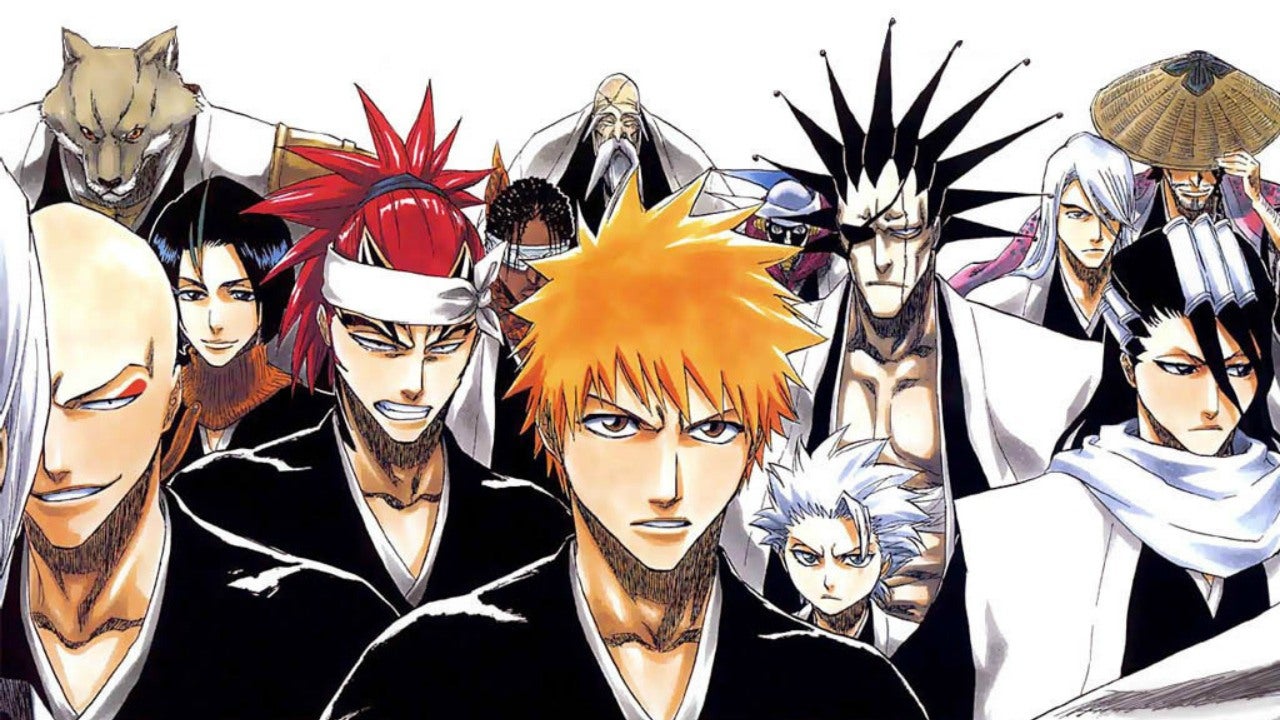 Bleach is based on the massive manga run written and illustrated by Tite Kubo. It’s adaptation played a pivotal role in mainstreaming anime in the US. A fateful series of tragic and extraordinary events turn Ichigo Kurosaki from ordinary high schooler to a Soul Reaper. But when the Soul Reaper who granted him use of her powers is unable to regain them, Ichigo must not only master these new abilities but pick up the fight tracking down the corrupt spirits known as the Hollows to keep them from devouring human souls. Bleach is best as a gateway into anime; the first three seasons are possibly the best of the entire run. They are tense, action-packed, witty, and character-driven. With the promise of a new arc about the Thousand-Year Blood War in the offing for 2022, now’s a good time to start that series re-watch.

If you prefer your shounen occasionally NSFW and built on a narrative designed to explore themes like prejudice, choice, introspection then Beastars may be the slice of life fantasy series for you. This drama-heavy mystery series digs into the lives of anthropomorphic animals; where carnivores and herbivores are trying to coexist peacefully. If Zootopia-eques that dig into slice-of-life stories and self-discovery are what grab and hold your interest then Beastars is definitely an anime series for you. 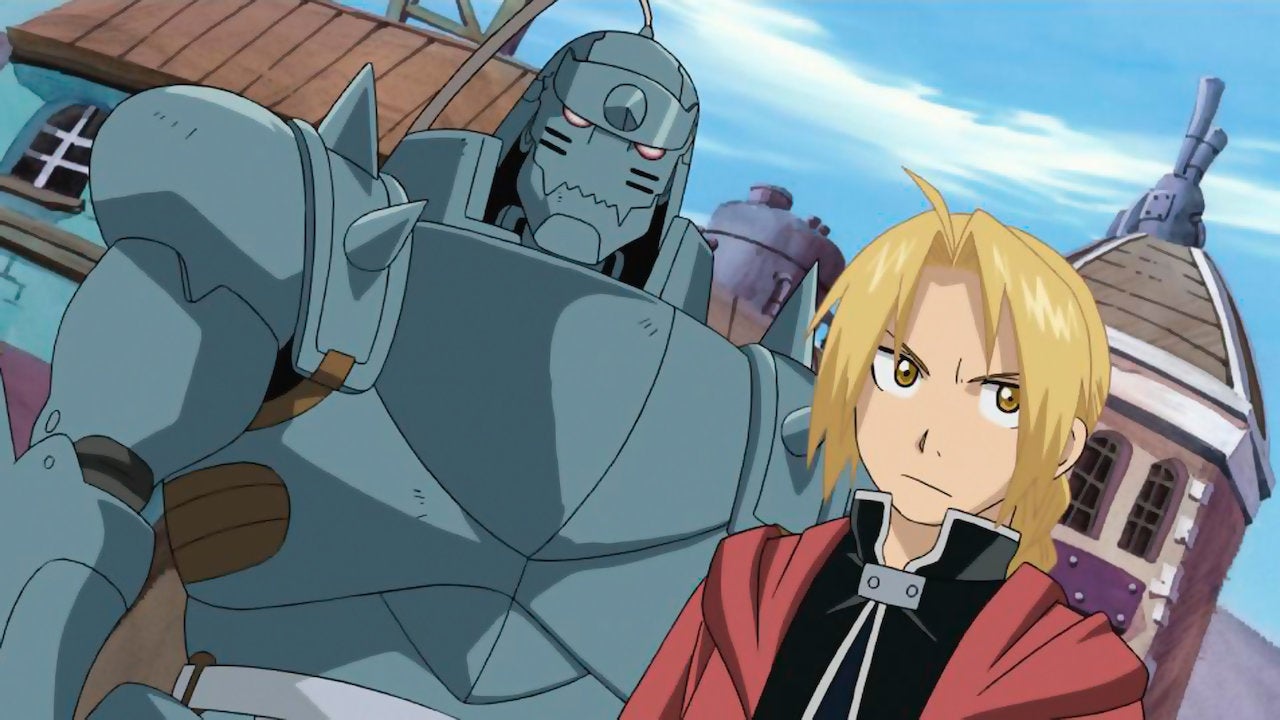 Fullmetal Alchemist: Brotherhood follows the journey of brothers Edward and Alphonse as they try to adjust to a new reality after an Alchemy experiment, intended to resurrect their mother, goes horribly wrong. Arguably one of the best anime series in both animation and story adaptation, FMA Brotherhood balances kinetic action with exploring heavy themes as these brothers wrestle with their failures, embrace their powers and head out on a quest to find the Philosopher’s Stone that can restore their bodies; all why battling a great conspiracy that puts the whole world in jeopardy. Netflix still has all six-three episodes in their library and this story is worth every minute. 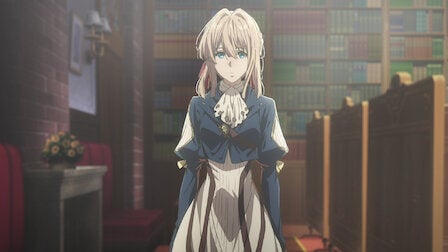 Based on a light novel series this thirteen episode show brings to life a story of post-war reintegration into civilian life through the lens of fourteen-year-old Violet Evergarden. This fantasy coming-of-age story tells the tale of the young orphan’s attempt to find purpose beyond soldiering. It’s an introspective and touching narrative with a phenomenal score. This series is why phrases like “visually stunning” won’t soon go out of use. It is simply one of the most beautifully animated series around.

Now’s an excellent time to revisit this show then pick up with Violet Evergarden: The Movie added to the streamer on October 13, 2021.

Your Lie in April 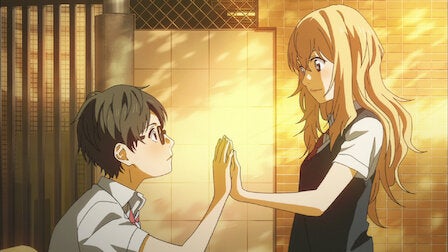 Based on the manga series of the same name, Your Lie in April follows piano prodigy Kousei Arima as he rediscovers his love of music, and ability to hear his piano in the aftermath of his abusive mother’s death. This show aims right for all those emotional weak spots as it takes you on a heartfelt journey full of music and drama. The pastel-drenched color palette and deceptively straightforward narratives will reel you in and make you a believer in music-driven stories henceforth. 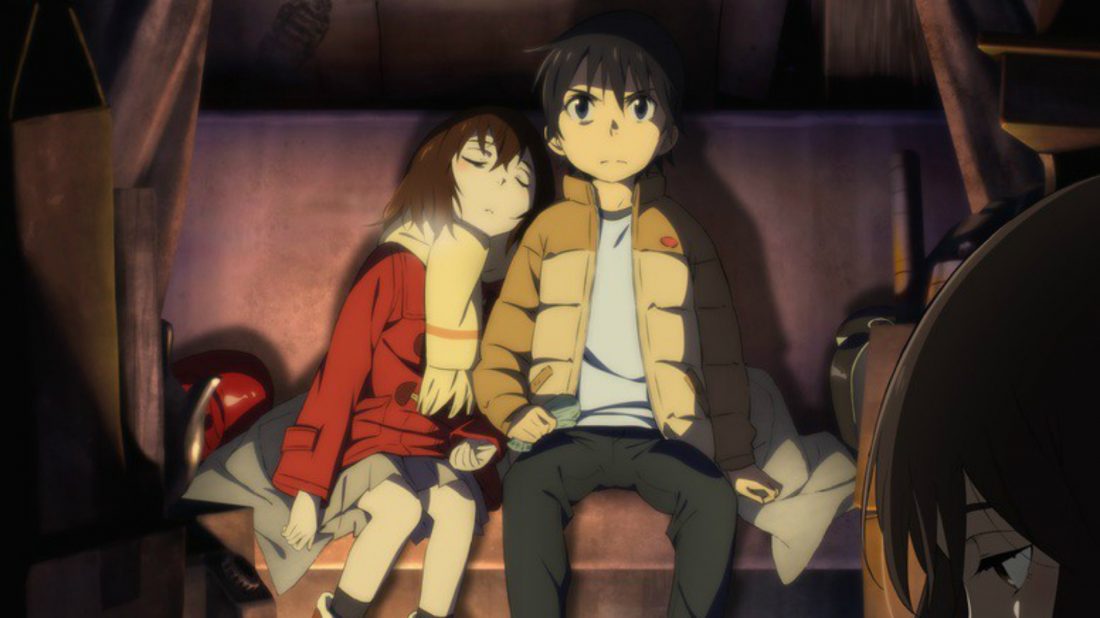 Follow 29-year-old Satoru Fujinuma as he discovers an ability to time travel and ends up in the past trying to solve a murder mystery. This powerful ability he calls “Revival” permits him to jump back to the recent past (a few minutes) to change events and save lives. But after being accused of a murder himself, however, Satoru wakes up, as his younger self, eighteen years in the past. Soon realizing the crime he’s accused of is connected to an abduction and death of a classmate, Sartoru strikes out to unravel the mystery, prevent his classmate’s death, and ultimately clear his (future) name. Erased is a gripping adaptation of Kei Sanbe’s full manga run. The story is dynamic and brought to life through gritty and immersive animation. Set aside time, because it’s a binge-worthy series. 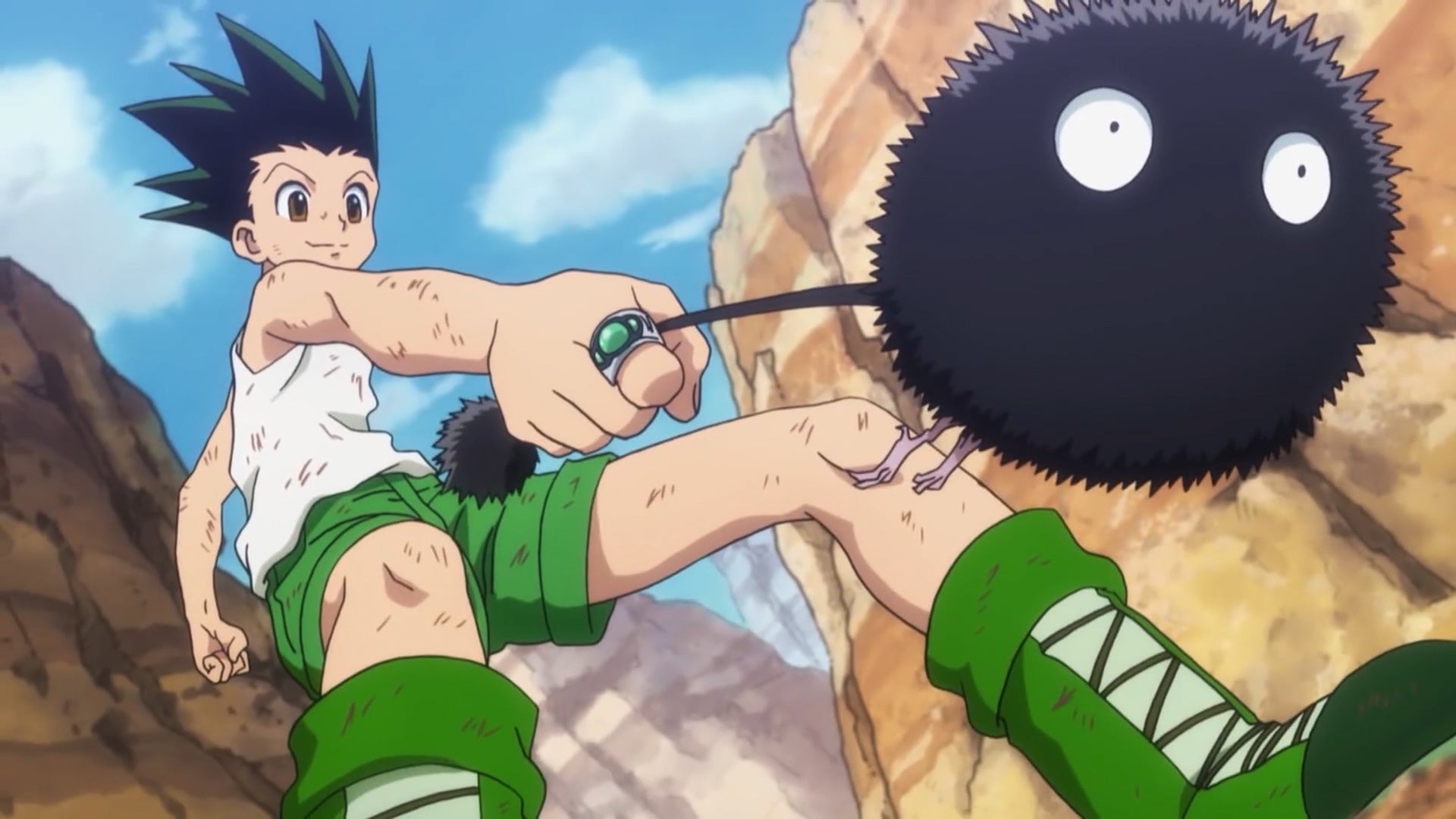 It’s pronounced Hunter, Hunter (the x really is silent). Young Gon sets out to find his missing father. Along the way, he makes new friends, enters a martial arts tournament, and comes face to face with creatures – on his quest to become a Hunter – that any horror prop master would kill to get their hands on. Gon’s enemies have zero chill so between the action sequences and well-crafted story Hunter x Hunter is some of the best shonen anime has to offer, ever. Come for the familiar premise, stay for the character depth, darker tone, and its engrossing and increasingly complex story arc.

The Disastrous Life of Saiki K. 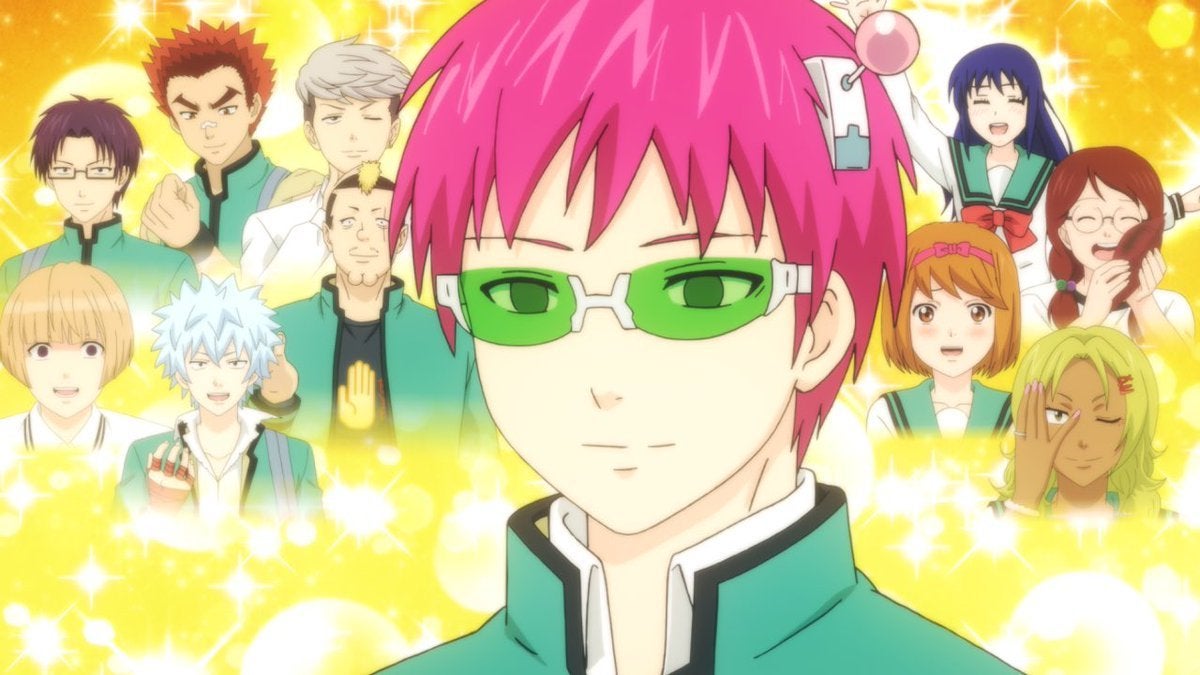 All-powerful psychic Kusuo Saiki attempts to fly under the radar are continually thwarted and result in a high comedy. The Disastrous Life of Saiki K. follows Saiki as he tries to navigate school drama free despite his magnetic ability to attract people. It’s quirky, full of lovable characters, and hijinks. Despite its lighter tone, The Disastrous Life of Saiki K. offers a quality crowd-pleasing story. 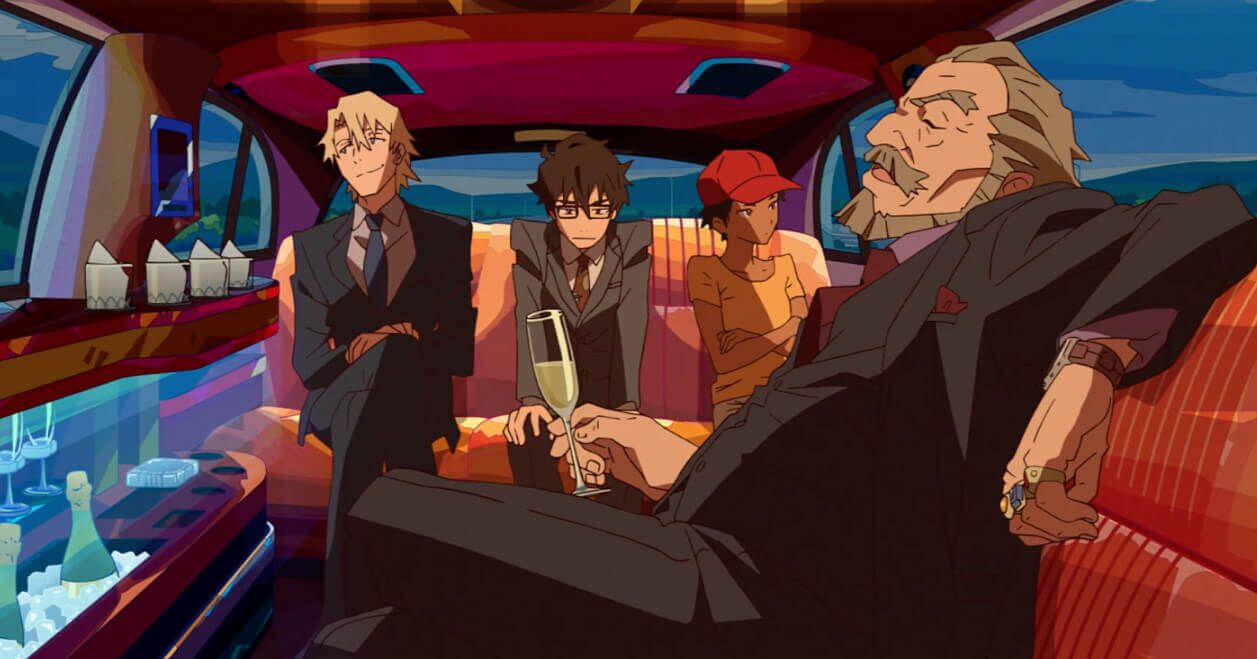 Makoto Edamura’s a con man on the run. But don’t think that’ll stop him from falling head-first into new schemes instead of laying low. The Great Pretender is colorful, quick-step, offering all the elements of a perfectly designed heist film. If you like your anime stylish and your character’s too-slick for words, then this Netflix exclusive is tailor-made for you. 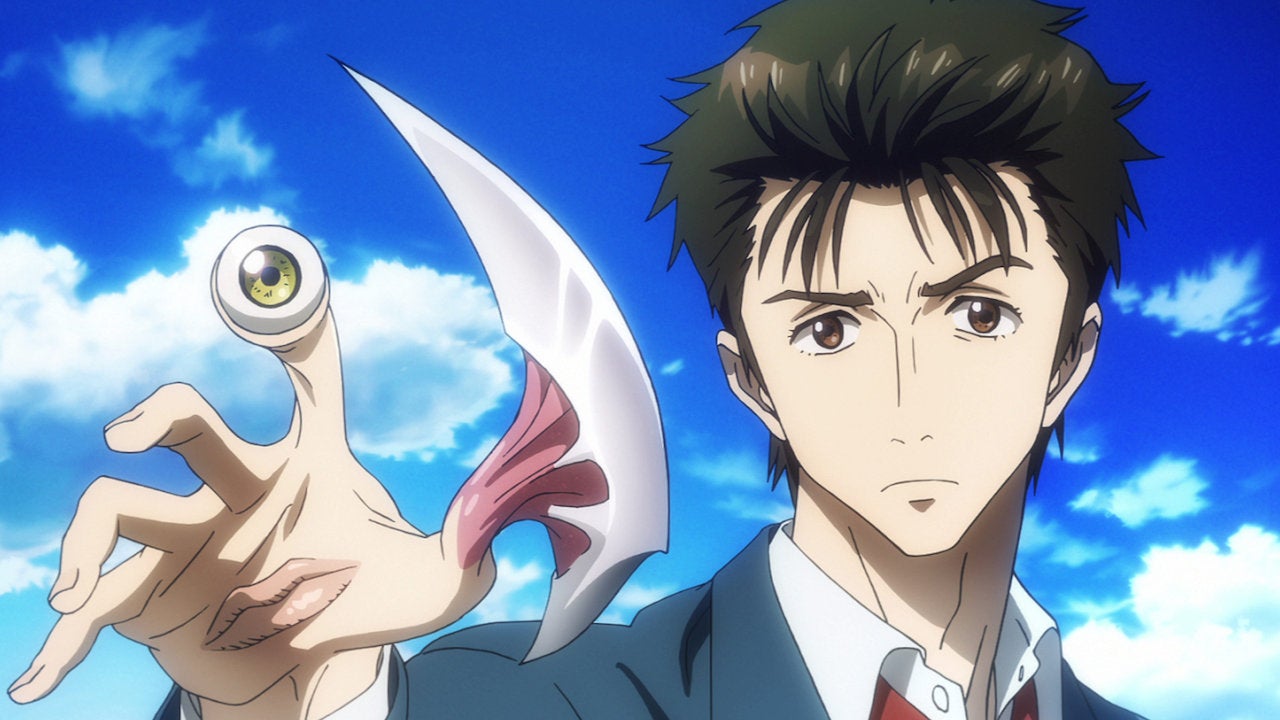 Based on the horror manga series by Hitoshi Iwaaki, Parasyte (re)sets the bar for horror anime. This stunning blend of sci-fi/horror isn’t just for horror fans. If you like your storylines built on dark humor and complex character development then following Schinchi Izumi as he struggles to establish a symbiotic relationship with the alien parasite intent on taking him over then, Parasyte is an absolute must watch.

November was a slower anime month, but that just means that Netflix’s continued love of Mark Miller and his Dark Comics culminating in the debut of his first anime Super Crooks Thursday, November 25th, 2021 was right on time. You just can’t go wrong with a heist crew set to take on a world-renown supervillain. And December’s starting off with a bang because Shaman King’s finally slated to return December 9 with part two of season one that aired earlier this year. Set aside some time, Part two brings another 13 episodes following Yoh Asakura on his quest. Aggretsuko’s been on the best anime series list before and if upcoming season 4, dropping Dec 6, 2021offers more of the same rollercoaster ride that is Retsuko life and social circle, it’s like to reclaim its place in short order.

How We Choose the Best Anime Series on Netflix

The goal is to have a list of great anime series that span many subgenres. We’ve included a mix of popular classics like Fullmetal Alchemist: Brotherhood and JoJo’s Bizarre Adventure, along with relatively more obscure titles like The Disastrous Life of Saiki K. Whether you’re a complete anime newbie or a hardcore otaku, there’s something for everyone here.

By World Games1 second ago0
IGN

By World Games1 second ago0
IGN

The Witcher 4: Polaris Is At Least Three Years Away

By World Games1 second ago0

Final Fantasy and Assassin’s Creed Are Joining Magic: The Gathering

By World Games9 seconds ago0
IGN

By World Games24 hours ago0
IGN