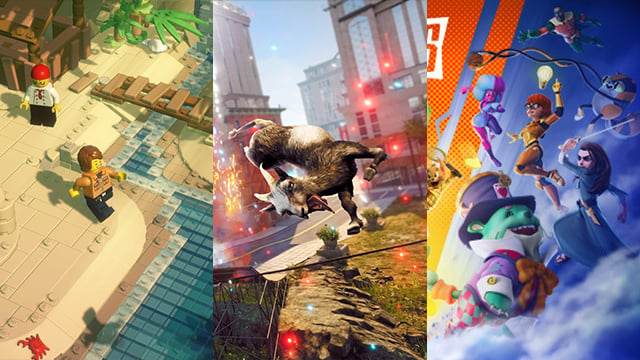 This Thanksgiving, PlayStation LifeStyle and its sister site GameRevolution are saying “thanks” to their favorite games, consoles, and developers.

Hunting down PS5 games for family celebrations like Thanksgiving can be tough going. Thankfully, we at PSLS are here to help! The eight games listed below are all family-friendly and guaranteed to entertain during Thanksgiving 2022 celebrations.

Whether it’s a single-player experience that can be enhanced by multiple players providing puzzle hints and tips, co-op gameplay where teamwork is key, or a multiplayer battler where family and friends turn into rivals, there’s plenty to play this Thanksgiving!

Experience all nine Skywalker movies in Lego Star Wars: The Skywalker Saga. Players take on the roles of both heroes and villains as they experience the blocky retelling of Anakin, Luke, and Rey’s adventures. What’s more, the entire game can be played in local co-op, making it great for playing with family.

Goat Simulator 3 continues the chaos with up to three friends in local (or online) co-op. Grab some extra controllers and enjoy split-screen gameplay with multiple goats causing chaos in the brand-new open world. There’s sure to be laughter as players try to master the game’s wacky physics.

MultiVersus takes the Warner Bros. roster of characters and mashes them together in a free-to-play fighting game. There’s Tom and Jerry, Wonder Woman, Bugs Bunny, Batman, Marvin the Martian, Arya Stark, The Iron Giant, and many more all waiting to duke it out across WB-inspired stages. Up to four players can battle locally, so grab those extra controllers, dish them out to your family and friends, and wrap up Thanksgiving with a tournament.

Sonic has still gotta go fast in Sonic Frontiers, though this time around the blue hedgehog finds himself in a much more open world. This world is filled with short puzzles that require clever thinking, skillful gameplay, or a combination of both. Though it’s a single-player experience, Sonic Frontiers benefits from having multiple people trying to beat the time trials and solve puzzles.

While the apocalypse setting might seem bleak, Stray’s focus on a cat’s adventure through troubled environments is ultimately charming. Much of the gameplay involves trial-and-error puzzle action, though there is the occasional intense chase sequence where an adult may have to take over!

Stray is a short game and so is ideal for those short yet sweet Thanksgiving evenings. It’s also included in the PlayStation Plus Extra and Premium subscriptions, making it easy to access.

Cult of the Lamb

A game about a cult might not sound “family friendly,” but aside from some fantasy violence, Cult of the Lamb is actually a wholesome village sim crossed with a roguelike dungeon crawler. I can picture an older gamer navigating through the dungeon experience and then letting the younger player design the village.

Lego Bricktales is a visually stunning puzzle game that invites players to explore beautiful Lego dioramas and help the people inhabiting them. Players can get creative with the solutions they build, which demands creativity, while the puzzles can often require some careful thinking. It’s a chilled-out experience, too, making Bricktales great for winding down after an exciting day of celebrations.

Though it was released late last year, The Jackbox Party Pack 8 deserves a mention due to just how perfect it is as a family-friendly game that can be played during Thanksgiving or other family celebrations. Up to 10 players can join in the fun locally with just their phone or tablet. Games include: Drawful Animate, The Wheel of Enormous Proportions, Job Job, The Poll Mine, and Weapons Drawn.