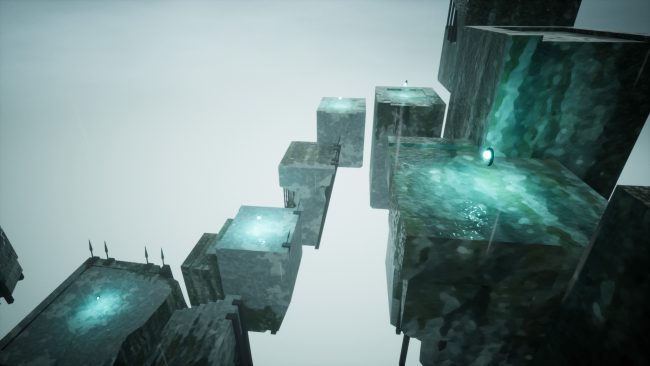 A desolate and abandoned world, only decorated with the remains of life at both its best and worst. Considering the current state of our real world, this game’s setting is nothing short of intriguing. Blue Fire is a 3D platformer game filled with puzzles, combat, and mystery that the player slowly uncovers as they explore the vast and empty chambers of a castle. Developed by ROBI Studios and published by Graffiti Games, this indie platformer has a unique art style that is both mystical and decrepit. Bursting with atmosphere, the castle of Penumbra begs to be explored as you leap, dash, and cut through the mysterious floating castle that remains hidden to the world.

Blue Fire PS4 Review – In a Not So Distant Land…

At the beginning of the game, the player is shown various rooms abandoned rooms that are apparently the result of some sort of calamity. It is in one of the empty and dilapidated rooms that we are introduced to the main character, floating in a test container which must be broken through. Our pint-sized hero is completely bad ass, equipped with twin broadswords, a cracked mask, and a tattered cloak. As you roam through each of the rooms, the player can begin to piece together what appears to be the story of Penumbra and its origins. Inspecting objects and furniture provides short excerpts of an alchemist’s notes or even game tips; but if you rather just power through this game without exploring the environment you’ll be missing out.

With a bit of snooping we find ourselves in Penumbra, a floating castle. Penumbra was created by five of the six Elemental Gods to protect themselves from the sixth God, who was so full of hatred for the other Gods. He took his own life and became a Black Shadow, the result was a catastrophe of death and destruction. Many were lost in the war between the shadows and the remaining Gods that lasted a thousand years. Fearing the worst, the five Gods combined their powers to create the floating castle of Penumbra that hides from the Black Shadow and protected by the essence of the five Gods, the power called Blue Fire.

Blue Fire does have a similar format to FromSoftware games; but with a few key differences. The most notable difference is how cute the enemies and main character are; the game is meant to be atmospheric and the art style allows the player to focus not so much on the characters, but the environment. Emphasizing platforming over combat, Blue Fire incorporates platforming into a large portion of its gameplay. Simply moving around Penumbra the player must be quick and light on their feet. Thankfully the controls make maneuvering around simple; Umbra feels quite floaty but not to the point that he would slip off jagged cliffs.

Taking a different approach to leveling up, Blue Fire does use the spoils of battle to upgrade Umbra but not as currency. Enemies drop shadow fragments which can be used to increase Umbra’s mana; the only way to use these fragments is at a fire shrine. Fire shrines are activated by paying the amount due, usually ore that Umbra finds in barrels or boxes throughout Penumbra. Once activated the player can save, upgrade Umbra’s mana and equip spirits; spirits are a feature that is introduced later on in the game once the player meets the Spirit Hunter.

Blue Fire PS4 Review – Devoid of Life, One Must Enter the Void

Throughout Penumbra you can find small cracked floating boxes; these enigmatic boxes serve as an upgrade tool for Umbra.  First introduced by Von, the Fire Guard who discusses his struggle to protect Penumbra alone and his excitement at your arrival. Von explains the purpose of the void boxes and how they are key to Umbra’s growth as previously mentioned. The void boxes are a great way to increase Umbra’s overall health, however they are quite challenging to complete. The introductory void box was simple platforming but as the player progresses through the game these voids increase in difficulty dramatically.

If platforming is not your forte, you will struggle to complete the void stages throughout the game. I am a member of the platforming struggle group and let me just say the second void stage was rough! However, Blue Fire makes these stages optional, and the player may choose to avoid them altogether at the expense of struggling in boss battles later on due to low health. The player can always return to a void stage later on to retry, and there is no penalty for trying again later, which is pretty cool.

While void stages are optional it is beneficial to complete some of them, especially true if you struggle with Blue Fire’s combat system. Umbra can dash and block attacks but there is a risk and reward system attached to these abilities. To dash the player needs to be aware of their environment, otherwise you can dash right off a cliff. Although most battles take place in flat areas there are some places where dashing can become precarious. Leaving no room to dash shielding is usually the only option, and while the player can negate incoming damage the cost to do so is mana.

Blue Fire is a simple game with depth in its story, environment, and gameplay, however there are some hurdles to overcome. While this game is like FromSoftware games there is no commitment needed to see progress, the effort is required in the form of platforming. As previously mentioned if you struggle with platforming Blue Fire will be a struggle for you. Void stages and some areas of certain regions can prove difficult to traverse; but with some practice players can get to the next destination.

Blue Fire does not punish players for exploring their environment and that is further reinforced with the addition of side quests you can pick up along the way. Despite the difficult platforming the game does not feel overwhelming to complete, and there is always a benefit to revisiting old areas. There is always a missed breakable object or an emoting statue that was forgotten; one should not underestimate the power of emoting.