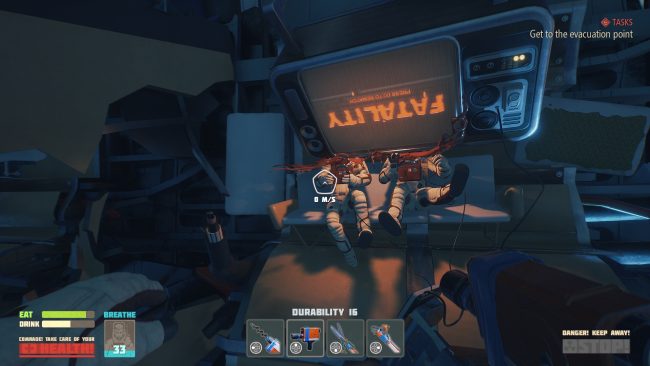 If you’re looking for a survival game that doesn’t take itself too seriously, developer RedRuins Softworks thinks they have just the thing with their game Breathedge. It may have released in 2018 on Steam, but the game has now been ported over the PlayStation 4. Drawing inspiration from games such as Subnautica, is this deadly trip to space worth your space bucks? Find out in our Breathedge PS4 review.

When Breathedge is first booted up, the game shows its controls, and then tasks the player with plugging a leak—leaks are no good in space. One of the buttons, square, is mapped to “fly.” But this isn’t fly as in fly around in space, this is fly as in the zipper on your pants. Pressing it causes the player to urinate on whatever is in front of them. If this is done in the cold vacuum of space, it can quickly lead to the player freezing to death. Urinating on electricity is also not recommended. An immortal chicken is always in the player’s left hand, and can be used as a tool in many different situations. Right off the bat, Breathedge lets you know that it doesn’t take itself too seriously.

Having said that, though, the early hours of Breathedge can be a struggle to those who are easily distracted, and this is a game full of distractions. Any time the player is out in space or an area that has no oxygen, they immediately begin consuming their supplemental oxygen. The initial supply lasts a little over a minute, which results in a lot of short trips outside the player’s ship to grab a handful of supplies, then rushing back inside to refill their oxygen.

The game does very little handholding, and expects the player to figure most things out on their own. For instance, sleeping restores any health lost, but this is not shown unless the player interacts with the bed in the ship. Hunger, thirst, radiation, and temperature must also all be monitored, and too much of one or too little of another can also cause death. There are dozens of recipes for things to build at “processor” desks, most of which must be learned by the player collecting resources or scanning items once a scanner is built. Breathedge may not take itself seriously in many regards, but it takes its survival elements to heart. Figuring out how to survive is quite rewarding, and provided the player watches their oxygen levels in the early going, survival isn’t all that challenging.

Do you like death? Weird question, but Breathedge features a lot of death. Not necessarily of the player, though that can easily occur with one badly timed trip outside of a compartment by running out of oxygen. But the space liner that crashed in the beginning of the game apparently had a lot of souls onboard, and many other people died as they lived out their last moments. Breathedge takes a lot of liberties with gravity for this setup, but the result is worth seeing just for the absurdity of it all.

There are people who were squished by equipment, with their entrails frozen and floating in place just in front of them, others who were somehow reduced to a skeleton in space (where no desiccation could actually occur), and even one guy who was going to die anyway as his wife had wrapped a condom around his face when she found out he was cheating on her. That last one is definitely a reminder that despite appearances, Breathedge is not really a game for younger children. Each death is setup like a diorama, where the player can float around the scene and find useful objects that you might see in such a location. Sure, this completely ignores the effects of gravity in that the diorama-like scenes are stationary, but they are fun to look at and loot.

As with most survival games, expect to do a lot of resource collecting in Breathedge. Debris is scattered throughout the game, ranging from generic substances like ice and metal, to more specific things like batteries, resin, titanium, rubber, manure, and condoms. Thinking about sex in space is probably something most people don’t do too much, but the deviants at RedRuins apparently thought about this, a lot. A voiceless character named “Babe” shows up on the player’s communication device early on in the game, and they have an avatar that is nothing more than a random woman’s ample cleavage. She mentions that she wants you to come rescue her, and while she does point out places of interest throughout the game, she also seems to want you to die in gruesome ways. It’s a funny way to progress things along, but it may also give the player reason to not go to some points of interest out of fear of dying.

Breathedge is probably the type of game you want to finish within a few sessions. Since it doesn’t tell you what to do, with only vague waypoints to mark objective locations, it can be real easy to forget what you were doing if you stop playing for just a few days. Its irreverent sense of humor does make your mistakes entertaining, and survival is never too hard of a task. Average play time appears to be 20 hours for most players, so this is something that can be completed in a few days. Breathedge doesn’t overstay its welcome, though of course completionists can expect to spend an additional ten hours or so finding all collectibles, earning all in-game rewards, and seeing all the little diorama-like showcases of various forms of death.

The Unreal Engine powers the fleeting life of Breathedge, and some of it is breathtaking. While character models and the general art style is cartoonish, the surrounding asteroid field the player ends up stranded in looks fantastic. God rays can be seen when objects occlude the suns of the solar system the game takes place in, and the size of some of these structures can easily make the player feel small by comparison. This does result in lengthy travel times when moving around by space suit, but finding vehicles and crafting others does speed this part up a bit. When the view is so nice, though, it’s easier to not mind the travel times so much. Breathedge also runs quite well as it seems to be well-optimized, with a consistent frame rate throughout the adventure.

If you want to find yourself chuckling at one absurd look at the future of space flight, and can handle yourself in survival games, then by all means check out Breathedge. Its humor may not appeal to everyone, but beyond that the beautiful views of space wreckage mixed with a decent challenge of avoiding death provide for an entertaining couple dozen hours of playtime. Building out a space station is its own reward, as are the in-game rewards. Enjoy yourself out there in the vast nothingness with your immortal chicken, wits, and maybe a wrench or two.

Breathedge review code for PS4 provided by the publisher. Version 1.02 reviewed on a PS5. For more information on scoring, please read our Review Policy.

Award-Winning Critically-Acclaimed Title, Hades, Has Been Rated for the PS4