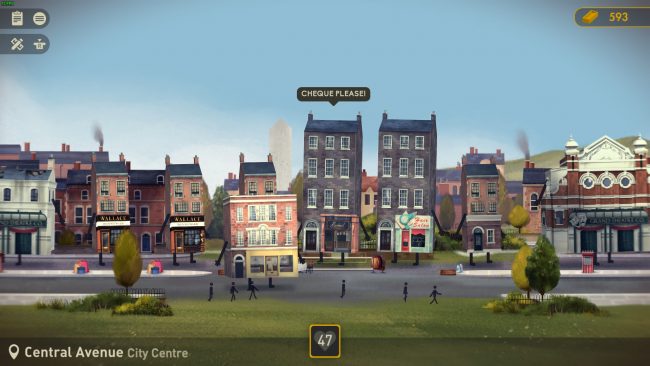 Buildings Have Feelings Too has a unique premise. The game is advertised as a “city-management/puzzle game about buildings and the city they inhabit.” While the city management descriptor is technically true, those expecting anything like SimCity or Cities: Skylines will be disappointed. The title is actually a puzzle game where players need to decide the best placement and combination of buildings to complete objectives, all while appeasing the buildings’ feelings at the same time.

This is a city where nearly all of the buildings can walk around and talk. Each of them wants to be the very best it can be, but things are starting to go wrong. A warehouse is being demolished in the Dock Yard. He thought he was made to last but his façade has deteriorated too much. There’s no money coming in anymore, the jobs have gone, and it’s time to rejuvenate the area. That task falls to a nondescript building that I later found out to be The Halfway Hotel.

Buildings Have Feelings Too Review – If The Walls Could Talk

The game takes place in side-scrolling streets that have a restricted amount of building room. Players start off with a fixed budget too. Each level gives a list of tasks to be completed that mean buildings need to be placed in specific combinations. There’s not much scope for players to make their own choices as the limited amount of building room and resources mean finding the most efficient combinations to complete each of the game’s eight campaign levels. The ninth sandbox level is the closest players get to really creating their own city.

The story begins on a street with a grocery warehouse and a multistory building containing rented rooms. Things start off simple. The duo wants the company of another building, but the factory that gets built isn’t quite what they had in mind. They guide players through moving stuff around and upgrading buildings. Despite the title, few of the buildings seem to have feelings, although all have stick arms and legs. Some will tell the hotel about how they want a change of career, or they feel too run down to be of any use. Most of the others have a couple of  witty lines but that’s their limit. Literally all the buildings do is issue tasks and occasional instructions.

Then things get complicated and the difficulty ramps up. Now the tasks require players to construct and upgrade more buildings. Upgrading buildings requires criteria to be met, usually a certain combination of shops, residential, office, leisure, or factory buildings. This makes the buildings appealing. New areas of the street can also be unlocked to give more building space. Bricks are needed for building, repairing, and unlocking areas. Players can add to their brick allocation by completing objectives and upgrading buildings. Careful brick management is even more important because resources are carried between levels.

The tutorial does a great job in the first level but then leaves players to discover the game’s mechanics by themselves. Some mission criteria can seem vague but this is only because the game hasn’t told you how everything works. I came to a shuddering halt at level 5 because the task wasn’t possible the way the game implied. Instead there was a mechanic I didn’t yet know about, and I was still learning things during the last campaign level. The game wouldn’t seem so difficult if everything was explained, but even the hints in the game’s menu don’t cover all aspects of the title.

Those who put up a new building for every new objective will soon run out of room and/or resources as I did. At this point, with buildings everywhere and not the most complete grasp of the game’s mechanics, it felt like there’s no way back. There’s no way of resetting the level, so I did the next best thing and started the game again. I tried the first level again with a different tactic. This time if a building could be moved around to meet the criteria, I avoided putting up new buildings. Once one was upgraded, it was moved to the side so another could be placed there and upgraded. This method doesn’t feel quite like how the game is meant to be played, but it was the difference between not completing the level or completing it with plenty of room and resources left over.

Buildings can be destroyed if they fall into disrepair, or if they’re put in the wrong place. Each building also needs to meet a minimum appeal level to avoid becoming disused. The problem is the building can suddenly find itself in the wrong place when it’s upgraded and the game dramatically changes the appeal criteria for the next upgrade. At this point an intimidating red cross countdown timer appears above the building. If players can’t find a good place for it before the countdown timer fills up, the business closes down.

This is made even more difficult when the timer disappears. Businesses were lost during my playthrough, including a fully upgraded cinema, because the timer prompt either disappeared or never appeared at all. Another source of frustration is the clumsy controls. Selecting the correct building often feels like a matter of luck rather than precision. Using the D-pad can be more specific but this doesn’t always work correctly either. Fast reactions to avoid the countdown timers are often impossible.

While the game does have three save slots, only one save slot is in use at any one time. There is a quicksave option, although that is buried in the menus and saves over the same slot. Instead the game frequently autosaves, often at the worst possible moment and causing stuttering. During level 7, the autosaves caused the game to crash numerous times too. Mistakes are disastrous because of the single save, especially when there’s no option to restart the level.  Even though each level only takes around an hour to complete, starting all over again when everything goes horribly wrong can mean hours of lost progress.

Buildings Have Feelings Too Review – Getting It Right

Buildings Have Feelings Too can initially feel frustrating and difficult, as well as completely unforgiving. Mistakes often end up being incredibly costly and the save system can feel unfair. Despite this, it’s a fun puzzle game once players can fully grasp all of its different aspects and it’s satisfying when everything falls into place.

Buildings Have Feelings Too review code provided by publisher. Reviewed on PS5 (via backwards compatibility). For more information, please read our Review Policy.

The post Buildings Have Feelings Too Review – and Legs, and Arms… (PS4) appeared first on PlayStation LifeStyle.