Skip to content
You are here
Home > PS4 > Call of Duty: Black Ops Cold War and Warzone Season Two Reloaded Roadmap Outlines the Next Few Weeks of the Season 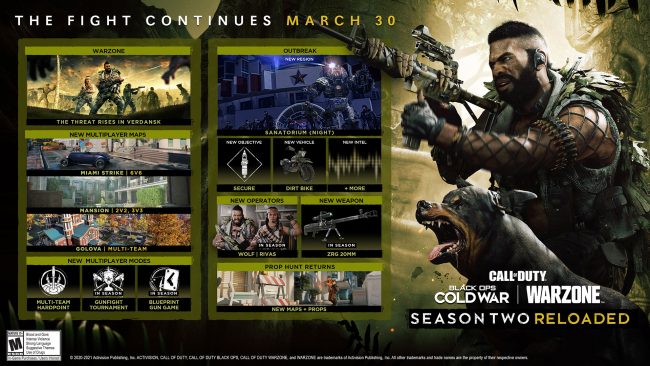 We’ve hit the midpoint of Call of Duty: Black Ops Cold War and Warzone’s Season Two, and with that midpoint comes the major Season Two Reloaded update, bringing a bunch of new maps, modes, and additional surprises for the last few weeks of the Season. Many of the updates were previously announced at the start of Season Two, finally making their way into each game. This update will also reduce the file size of Warzone to help ease the enormous pressure it’s putting on players’ storage.

Most of the content outlined below relates specifically to Black Ops Cold War. While details on what’s coming to Warzone remain thin right now, the prevailing rumor is that the ongoing zombie outbreak in Verdansk is leading to the destruction of the current map to make way for a new one in Season Three.