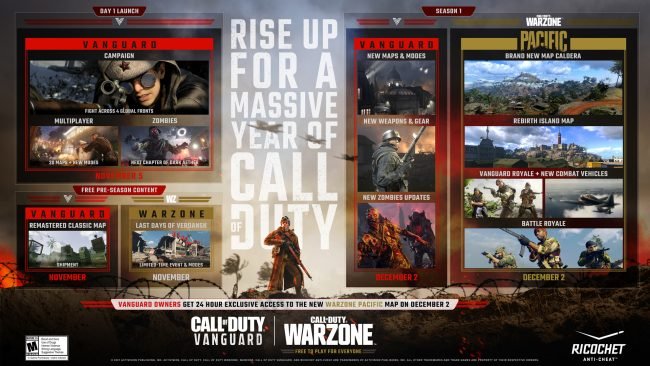 With just about a week to go until Call of Duty: Vanguard’s launch, Sledgehammer gave players a huge info dump about the upcoming title’s progression systems, launch roadmap, changes from the beta, and more. Additionally, they revealed that Warzone: Pacific will launch on December 2, the same date that Season One officially goes live for Vanguard.

Sledgehammer has already detailed the storage requirements and preload dates for Vanguard, but this roadmap outlines what players can expect during the game’s first month.

At launch, players will have access to Call of Duty: Vanguard’s campaign, Zombies, and Multiplayer experiences. Treyarch returns for Zombies to develop Der Anfang, a prequel to Black Ops Cold War’s Dark Aether storyline. Zombies mode also combines lessons learned from round based maps and the more freeform objectives of Outbreak. The campaign will introduce players to the story of Task Force One before they go on to play as these Operators in Multiplayer.

At launch, Vanguard will have the following modes in both core and hardcore playlists:

Sledgehammer promises additional modes including “two newer ones that recently became a competitive standard and a small-team tactical mainstay respectively,” are coming following launch at some point. Core playlists can be played on 16 maps spanning five continents.

Via Quick Play, players can target the exact pacing of gameplay they want through the Combat Pacing feature.

Champion Hill rounds out the game modes with the multi-arena Champion Hill, which mixes survival like gameplay with small scale tournament battles on unique maps built just for this mode. Private matches will also be supported at launch.

Vanguard will launch will 12 new Operators, including the four members of Task Force One that make up the campaign. Each member of the team leads another Task Force with two additional members. Bolded members are core Task Force One Operators:

Operators will have additional skins and customization options at launch, including the new “quips” system that shows off more of the Operator’s personality in combat.

Further, each Operator will no have progression as well. ” All 12 Operators at launch and others to come — can be leveled up to unlock new Skins, including special Gold attire, Weapon XP for specific weapons, and more. Use their Favorite Weapon to earn bonus Weapon and Operator XP.”

Launch brings more than three dozen weapons, with a new Gunsmith that allows up to 10 attachments and customization points on most weapons. They’ve previously detailed how weapon attachments will impact DualSense adaptive trigger response as well.

There are also three perk slots with six perks each for 18 total perks to choose from, and more than 40 weapon perks vie proficiencies and kits. Finally, more than a dozen Killstreaks round out the package. Yes, Vanguard is returning to Killstreaks rather than continuing Black Ops Cold War’s Scorestreak system.

Progression will follow Black Ops Cold War, with 55 base ranks to unlock weapons and loadout items, followed by the Seasonal Prestige System that will return with Season One when it launches on December 2.

The server side systems of RICOCHET Anti-Cheat will be active in Vanguard multiplayer at launch, with the kernel-level driver to launch with Warzone: Pacific on December 2.

Road to Season One

Even if Season One doesn’t launch until December 2, that doesn’t mean November will be dull. The road to Season One is filled with events.

A Vanguard version of the classic tiny Call of Duty map Shipment will be added to the game in mid-November, while the Secrets of the Pacific limited-time event will bring challenges to both Warzone and Vanguard as they prepare to end Verdansk and bring the new Pacific map to Warzone.

To celebrate and send off Verdansk, beginning November 18th, “Operation: Flashback” will be a limited-time mode “featuring plenty of surprises that cover Verdansk’s action-packed history.” Players can earn a unique emblem for participating and an animated emblem if they claim victory in the event.

Secrets of the Pacific is a limited-time event starting November 24th that grants new information about Warzone: Pacific prior to its launch. More information is coming on this Beenox-developed event in mid-November.

And finally, starting November 30, the destruction of Verdansk begins…

Call of Duty Vanguard and Warzone Season One Intel

We still have November to get through, but here are some teasers for what’s coming in Season One on December 2.

Warzone: Pacific’s new map is called Caldera. “Caldera’s only true comparison to Verdansk is its scale. This brand-new map, built on learnings from the community, is launching with Season One. Lush forests and rocky crags. White sand beaches and mysterious ruins. And a dormant volcano that towers over the 200-plus points of interest.” This isn’t a simple ’80s makeover. This is a whole new map.

Notably, Warzone will also get a name change to Warzone Pacific. They also mention cross-gen support, which seems to indicate Warzone Pacific getting a native PS5/Xbox Series X version, and potentially breaking free of the Modern Warfare application.

While Warzone Pacific will remain free-to-play, Vanguard owners will get 24 hours of exclusive early access to the new map. They’ve also teased dogfighting in planes, AA guns to take them down, as well as confirming that all of your existing cosmetics and earned items from Modern Warfare and Black Ops Cold War will carry over.

To help rein in some of the weaponry, new Vanguard modes at launch will limit loadouts to Vanguard weaponry, which should streamline the meta in place. However, your older Operators can be used in the Vanguard playlists, so if you want to be Billy the Puppet or Bruce Willis in Warzone Pacific, go for it.

And that’s not all! In Vanguard, Season One will herald the arrival of three new Multiplayer maps, three all-new Operators, additional new Zombies content, new weapons, and more. It will also bring the Vanguard Warzone Pacific Battle Pass for Season One.

More intel is available on the Call of Duty blog if you want additional specifics. For now, we have mere days until the launch of Call of Duty Vanguard on November 5th, and then the road to Season One begins.

Ubisoft Delays The Division Heartland and Prince of Persia: The Sands of Time Remake Into the Next Financial Year