Call of Duty: Vanguard‘s Season One will begin in just a couple of days, meaning now is the perfect time to introduce players to the new content that’ll be arriving for free during the next few weeks. There’ll be two new multiplayer maps, two perks, incendiary grenades and plenty of Zombies content arriving on day one in COD Vanguard Season One, while new operators and new game modes will follow later on in the season.

Technically one of the “new” maps isn’t actually all that new. Radar is a reimagined version of Modern Warfare 3‘s Dome. Now a small radar station in the Pacific, it is especially suited to close quarters combat. Meanwhile, Paradise is a weapons testing site located in the Pacific Ocean. Used by Operators for joint exercises, the medium-sized three-lane-style map includes an underground tunnel and pools of toxic waste that are a result of the hazardous weapons testing. 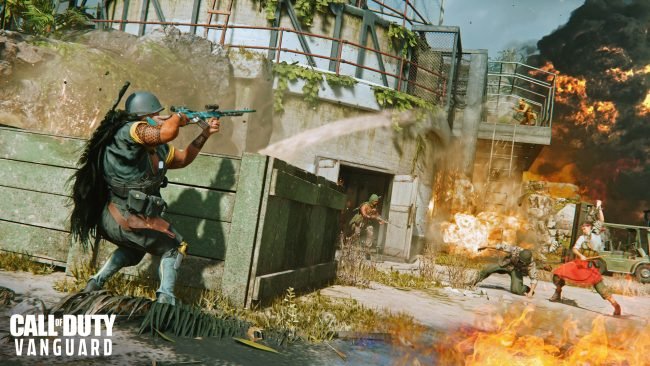 The popular Control game mode will return. Two teams take turns at defending and attacking two Control points across the map. Attackers have to capture the zones within a time limit while defenders have to stop them doing that. Both teams have a limited number of respawns, and either team will fail the round if they run out of these. Later on in the season, another “respawn-heavy mode” will launch during the Festive Fervor seasonal event, but the only hint given was that “any veteran since the Modern Warfare 3 days should be prepared to get in the zone for it”.

All players will be able to make use of the single-edged Japanese Katana at launch by unlocking it through in-game challenges or through a store bundle, while the Welgun is a prototype SMG to be introduced later on in the season in the same manner.

A new season brings along a brand new Battle Pass with 100 tiers of rewards for players to unlock. The free path will include two perks, new equipment, COD points, weapon blueprints, and items specifically aimed at clans. When unlocked at tier 39, Incendiary grenades will create an area of white fog that causes damage across a large radius. The first perk, Serpentine, is unlocked at tier 21 and reduces damage from ballistics and explosives while sprinting. Intuition is unlocked at tier 44 and allows players vision to pulse when an enemy is nearby, even through walls.

PlayStation Plus members will once again get an exclusive Combat Pack. This includes “an Epic Operator Skin for Lucas Riggs, the Legendary “Blue Glitz” Shotgun Weapon Blueprint featuring 10 attachments, the Legendary “Mermaid Scale” Melee Weapon Blueprint, an Epic Emblem, Watch, Sticker, and Calling Card, and a 60-minute Double XP Token”. This can be accessed from the PlayStation Store once the season launches.

Of course, Call of Duty: Warzone won’t be missing out either. The brand new Caldera map will be launching on December 9 for all players, although Vanguard owners will get 24 hours early access from 9 AM PT on December 8. The map will have 15 points of interest and will come with two playlists at launch. The new launch trailer gives a glimpse of the chaos awaiting players on Caldera.

Those who pick up the premium Battle Pass will unlock a new Operator immediately. Francis “Kai” Lanakila is the first of the S.O.T.F. Trident Operators to be introduced and he’ll be unlocked at tier 0 with his default “Kingdom” Operator Skin. He comes equipped with the new Cooper Carbine short-range Assault Rifle that can be unlocked at tier 15. His progression path will include XP bonuses, two new Skins, and a “Kalua” Pork Weapon Charm.

Other Tier 0 rewards include the “Alleyway” Arthur Kingsley Skin, the customary 10% XP boost throughout the season, and a 45 minute double Weapon XP token. Meanwhile, those who pick up the Battle Pass Bundle will be able to skip straight to tier 20 and will get immediate access to Polina’s Legendary “Battleprepped” Operator Skin as well as all of the other rewards from those tiers.

Before the end of the year, the second S.O.T.F. Trident Operator will arrive. Lewis Howard is the USA’s deadliest sniper whose favorite weapon is the semi-automatic Gorenko Anti-Tank Rifle, also included in the Battle Pass at tier 31. In 2022, Isabella Rosario Dulnuan Reyes will make an appearance. Details on the close quarters specialist are scarce right now, but both of these operators will have their own featured bundles.

Those who have all three Trident operators at level 20 will get special gold-trimmed outfits. Those who have also maxed out all 12 operators from the main game will get Diamond Operator Skins. Meanwhile, the third weapon to be included in the Battle Pass is the Sawtooth melee weapon, unlocked at tier 37. A club with shark’s teeth sewn around it edge, players can use it to bash or slice their opponents. 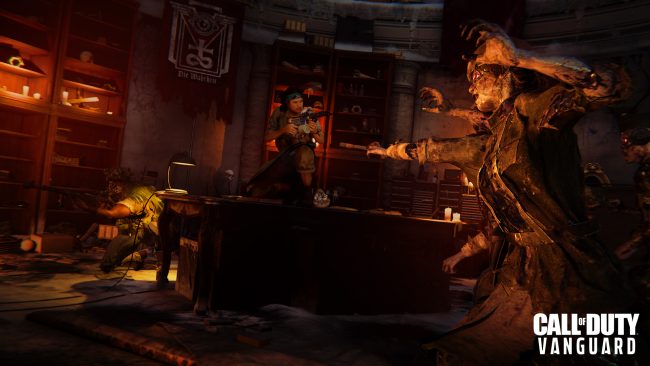 Treyarch has also been extremely busy creating new content for Season 1. Players will be faced with a new Purge objective on Der Anfang where they have to eliminate aethereal worms known as Augmentors. The catch is they can only be defeated by acquiring powerful Control Runes and they’ll spawn waves of enemies to stop players from doing that. Those who are successful will get a Sacrificial Heart to exchange at the Altar of Covenants.

There will be five new Covenants that include 14 upgrades between them:

All of the weapons that can be unlocked through the multiplayer Battle Pass can also be used in Zombies. Players can add them to their loadout or find them in the mystery box later in the season. At season launch, Treyarch is also adding launchers into the Zombies loadouts and mystery box. New career challenges will offer XP bonuses and calling cards too.

– Von List’s Office. Few know what Von List is hiding in his personal quarters, but it may offer clues as to Kortifex’s plans. Dark secrets may also be waiting beyond a mysterious new portal…

– Support Killstreaks. The devastating Warmachine and Deathmachine will be ready to help you fight the rotting masses, so long as you have the Salvage to spare at the Crafting Table (or get lucky at the Mystery Box).

More information on Festive Fervor and other upcoming content has been promised for the future. In the meantime, if you’re interested in the gameplay improvements and bug fixes the studios will be making in the run up to Season 1, you can check out the patch notes on the Sledgehammer Games Blog.