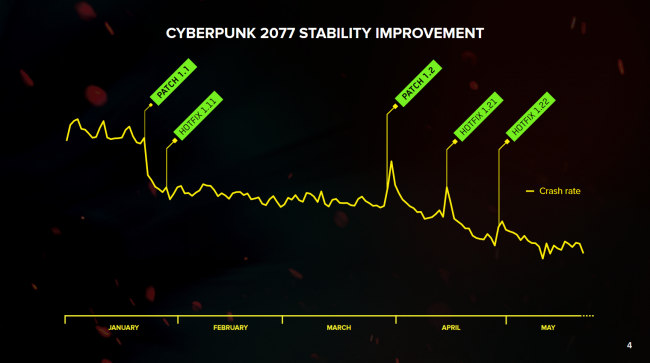 CD Projekt SA reported that their profits fell by nearly 65% this quarter, well below their own expectations and those of analysts. As reported by Reuters, the main reason believed to be behind this is the continued absence of Cyberpunk 2077 from the PlayStation Store following its removal over five months ago.

The company’s net profits for the first quarter of this financial year dropped by 64.7% to 32.5 million zlotys. Analysts had expected this value to be 80 million zlotys instead. The company’s shares have lost over 60% of their value too. One of the main reasons for the fall is that the publisher is still waiting for their game to appear back on the PlayStation Store, something they have said is entirely Sony’s decision. The game was removed from the PS Store in the middle of December 2020 following confusion and disagreements over issuing refunds to disappointed players. The company now hopes its friendly relations with Sony will speed that decision along.

CFO Piotr Nielubowicz told investores that 60% of their sales come from Cyberpunk 2077, although he didn’t give specific figures. A company official later confirmed that while the game had sold nearly 14 million copies, the PlayStation Store issue is still having quite an impact. “The general situation as long as we are not back on the Sony store has not changed. One of the leading marketplaces for us is not available and we generate most of the sales on the PC/digital channels”.

Another reason for the drop in net profits is the rising cost of the game’s development while the team tries to fix its myriad of issues. “Multiple patches and updates” will continue to be released throughout 2021 and beyond the start of next year. A rather bizarre slide presented to investors showed a progress chart of how the game’s stability has improved since launch through all of the major patches and hotfixes. While the chart shows a clear drop in crash rate, tellingly the Y axis isn’t labelled and we have absolutely no idea what values those numbers actually represent.

To improve their outlook for the future, CD Projekt is aiming to build out their two major franchises: The Witcher and Cyberpunk. The more imminent future for Cyberpunk includes the start of the free DLC program as well as the release of the delayed PS5/Xbox Series X/S versions of the game during the latter half of the financial year. The Witcher will get a new mobile title called The Witcher: Monster Slayer, while The Witcher 3: Wild Hunt will get a new-gen version. The company is also looking for merger and acquisition opportunities to raise more capital too.

‘Our Story is Political,’ Ubisoft Embraces the Political Nuances of Far Cry 6

Overwatch 2 Update Patch Notes List Everything New for Season One