Clid the Snail. Whatever you thought this game was about, I bet you were wrong. If you said “isometric shooter featuring an eccentric anthropomorphic snail named Clid who can wield guns and wants to take down the slug plague so he can get back to drinking,” then I’d say you either cheated and have read about it before or you’re a developer or PR person checking out my preview (hi!). So now you know what Clid the Snail is, but let me tell you, you can’t really prepare yourself for the gritty realism of a gun-toting arthropod, so please, enjoy this closer look at the key art of Clid before I continue. 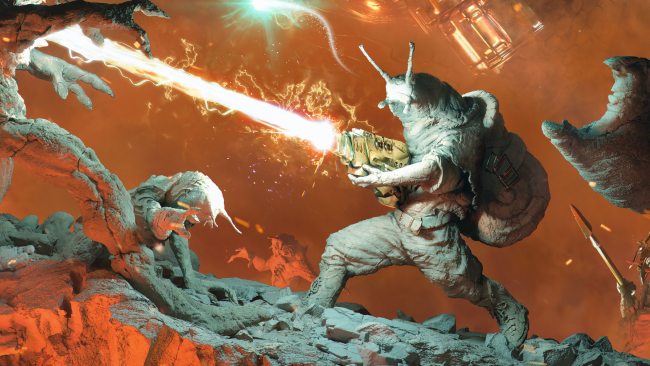 Unlike other top-down shooters that one might describe as “bullet hell,” developer Weird Beluga wanted to create a new spin on the genre. Clid the Snail is a narrative-driven adventure with more methodical and challenging combat, fleshed out with exploration in a miniature world and a variety of puzzles. And yes, this is a miniature world. Though Clid may have humanoid arms and legs, he’s still the size of an actual snail, and exploration through the world will reveal familiar objects—including the skull of a long-deceased human—that properly size Clid and friends in this post-apocalyptic environment. Humans are gone, and animals have since adapted human objects and technology for a variety of purposes.

Clid’s story is a “dark fable” that centers on themes of being an outcast. He has a companion—Belu the firefly—but like the ultra-annoying Navi, Clid isn’t exactly a fan. He does, however, meet additional friends as part of a group called Alastor, made up of various outcasts who have come together. One of these friends is Haelsy, a mute bat who uses headphones to speak, and can sometimes plug into things using the 3.5mm headphone jack she has for a tail.

Welcome to Alastor, home of misfits and outcasts.

The Alastor base acts as the central area for operations against the slug plague that’s ravaging the land. You’ll return here between missions and interact with a variety of animals that have joined this group of outcasts (and drink Bamboo Juice). Out in the harsh world, however, things aren’t quite so relaxing and fun.

Weird Beluga was inspired by classic Housemarque shooter games, though don’t expect that arcadey style. This is a much more methodical shooter, and not everything is about shooting. The development team says that puzzles and exploration helps with pacing and also allows players to find gear to upgrade Clid (who, if you’ve forgotten, is an anthropomorphic gun-toting snail, a detail that is still bizarre and weirdly wonderful to me).

Elements like this ring and the candles help you realize just how small Clid is.

Players will traverse a variety of environments and fight a number of different types of enemies, like scorpions and moles. We also saw a boss battle—the game’s first—against Ska the pyromaniac rat. Clid was mad that he burned down the bar (Ska also killed all the grasshoppers in the citadel, but that’s not as important as the whole burning down the bar thing). Ska was a bit of an outcasts outcast, originally a member of the Alastor group before he went rogue.

Across an adventure of around 8-10 hours, players will get to use eight weapons, three grenades, and change Clid’s shell into one of four special powerups, including the Firestorm, which fires a volley of missiles. Another shell creates a bubble shield and can make Clid invisible. As for the weapons, there’s a lot of variety in the eight, including the Plasma Disc Thrower that can send out and call back three discs, and the Acid Grenade Launcher that can… launch acid grenades, what else? 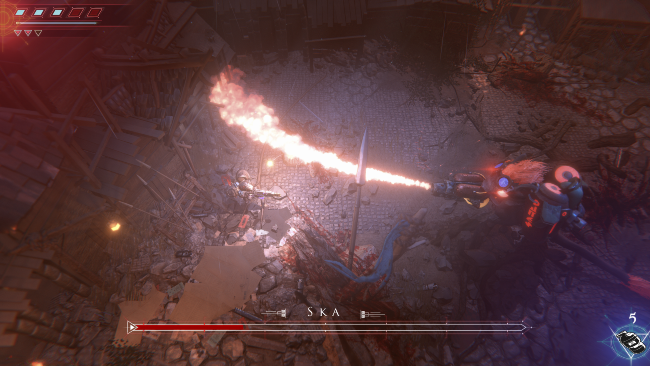 Don’t burn down the bar. Clid doesn’t like it when you burn down bars.

And that’s all just the tip of the iceberg in this crazy world. The war between Alastor and the slugs is likened to a battle between sci-fi and fantasy. While Clid and Alastor use a lot of technology, the slugs, on the other hand, rely on fantasy combat elements like swords and magic. This dynamic lends a lot of interesting elements to the combat that help in that interesting “methodical” gameplay, rather than just filling the screen with projectiles. There’s a lot to consider with your own loadout and what the enemies are using against you.

Clid the Snail is a timed PlayStation-exclusive thanks to the team at Weird Beluga winning the PlayStation Talents award in 2020, which was essentially their ticket to making the game a reality. Clid the Snail doesn’t yet have a firm release date, but Weird Beluga says it’s coming “summer 2021,” which means we should see it pretty soon, barring any delays.

The post Clid the Snail Preview – So a Snail and a Gun Walk into a Post-Apocalyptic Bar… appeared first on PlayStation LifeStyle.