I’ve been riding an RPG high these past couple of months. After spending a lot of time running around a futuristic world with the Scarlet Nexus crew, tackling another story in which time plays such a huge factor set off my Spidey senses. PSLS offered me the Cris Tales review opportunity. Promos promised me a stylish adventure. Never one to turn down the chance to cover a game on my wish list, I weathered my way through thunderstorm-induced power outages to see Crisbell’s story play out. 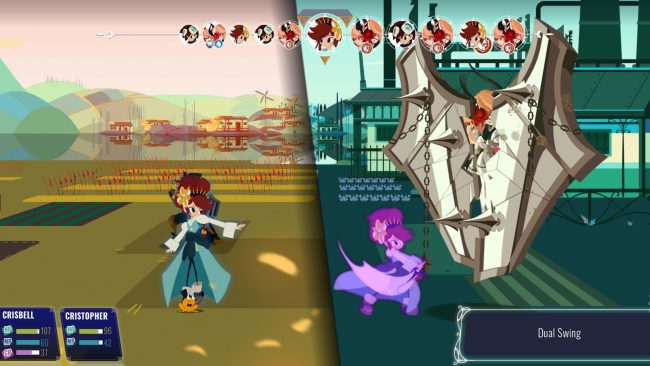 Crisbell’s tale starts like many others. She’s an orphan, growing up with other orphans at the local church. Yet somehow there’s a stained glass window featuring a girl virtually identical to her. Not suspicious in the least. It’s a touch tropey; she follows a thieving frog in a top hat to learn she is a Time Mage with the power see into the past and future. She needs to master her abilities in order to stop the Time Empress from claiming the world as her own. Crisbell is joined by a wizard to tutor her and a warrior just as eager to put an end to the war as she is. Others can be recruited along the way, allowing you to rotate the lineup as you see fit.

Once you set aside some of the more obvious plot direction and start exploring Crisbell’s world things start coming together. Particularly when you see how completed (or unfinished) sidequests and Crisbell’s main story choices affect the future of each town she visits. Here’s the thing. I own bookshelves full of stories featuring young orphans destined to save the world. Crisbell embodies all of the goodness we want our heroines to portray. That’s great, but a truly fantastic main character has flaws. Our only option to see potential flaws lie in not making the best decision at the end of each chapter. And that only shows up if players don’t complete every sidequest before tackling the boss or we flat out choose poorly. Then there’s the banter between Willhelm and Cristopher which gets tiresome after a while. It’s Willhelm repeatedly belittling Cristopher and giving him sarcastic praise when he does something “right” in the wizard’s eyes. This gets exhausting quickly, to the point where sometimes I just wanted to button mash to skip dialogue. 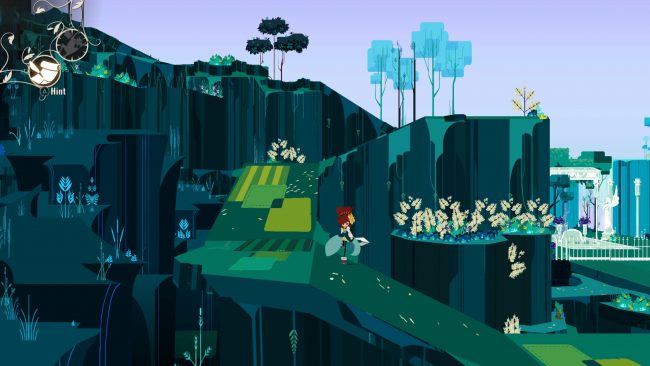 In battle, Crisbell can use her special crystals to turn back time on the left side or move it forward on the right. This new mechanic allows the player to try new things. Plant a poisonous seed in the past then bring time back to the present to do massive poison damage. Or toss water on shielded enemies in the present and send them to the future where rust eats away at their defenses. Seeing what sorts of combinations I could come up with using my characters’ skills and the time crystals has been by far my favorite thing to do in the game.

Virtually every quest in the game will have you travel through time at one point or another. Whenever you are inside a town or building the screen default splits into three views: past on the left, present in the center spotlight, and future on the right. Outside of battle, Crisbell can send frog friend Matias into the past or future where he can search for clues, interact with people, and open chests.  There are other points of interest where Crisbell can repair or destroy items via time. It’s a great way to reach new areas or find items certain people might not want found. 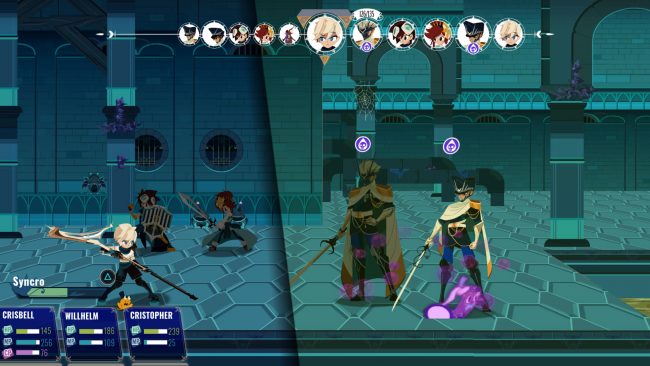 Aside from Crisbell’s ability to shift time, Cris Tales plays like most every other turn based RPG. Crisbell slashes through enemies while having a handful of decent support skills in her pocket. Cristopher’s has some powerful elemental skills but can do some decent smash damage with his two piece shield. Willhelm is the all-rounder with his wide spectrum of magical root vegetables, etc. And there are opportunities to expand the party as you chase after the Empress with other familiar class types. It’s your fairly typical assortment that can be mixed and matched to suit your particular play style.

There are definitely areas that can be improved. Cris Tales has some astonishingly simple spelling and grammatical errors that I honestly don’t know how they slipped past the editing team. For instance, the infrequent spelling of Cristopher’s name with a second “h” or lower case letters where there should be capitalization. And the world map could be much more user friendly. An overworld map that shows locations with their names would have saved me an hour or so early on. Or just having location names pop up on the map when I was close enough to hit X to enter. Easy fixes that would make this just a smidge more accessible and a touch less frustrating.

Cris Tales‘ number one selling point is its use of time manipulation as both a plot device and battle mechanic. It’s what makes the entire experience. It’s a solid mid-range game, great for teens and adults looking for a fairly breezy thirty-ish hour adventure. However, there are better games out there that you should experience first, especially if you have to be more selective with your cash.

Daily Reaction: Activision Blizzard’s Boilerplate Responses to the Discrimination Lawsuit are Promises it Can’t (or Won’t) Deliver On

How Does a Slower SSD in the PS5 SSD Expansion Slot Perform? Turns Out, Pretty Well (Right Now)