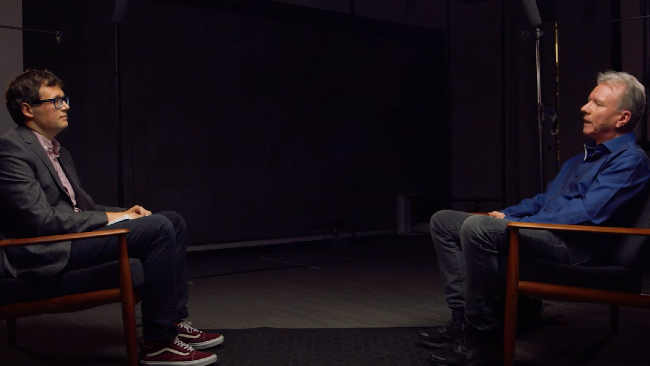 Jim Ryan catches a lot of flack from PlayStation fans. Ryan is a businessman first and foremost—he started off at PlayStation in 1994 setting up offices and logistics. His role at PlayStation has always been business focused, in the background until he was thrust into the limelight leading PlayStation Europe. In 2019 he then took on the top spot at the company, becoming CEO and President of PlayStation. Yet compared to other notable public-facing PlayStation figureheads—Shawn Layden, Adam Boyes, and Shuhei Yoshida, among others—Ryan has not had the same kind of charisma, public presence, or connection with fans.

Indeed, I myself have written extensively about Ryan’s perceived inability to be that relatable mouthpiece for the company. He’s very corporate, feeling less like the guy on the controller next to you and more like the one counting the money. Given his background in logistics and finance, this makes a lot of sense, and whether you like him or not, there’s no arguing that his tenure with the company has elevated PlayStation to levels they would have never achieved otherwise. Ryan’s certainly made a few “foot-in-mouth” comments that have stirred the pot over the years, but it comes from a place of public speaking not being his forte.

Knowing Jim Ryan’s value to PlayStation as a whole and holding that up against the disapproval he nets from the community, I was delighted to see something of a softer, less “businessy” side of Jim Ryan come out during his Fireside Chat during GI Live. During the 21-minute talk with Head of GamesIndustry.biz Chris Dring, Jim Ryan is able to relax and talk more naturally. While he’s still inherently a businessman, we get to see a side of Ryan that speaks on a deeper level to his 27 years with PlayStation, and his passion and drive for the brand over the years. Dring and Ryan have a good rapport, naturally able to hold conversation that feels casual.

While the talk didn’t drop any bombshell announcements about the future of PlayStation, it did allow us to get a more wholistic picture of PlayStation over the years, and Ryan’s part in it. Ryan began his tenure at the company in 1994 where he was tasked with establishing PlayStation’s European presence. This meant leasing offices, hiring people, and setting up systems, processes, and distribution that would come to define PlayStation for years. In one case, because this was all being done prior to the original PlayStation going on sale, they had no cash for office furniture and had to get a bunch of desks from Ikea. “Those desks served us well for a number of years, actually. I was quite proud of those desks. Ikea. I recommend it to anybody,” Ryan said, smiling and laughing.

Throughout the chat, Ryan still exudes a whip-smart business savvy, but he does it in a less scripted way that helps you to understand where he’s coming from; his own history with the brand, where he’s at currently, and where hopes things will go. Ryan wants PlayStation games to be more ubiquitous, as ubiquitous as gaming overall is becoming each and every year. Currently rate limited by the number of PlayStation consoles on the market, Ryan expresses the hope that PlayStation IP can find the more limitless audiences of media like movies and music, which are far less restricted by a specific platform.

However, he also freely talks about the challenges PlayStation has had, notably mentioning how the company had “struggled our way through PS3,” admitting that the PS3 console era was beset with “well-documented challenges.” He then highlights both the reveal of the PS4 at E3 2013 and the uniquely successful pandemic-burdened PS5 launch as two highlights within his time at PlayStation that really showed a lot of promise for the brand.

A Shy and Introverted Jim Ryan

Asked about his transition from a behind the scenes role to becoming more of a company figurehead—first with PlayStation Europe and then as CEO and President of the whole brand—Ryan noted that he’s “naturally quite a shy person” and generally introverted. “Public speaking is something that has never come naturally to me.” However, Ryan enjoys forging relationships within the industry—such as the times he’s sat down to talk with Dring—and says it’s “quite a fun part of the job now.” He goes on to talk about some of his nervous moments before hopping on stage, while also pointing out how digital events in the pandemic have really changed that public speaking side of things too.

During the interview, Ryan was asked what makes PlayStation PlayStation? He focuses on three core pillars here, the first of which is the games. Second he mentions the growing sense of community that PlayStation players participate in and enjoy, and finally he settles on the PlayStation brand. “PlayStation has always been cool,” he says. He remarks on now being in the formative months of PS5, where everyone wants to be associated with the console and the brand. Ryan believes and hopes that PS5 will be the most successful and most beloved PlayStation console to date.

The GI Live fireside chat made it abundantly clear that Jim Ryan is a champion for PlayStation, even if he doesn’t quite display it on the same level as the extroverted faces of PlayStation that have come before. His dedication to the brand goes back to before the first PlayStation even launched, and continues to resonate to this day. While Ryan is certainly still a rather business-minded individual, we got to see a side of him here that was a bit more relatable and passionate, a bit less corporate. Ryan isn’t just running the books and sitting on conference calls. He enjoys games, and enjoys giving those around him the creative freedom and power to make great games, first and foremost. And because of how great he feels those games are, he wants more people to have access to them.

I still miss the days of Layden, Shu, and Boyes. I wish we still saw the likes of Vita champion Gio Corsi on stage. I want more silly quick videos and candid remarks and to generally feel the presence of the people behind the PlayStation brand. I want to see more of the PlayStation team, hear more about all of their interests, and be assured that this is a passionate company full of people who love games as much as I do. But I was really happy to see Jim Ryan humanized and given the opportunity to speak very candidly about his own position with the PlayStation brand; past, present, and future. It’s reassuring to know that, even though he may be a bit more introverted with regards to public comments, Ryan has a deep level of care for PlayStation that carries over into how he handles running things.