0
Blizzard’s mobile entry into the venerable Diablo series, Diablo Immortal, has just entered closed alpha. The test is limited to Australia only, will run for at least a month, and sees a host of new additions above and beyond what we saw in the well-received technical alpha at the start of the year. The Crusader, for instance, has been added to the four previously playable classes and the level cap has been raised to 55 (just shy of the max level of 60). Alongside the ability to reach higher levels are two new zones to put those character to the test: Mount Zavain, home of the monks of the Sanctified Earth Monastery, and Frozen Tundra, a snowy wasteland inhabited by scattered Barbarian tribes. The latter also houses a new dungeon: The Cavern of Echoes.

A number of new systems also debut, such as the Helliquary, which unlocks between levels 41–45, and allows players to locate and defeat boss demons in order to not only power up their characters, but also to benchmark their power. The closed alpha will have one boss initially, with another to be added later, while the eventual live game will see a boss added each month. 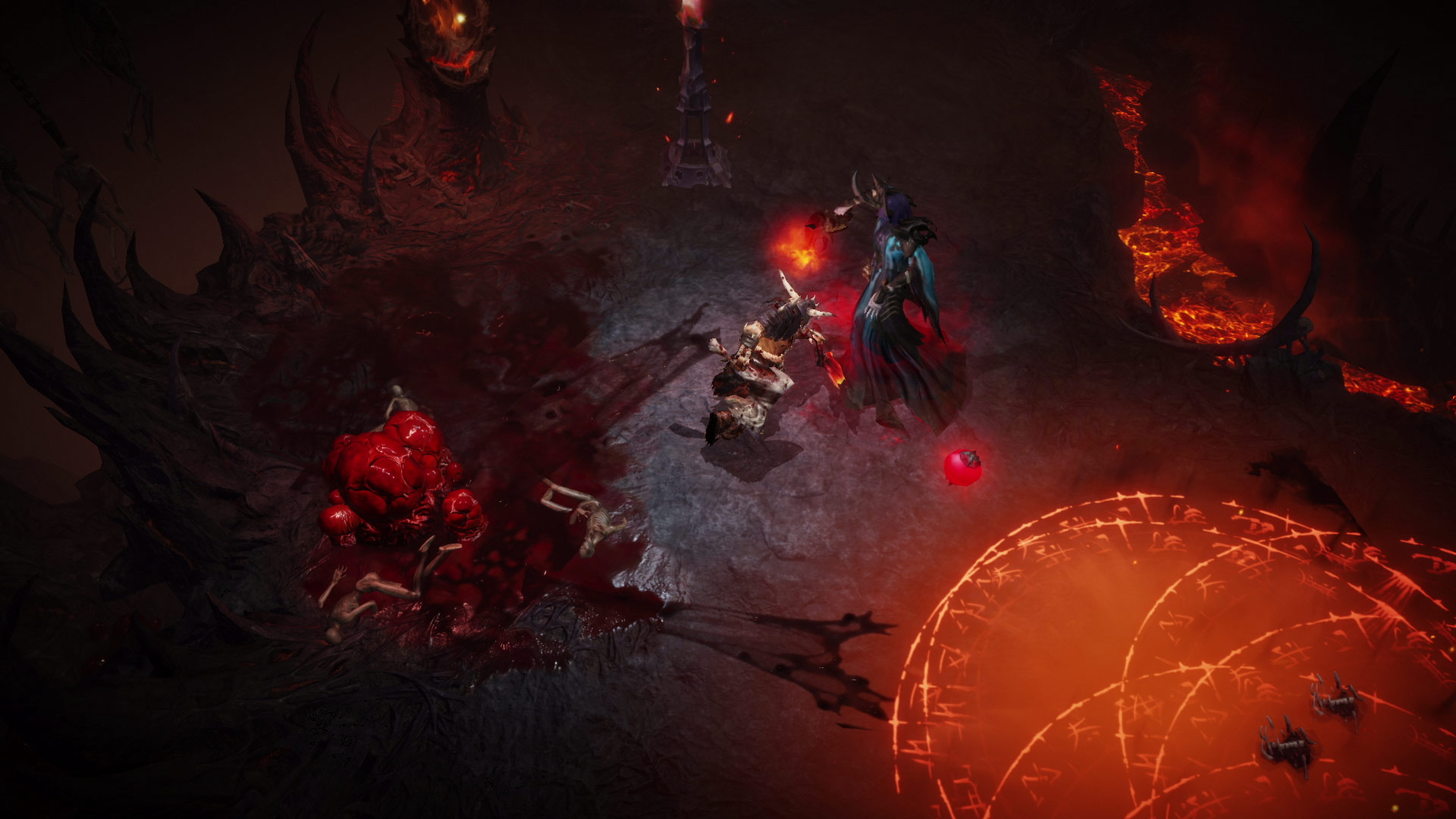 Duking it out against a Helliquary boss.

By far the biggest new addition, however, is the Cycle of Strife, a server-wide faction-based PVP endgame system. Anyone can participate in it, and at its center is a battle between the Immortals and the Shadows. Who are they? Principal game designer Scott Shicoff outlined the lore behind it in a recent media briefing.

“A long time ago,” he says, “there was a powerful individual called Daedessa the Builder… she wanted to protect Sanctuary from demonic invasion but she wasn’t a fighter. She was, however, a master crafter, and she created a powerful artifact called the Eternal Crown. She gave it to her son Kion… and charged him with forming a group whose sole purpose would be the protection of Sanctuary from the Burning Hells. Kion took this powerful artifact and created a guardian group which he called the Immortals.

“Daedessa knew that power, especially that kind of power, can lead to complacency and corruption for even the best or most well-intentioned individuals like her son. So she gave her daughter Akeba a secret heavy burden. It would be Akeba’s job to make sure that the Immortals would never falter or waver. That they were always worthy and capable of defending Sanctuary, as they were charged. So working in secret, Akeba found those brave enough to help her constantly test and challenge the Immortals. They would look for cracks and weaknesses and they would do everything they could to make sure the elite defenders of Sanctuary were always up to the task. She called this group the Shadows.

“And should the Shadows ever prove stronger and more capable, they would overthrow the current reign and take up the Eternal Crown as the new Immortals. Which, of course, they eventually did, with Akeba becoming the next Immortal. But Akeba could never get too comfortable because she knew that as she rose up, so too would new Shadows to make sure she was always worthy of her station. And thus the Cycle of Strife was born.”

That then, is the Cycle of Strife, and it boils down to a seasonal tug of war between the Immortals and the Shadows. That battle, however, will be a long way from symmetrical. There will only ever be one group of Immortals on a server, with up to 500 members. There’s no limit to how many Shadows can be active, on the other hand, and they will all be vying to displace the current group of Immortals.[poilib element=”quoteBox” parameters=”excerpt=The%20Cycle%20of%20Strife%20boils%20down%20to%20a%20seasonal%20tug%20of%20war%20between%20the%20Immortals%20and%20the%20Shadows”]

How does that happen? Well, Shadows players can form and join Dark Houses, which are basically like sub-guilds. The Dark Houses are all effectively in competition with each other, fighting to be at the top of the sub-guild rankings. The more each Dark House’s members are actively engaged with Shadows activities, the higher their house will be in the rankings.

This all comes to a head when the Shadows reach a point in their overall progression that triggers an event called the Rite of Exile. This is where the Shadows and Immortals fight it out to see if the Immortals are still worthy of holding onto their vaunted position. The Rite of Exile sees the top ten Dark Houses sending their eight strongest members to fight the best the Immortals have to offer. This kicks off ten separate simultaneous 8v8 battles and if at least half of these are won by the Immortals the status quo remains. If it least half are won by Shadows fighters, the Dark House at the top of the Shadows ranking will become the new Immortals and a new cycle begins. 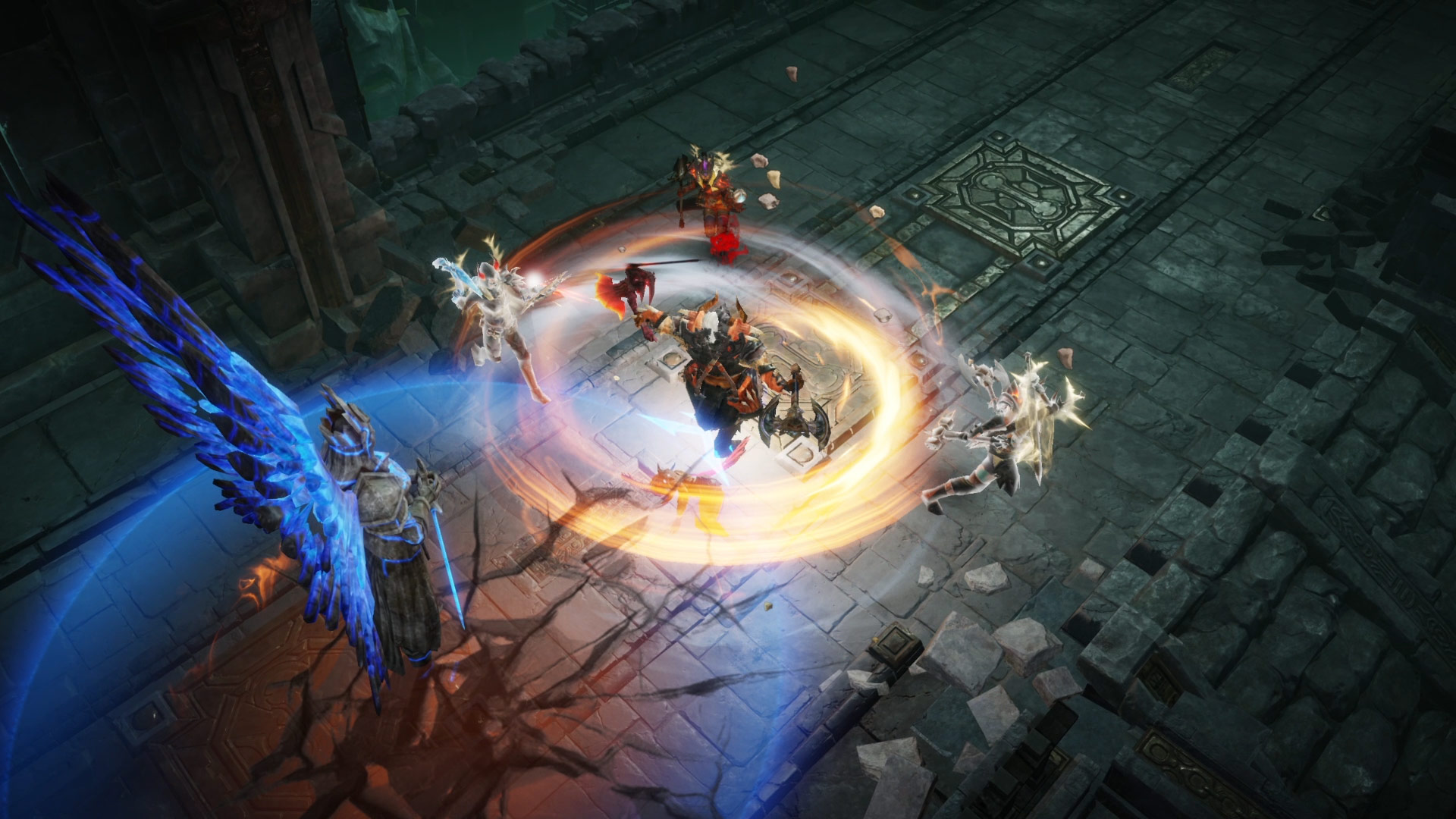 Shadows fighting to prove their worth in the Rite of Exile.

It’s a pretty interesting sounding system that rewards both PVE engagement and PVP skill, and is a focal point for this test. Indeed, the prospective length of the alpha is all about testing the Cycle of Strife. “The last technical alpha,” says game director Wyatt Cheng, “was three weeks. We are looking for this closed alpha to be quite a bit longer. We want it to be at least a month. We want to see a group of players become the Immortals. And we would love to see those Immortals get overthrown by a Dark House of Shadows. So, since each overthrow cycle probably takes about a month, we’ll see how long that takes. Of course, this is a very early look at the feature. And so, if the tuning is off, then it could disrupt some of our master plans. That’s one of the things that we’ll be testing is how long does it actually take versus our theoretical paper design?”

The Immortals/Shadows system is also entirely opt-in. Players can choose not to take part and simply be designated as Adventurers. It’s also worth pointing out that when a new cycle starts, everyone aside from the Shadows that become the new Immortals will be reset back to Adventurers and can thus choose whether to join the Shadows and align with a Dark House all over again.

There will be a variety of activities for both Immortals and Shadows to really ensure each faction feels distinct. One example for the Immortals is called Kion’s Ordeal, which is a 48 person raid and sees four groups of 12 players each simultaneously fighting four bosses. “You want to try and kill these bosses as close to the same time as you can,” explains Scott Shicoff, “because as each one dies, the other gets stronger.” Beating Kion’s Ordeal helps keep the Immortals ahead of the Shadows and gives a faction-wide buff called the Blessing of Daedessa which increases rewards for Elder Rift runs for every non-Shadows player on the server. Most interestingly of all, riches and equipment from Elder Rift runs those players complete contribute to an Immortals vault, which gets handed out to Immortals at the end of the week… unless the Shadows can stop it.

This ties into a Shadows activity called Raid the Vault. This lets a team of four Shadows attempt to steal from the vault. It starts out as PVE against NPC enemy guardians in the vault, but if the Immortals find out someone is attempting to breach their defenses, they can send players in to defend it and the activity transitions to PVP. If the Shadows are defeated, they leave with nothing. If they defeat the Immortals they have a grace period to continue raiding the vault. 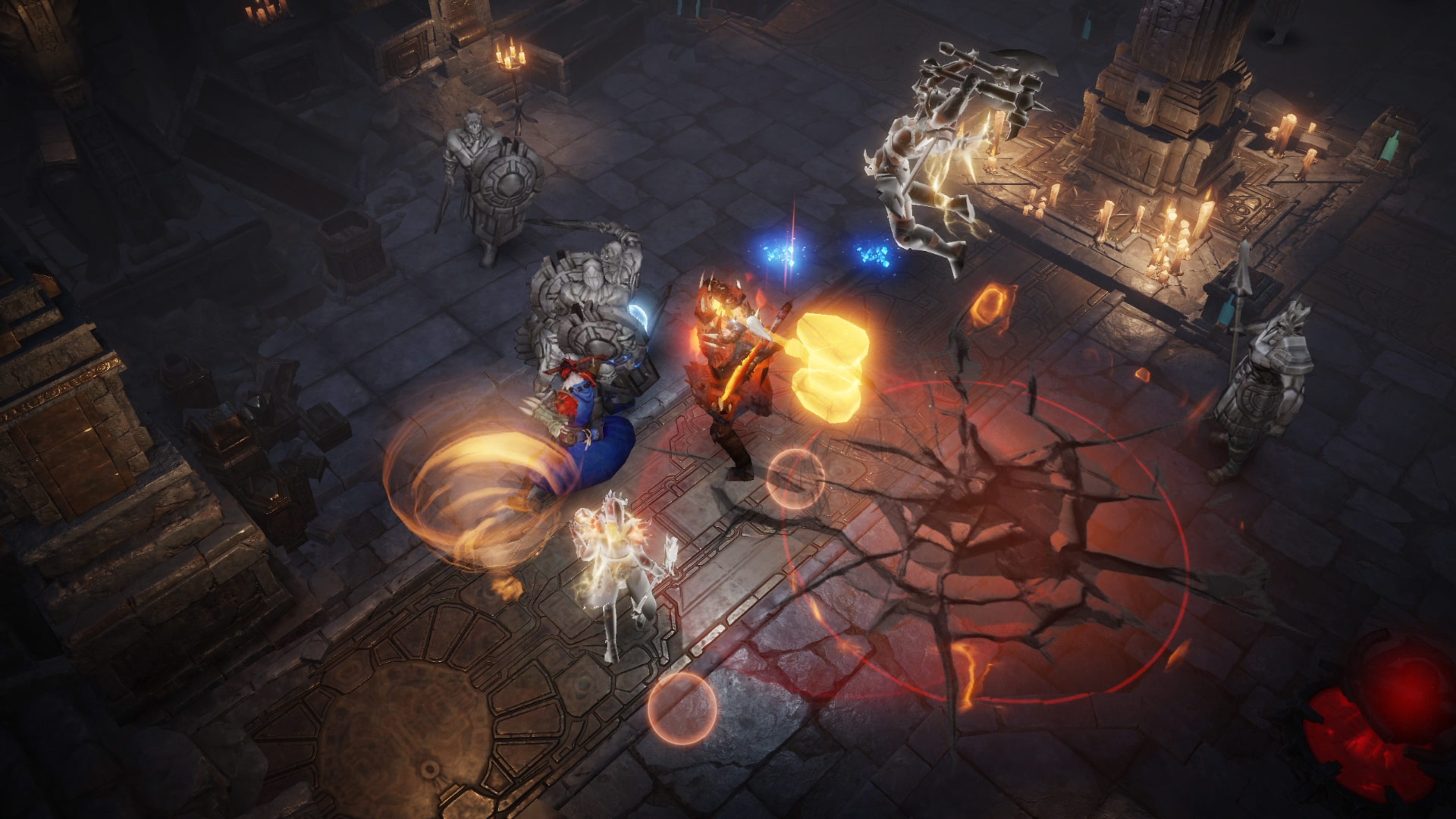 There’s a lot more to discuss when it comes to Diablo Immortal’s closed alpha, but for now I’ll just leave you with Wyatt Cheng’s thoughts on class design for Diablo Immortal, including some specific info about the Crusader class. “Whenever we sit down for any class,” he says, “we say, ‘What is the marquee skill that really defines the class?’ And when you picture the class, you say, ‘Well, it has to have this skill or it’s just not right.’

“And for example, in the case of the Barbarian, a lot of people would say, ‘Oh, well, a Barbarian has to have Whirlwind. It’s just not the Barbarian without Whirlwind.’ And on the Demon Hunter, a lot of people would say, ‘Multishot. When I think Demon Hunter, I think Multishot.’ And so that answer varies from person to person. In the case of the Crusader… the Steed Charge ability is iconic Crusader. And being able to throw your shield, and have it ricochet off of enemies is also this iconic Crusader ability. And so you can see both of those.

“Falling Sword has [also] received [a] facelift from Diablo 3… it’s gotten a little bit of an upgrade. We were looking at Heroes of the Storm, and the way that Heroes of the Storm does some of its skills, and Johanna in particular in Heroes of the Storm. So Falling Sword in Immortal allows you to throw your sword, which then marks a location. And for the next six seconds, that sword will actually pulse damage to enemies around the sword. And then you can activate the skill a second time during that window to then teleport and drop at that location. And so it becomes a two-stage activity with two presses. 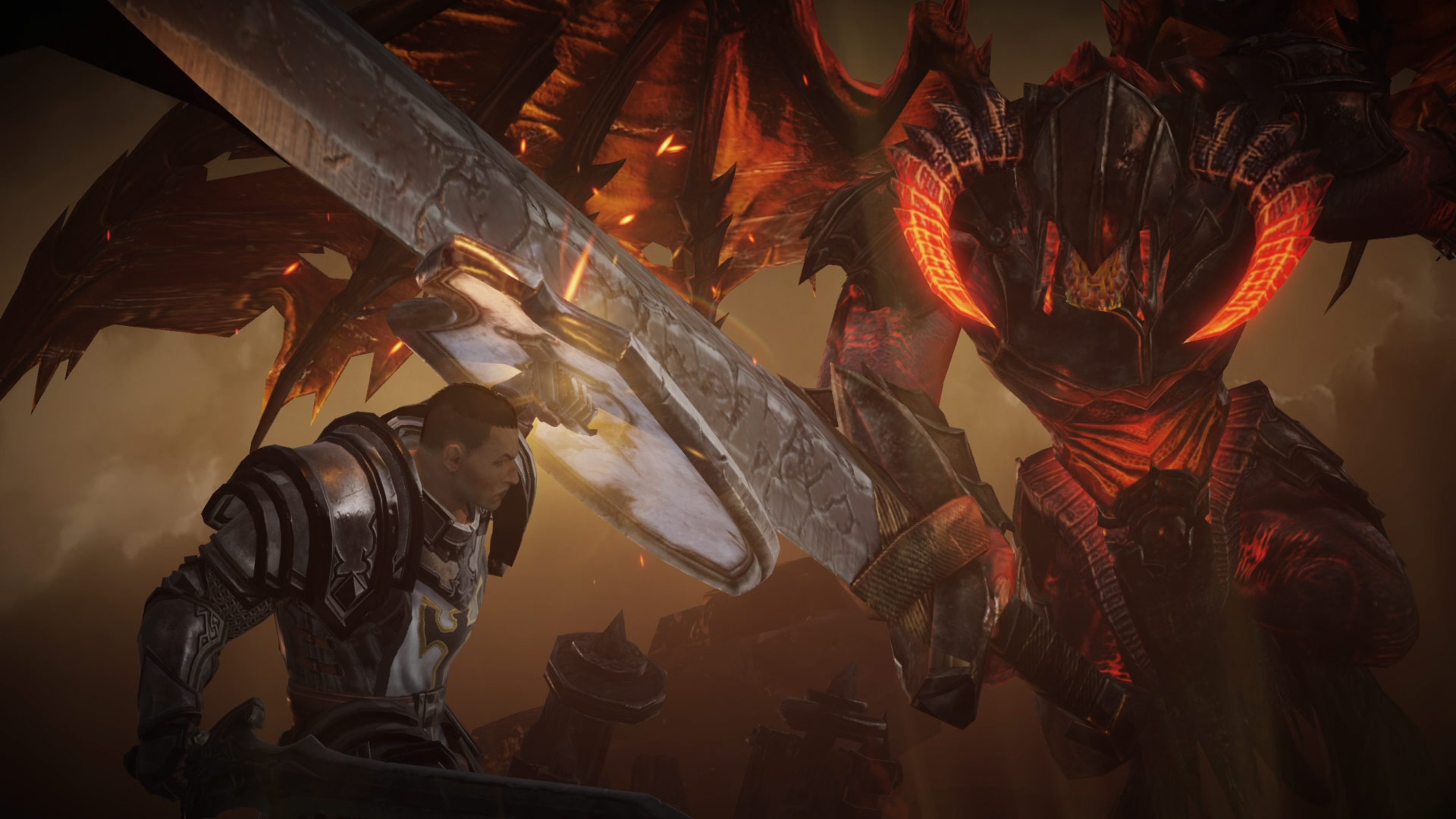 A bad-ass still from the male Crusader cinematic.

“And then the final note I’ll make on Crusader skills is, as with all of our skills, there’s some skills that seem familiar, but because of our mobile controls, have an opportunity to take on new life, because of the charge-up mechanic. In Diablo 3, pressing and holding a skill to charge it up, actually just viscerally doesn’t quite feel correct. We tried it during Diablo 3 development, and the players are just more looking for a fast paced button mashy feel. But on Immortal, our charge-up skills feel great, because you’re using these touch screen controls. You’re aiming the skill. You’re building up this power while you aim it. And then when you release, you unleash the power of the skill, and it feels great. And so the Crusader makes use of that input mechanic as well.”

While the closed alpha is currently limited to Australia and may remain that way (“We are looking at other regions,” says Wyatt Cheng, “but Australia is the only region that… we’re announcing right now”), your time may yet come, as Cheng confirmed that there will be at least one more testing phase before release and that phase will let players hit level 60.

For more on Diablo, be sure to read our Diablo Immortal technical alpha impressions (or watch the video above) and watch IGN’s Diablo II Resurrected performance preview.

Cam Shea is based in Sydney and can’t wait to sink some time into the Crusader. He’s on Twitter.