Disco Elysium – The Final Cut is a weird and wonderfully dark detective story that is quite unlike anything else you’re likely to have played. It takes the mechanics of a table-top role-playing game and seamlessly integrates them into an original story set in a world heavily steeped in politics. This Final Cut version of the game has new quests and full voice acting which really brings the world to life.

The game begins with you slowly waking up in a hotel room. You don’t remember who you are or what you’re doing there but you do have the mother of all hangovers. After talking to some of the guests in the hotel you discover that you are apparently a police officer who is supposed to be investigating a murder. Instead it looks like you’ve been on a drug and alcohol bender and have been slightly neglecting your duties. Even the murder victim’s body is still hanging from a tree, where it’s been for at least a week.

While having an amnesic protagonist is somewhat of a cliché in RPGs it’s used to brilliant effect here as you’re left in just as much of a confused state as the protagonist. You’re discovering things at the same time he is and can also shape his personality. The cop is constantly having conversations within his own head and how you respond during these moments can shift the tone from hilarious to bleak at the drop of a hat. The script is incredibly compelling; decisions and actions you take throughout your journey can catch up to you in ways you really don’t expect.

When you first start the game you get to decide what kind of guy the cop is. So if you want to be a Sherlock Holmes type who’s able to recreate a crime scene in his mind then you’ll pump skill points into all of the intellectual skills. You could also decide to be more of a wise-cracking detective, who has the ability to talk his way out of any situation. Or you can be a detective who’s a physically intimidating badass but is otherwise dumb as a rock. Whatever kind of cop you decide to be you’ll have to go around talking to everyone, picking up potential clues, and basically poke your nose into other people’s business.

There’re no traditional combat mechanics in Disco Elysium. Instead the protagonist’s successes and failures are determined through dice-roll skill checks. Having more skill points in the required skill will help improve your chances of succeeding but it’s still highly dependent on luck. If you fail it can be tempting to reload an old save and try again, but it’s also fun to just let the dice fall where they may and deal with the consequences.

You’ll be able to re-try some skill checks by either uncovering new information, or by levelling up the skill that’s being checked. It’s pretty interesting to see the number of different ways you can approach a task if you fail the initial check. Sometimes it’s much more fun to fail and see what inventive (and potentially ludicrous) alternative way you’ll be able to solve a problem.

Politics is a strong theme throughout Disco Elysium. The cop will lean towards communism, fascism, moralism, or ultraliberalism depending on how you interact with people. How the NPC’s react to you will change based on your ideology. No matter what side you lean towards or what kind of cop you are, you’ll never hit a dead end just because of your character build. It’s pretty impressive considering the sheer number of different play styles and different routes you can take.

There’s also a really unique system where the protagonist can literally equip thoughts into his “thought cabinet.” Early in the game I needed to get a dock worker to open up the doors to the harbor. I could have tried to physically over-power him but I knew that my puny strength stats made this unlikely. Instead, after having a little chat with him and discovering the guy was a racist arsehole, I decided to ponder some of his nonsense so that I could bluff and convince him that I was like him in the hopes that he’d let me into the harbor. It worked, even if it did leave me feeling like a slimy scumbag.

The main task you have will be to investigate the murder, but how you go about solving it is up to you. You’ll have a notebook which will slowly fill up with different tasks, some of which will have nothing to do with the murder. You can tackle these objectives in any order and so it’s really easy to let yourself get distracted.

Some of the side quests that seem completely random will end up opening completely new avenues of the investigation, so it’s always worth trying to complete them. Even if they don’t lead you on to any useful information about the murder, many of them are incredibly amusing or will help you to gain more of an understanding about the city and it’s residents. Some of them can even help you to uncover more about the forgetful protagonist’s identity.

The game is all about customization. Different skills, clothes, thoughts, and tools, can wildly change how you approach a situation. With an absolutely vast amount of branching dialogue, every player’s journey through Disco Elysium is likely to be very different. There’s no way to see everything in just one trip through the game. It’s brilliant at making you want to replay and see how a different version of the protagonist would have dealt with something, or what new things you could discover if you make different choices. 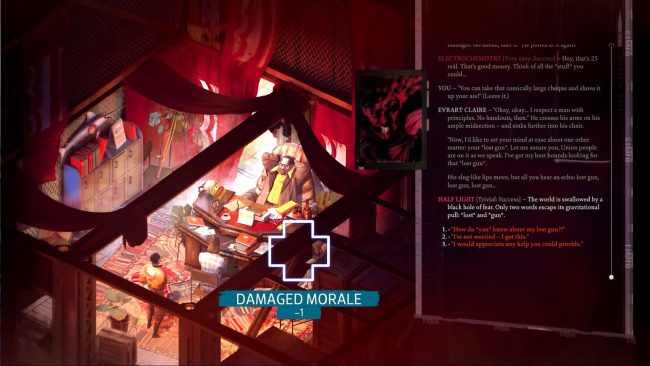 While most of my time spent in Disco Elysium has been an absolute blast, there are unfortunately a few issues with this port. The voice overs occasionally seem to cut out mid-conversation, which can be a little distracting. There also seems to be an issue with interacting with things. You’ll have to click on items multiple times before the protagonist will actually do anything. While the bugs are slightly irritating none of them are particularly game breaking. Thankfully the developer, ZA/UM, has already said that they are aware of the issues and are working on a patch which should hopefully address a lot of these problems.

Even with the handful of bugs this is a unique experience that is very easy to recommend. It’s an amazing RPG with an absolutely stunning amount of depth for a game where you’re mostly just talking to people. Both the story and cast of characters are highly memorable and no two players will have the same experience. It’s really easy to see why PC gamers have been raving about Disco Elysium, this truly is a must-play experience.