Battle passes are fairly common amongst multiplayer games. EA is just one of the many publishers to implement them in games like Apex Legends, but the publisher is seemingly looking to alter the tried and tested format. As spotted by GameRant, the company has submitted a patent for a Seasonal Reward Distribution System that allows players to choose what rewards they want to unlock.

The traditional battle pass format follows a single track of rewards. As players level up, they unlock rewards like player skins, weapon skins, new weapons, XP bonuses and in-game currency. The new format is based on a non-linear system, almost like a map or a game board. Players can make their own choices on how they progress through the map, choosing which of the interlinking paths they follow for the rewards they would prefer to earn. The paths would be made out of multiple nodes, each representing a reward. 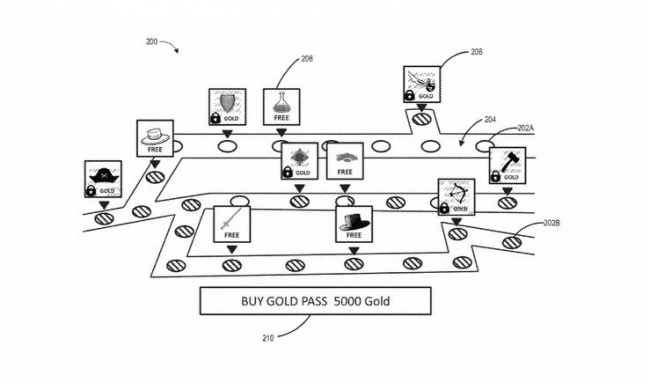 As the diagram shows, EA plans to keep the idea of rewards for both free and premium players. Some nodes are marked as free, while others require a “gold pass” to unlock. Players would seemingly be able to choose their rewards even if they stuck to the free Battle Pass.

Apex Legends’ new Legacy season introduced the latest battle pass to the game, alongside a new game mode, new Legend, new weapon, and an altered map. This pass follows the tried and tested linear format and it’s unclear whether or not EA will start trying this new format in their upcoming titles; the patent was only submitted on May 13 and it’s far too early for a decision. However, the publisher did send out a survey to Battlefield players to gauge their interest in a battle pass system amongst other aspects like free-to-play. We will likely see whether Battlefield 6 will include a battle pass when it’s revealed next month.

The post EA Applies for Battle Pass Patent Where Players Choose Their Own Rewards from Multiple Progression Routes appeared first on PlayStation LifeStyle.

The Medium Arrives on PlayStation 5 on September 3, Will Have Digital and Retail Release

World War Z: Aftermath is the ‘Next Evolution’ of World War Z Heading to PS5 and PS4

By World Games1 hour ago0