You’ve probably heard of Eldest Souls by now due to its name; an homage to FromSoftware’s Dark Souls series that’s as subtle as a brick flying through a window. And if you’ve been paying attention to the coverage its been getting for the past few months (some even written by yours truly), you’d have frequently seen it marketed as a “2D souls/boss rush hybrid”—a fact that the developers have worn on their sleeve for quite some time.

Some of these comparisons have some truth to them; the game’s worldbuilding is bleak and lonely, inhabited only by your character, a few strange and melancholy characters, and huge, terrifying god-like beings that could crush you with their pinky finger. The boss rush mechanic itself is also present in the Dark Souls series, albeit as footnotes to certain areas rather than comprising the entire game.

But if you’re looking for a game to truly scratch that Soulsborne itch, you should turn back right now. Eldest Souls, while inspired by the series like many other games in recent years, is practically nothing like it, for better and for worse. From the game’s combat mechanics and the skill tree system, to its wonderfully crafted 16-bit pixel art graphics, there are a lot of things here that make Fallen Flag Studio’s debut title stand out on its own. Here are a few of the notable ones, starting with the game’s aesthetics.

Probably the best aspect of Eldest Souls in my mind is just the sheer beauty of its level designs. The game takes players from grim, battle-torn citadels to the brightly lit wilderness that left me feeling both awestruck and lonely at the same time. It makes sense, too: there is no one around, save for your character and a handful of NPCs, often leaving you with only the sound of the wind to keep you company. And while you can still interact with said NPCs, the “quests” that they give you typically result in a back-and-forth between fetching a key item from a specific area or boss and receiving a stat-buff item as a reward. 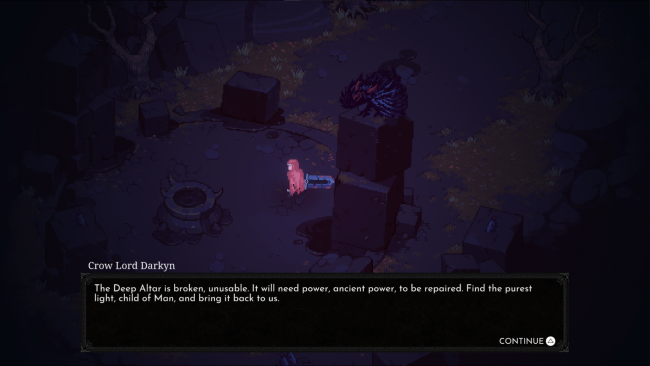 There is, of course, a storyline…technically. Eldest Souls attempts to mimic the fragmented storytelling of Dark Souls by adding tidbits of lore and backstory to its bosses, but much of it is simple flavor text that ends up as just a small bit of detail in each area, quickly forgotten as you go to the next.

Arguably the most interesting thing in the game graphically is the boss designs; when Fallen Flag Studio says that they focused on bosses, they really mean it. Every single boss is incredibly detailed and unique, both in design as well as combat. Each stage is also designed to fit the aesthetic of the boss and also forces the player to think about positioning and dodging. Eos’ boss fight, for example, throws players into a circular stage with limited space with many of Eos’ attacks taking up a big portion of the stage’s floor, requiring you to manage multiple enemies and projectiles simultaneously as if you were playing a bullet hell game.

This brings me to my next point: Combat.

The combat in Eldest Souls is more akin to Hades than anything, featuring a basic set of moves that revolve around dashing, charging, and dodging through enemy attacks. You play as the Crusader, wielding a comically large obsidian blade made of the only material capable of harming the Old Gods. In your repertoire, you have a basic attack and a charged attack, as well as a dodge that lets you roll through enemy attacks without taking damage.

By charging up your attack, you also gain a Bloodthirst buff, which gives you increased damage and also heals your character with each hit. In this state, you can also do a special Bloodburst attack that consumes the buff but deals massive damage. Once you’ve killed a boss, you also unlock special Shards that can be used to augment your abilities, such as giving more health per hit and AoEs when doling out Bloodburst.

In addition to these basic combat mechanics, you also have skill trees categorized into three distinct fighting styles: Windslide, Berserk Slash, and Counter, each with their own unique gauges and abilities. When I played, I was particularly interested in Berserk Slash, which focused on doing heavy damage and staying on the offensive, providing bonus damage and increased healing when I was using Bloodburst. However, if you’re more conservative, you can choose Counter, which focuses on tanking through damage and reflecting some of it back at the boss. 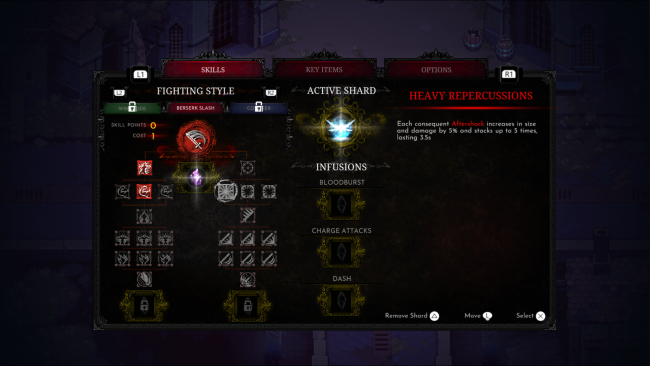 Each tree had a variety of nodes to choose from, each unlocked after spending a skill point earned by killing a boss. The good news is that, if you’re indecisive like me, you can also choose to completely re-spec into an entirely different fighting style. This means that the game allows—or rather, encourages—players to experiment with different abilities, Shard combinations, and infusions in order to find what you’re the most comfortable with.

Bosses in Eldest Souls are also incredibly unique, with each having different attacks, animations, and strategies, making experimentation that much more important. Where a certain fighting style might be effective on one boss, it could get you absolutely slaughtered by the next. The fighting styles are also distinct and varied enough that, given my time with the game, I always felt like there was something to learn from each. If a certain strategy didn’t work I could always try another or a different build of abilities and, to that end, I think the sandbox style of skill-building worked well.

Here’s where the problems start to arise, however. Unlike most souls-likes, Eldest Souls does not have a leveling up or upgrading system. In fact, there aren’t any equipable weapons at all; you use the same obsidian sword for the entire duration of the game. And because there is no leveling up, and therefore no stat increases, the only way to progress through a particularly tough boss fight is by repeatedly fighting the same boss over and over again to learn its telegraphed attacks or change up your play style. 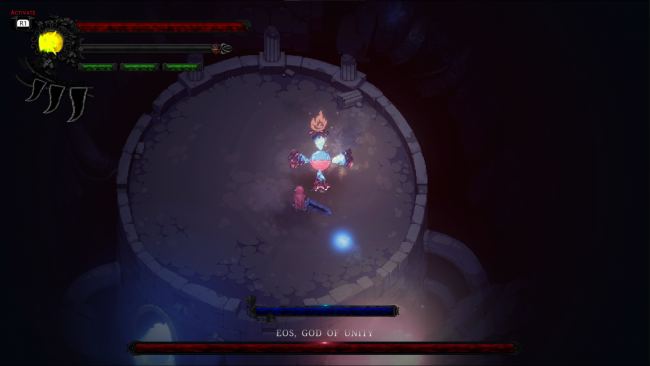 Now, this isn’t a problem in itself of course; I understand that some people enjoy the process of getting progressively closer to defeating a boss via player growth (and Eldest Souls is a self-declared “ferociously challenging” game). But the key difference between most games of this genre is that sense of progression; the feeling of getting somewhere or doing something, which I feel Eldest Souls lacks within its game system. Tried all the fighting styles, exhausted every ability, tested every Shard, and still can’t beat that boss? Well… not much you can do besides smacking your head against that brick wall some more.

Even after you defeat a boss, there’s not much left to do except go to the next boss room and rinse and repeat. You get awarded a skill point and a new Shard ability, sure, but most of the node skills are simply percentage buffs to your already existing moves (ie. do 5% more damage that stacks up to 3 times, move 50% faster, etc.). Personally, I feel like this is one of the least interesting ways to provide skill upgrades and in many situations ended up with me wondering whether I was doing any additional damage or healing at all.

Eldest Souls Review – Plenty of Content … If You Can Reach It

A lot of Eldest Souls’ problems would probably be fixed if they had a difficulty setting that you could change on the fly.

“It’s supposed to be a difficult game?”

See, I understand that to an extent. But it’s 2021, and in this day and age, I would much appreciate it if developers understood that there’s a lot more to games than simply overcoming an incredibly difficult and harrowing task. Not to mention, it also alienates a subset of gamers with disabilities, or simply don’t have enough time to dedicate hours in memorizing boss attack patterns and telegraphed move-sets.

Eldest Souls prides itself on repeated playthroughs, as well as an arena mode that is unlocked once players defeat all the bosses in the game. Once doing so, you unlock a New Game+ which adds new attacks for bosses to use and increases the difficulty even more. While I can’t comment on end-game content, the fact of the matter is that, up until that point, there is not much to go through within the base game itself.

This is why I don’t think it’s really apt to say that Eldest Souls is a Souls-like game (though what defines a souls-like game is really not a debate that I’d like to get into). Rather, I think it’s a boss-rush game with Souls-like aesthetics because, in terms of gameplay, the only real similarity with the Dark Souls franchise is the fact that it’s a difficult game with a stamina bar, boss fights, and a focus on dodge mechanics. Consequently, it’s also why I feel if you’re looking for a game similar to the Soulsborne games, Eldest Souls may not be your cup of tea. But hey, if you’re a fan of boss rush hack-and-slash games, why not give it a try?