Uruguayan engineering student, Maximiliano Palay, has shared a detailed breakdown showing how he built Cablecam, a DIY cable camera. While this isn’t exactly your weekend Raspberry Pi project, if you have the engineering chops (as well as time and money), it is something you can piece together yourself.

The Cablecam, as Max calls it, was the first project of his to integrate all of his disciplines together: ‘software, hardware design and a couple of fabrication techniques’ and was his first attempt at creating a moving robot. Max says he made most of the Cablecam from parts he had ‘laying around,’ but unless you have access to a 3D printer and a CNC machine, and have a few pocket computers and motors sitting around, you might need to purchase a few items. Below is a list of the key components Max used to create the Cablecam:

Like other cable (or line) cameras, the Cablecam can run along a string or cable in one axis to give a dolly-style effect without the need to set up a complicated rail system. The frame of the Cablecam is constructed of CNC-milled wood pieces with 3D-printed gears custom made to maximize torque from the brushless motor. Below is a video showing the gears in action without the motor attached:

To drive the motor, Max used an electronic speed controller he had sitting around, but it was leftover from a drone project, so it didn’t offer a reverse option. To fix this, Max added a polarity switch using four relays with an Arduino so that when the polarity is switched, the Cablecam moves in the opposite direction. The batteries used to power the Cablecam were ‘harvested cells’ taken from an old laptop.

The camera onboard the Cablecam is an Arducam inside a custom 3D-printed case attached to a Tarot two-axis gimbal. Max used a wide-angle smartphone camera lens adapter from a kit in front of the Arducam to get a wide angle-of-view. The entire Cablecam is powered by a Raspberry Pi 4, which communicates wirelessly with the base unit.

To take it a step further, Max also integrated Nvidia’s pre-trained neural networks to add an automatic mode that identifies and tracks people based on certain criteria. This takes footage sent to the base unit from the Cablecam, analyzes it, then automatically moves the Cablecam to center the subject in the frame, as seen in the below demo video (Max apologized for the poor video quality):

This isn’t your average DIY project, but it goes to show that even complex pieces of camera equipment can be made if you have the knowledge and equipment available. If you’re brave enough to attempt your own Cablecam, be sure to shoot us a message so we can feature it as well. 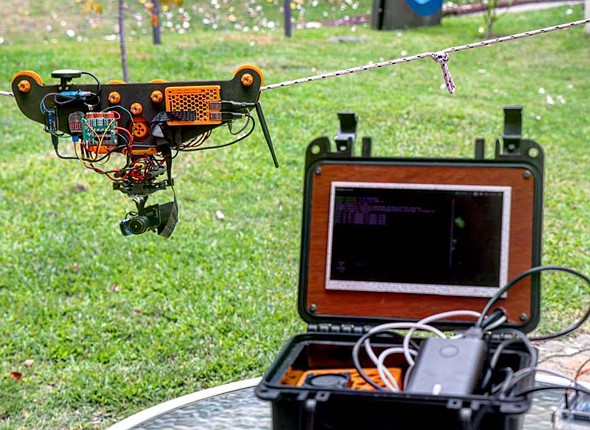 The full project breakdown can be found over on Hackaday, where Max shares some of the resources he used to get everything up and running. You can find more of Max’s projects on Hackaday and keep up with his engineering feats via his LinkedIn profile.

Sony to announce a new camera in the next 24 hours

How to turn your smartphone into a better vlogging rig