By the time I discovered the Fatal Frame series it was near impossible to find copies of the first three games on PlayStation 2 anywhere. No one wanted to part with these niche Japanese horror games for a price that was compatible with my wallet. The Wii U’s Fatal Frame: Maiden of Black Water coming to current gen consoles as a port did pique my interest, and I finally a chance for me to experience this popular franchise myself.

In this fifth installment of the Fatal Frame series, players explore the haunted Mount Hikami. It’s a popular suicide spot with a tragic past. The massacre of miko tending to the mountain shrine decades ago has left its mark on the region. New characters join the Fatal Frame roster: Yuri, a young woman who works in the antique shop and has unique spiritual abilities, and Ren, an author who came to Mount Hikami in search of his next hit. Joining them is Miu, a legacy of the series. These three characters take us through this story armed with a mystical tool: the Camera Obscura. These special cameras are connected to the spiritual world. We can take photos of lingering specters, pull objects from the other side into our world, and turn the Camera into a weapon should a malevolent ghost attack. 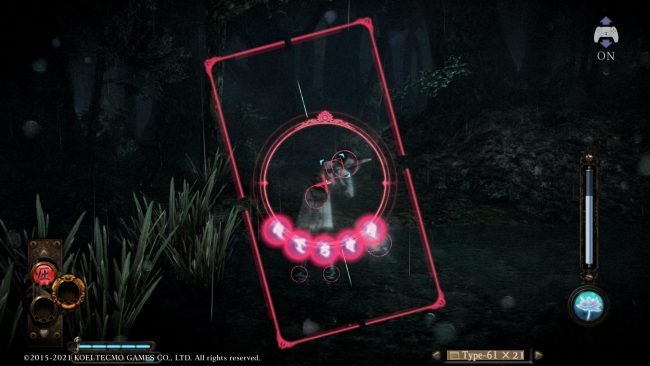 Each chapter puts us in the shoes of one selected character as we explore the mountain region with our Camera Obscuras in hand. But immediately I am struck by something extremely wrong with Maiden of Black Water‘s story: no one is actually scared. And that includes myself. No one in the entire cast looks or even sounds spooked at any time. There could be a half dozen bodies floating in a pool or a burning ghost running at me dead on and there is no semblance of fear. I know this is simply a port of a Wii U game and that there’s no new voice over or updates to the character models, but blank faces and deadpan vocals really kills the vibe. Nothing kills the mood like Yuri trying to deal with ghosts while babysitting an NPC wandering aimlessly into my shots.

It’s also chockful of as many tropes as could be crammed into one game. This muddles the experience and weakens the overarching story. Now, I love horror tropes when they are tastefully done and you focus on properly executing a handful of them. If Maiden of Black Water had nixed Miu’s entire storyline and kept the focus on just Ren and Yuri’s paths, they could have tightened up the writing and pacing. Maybe then I would have encountered a real “oh sh-t!” moment. Instead, I walked into every damn situation only to be disappointed and slapped in the face with distracting, over-the-top innuendo. 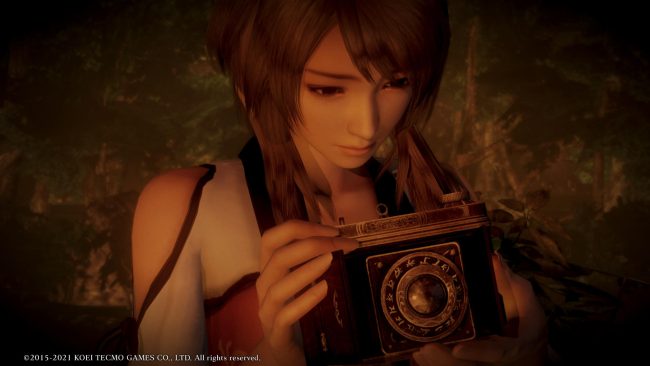 The Camera Obscura is a pretty awesome game mechanic. Just like the flashlight in Alan Wake, it’s one that I think is wonderfully executed and memorable. The primary use is as a weapon. Using various types of film and modifiers, players will damage and eventually exorcise malicious ghosts. Damage points are determined by how many targets and attack points are included in each shot. It will take multiple shots to eradicate the ghosts. Special film or lenses can make things easier, for a price. Each film type has its own reload time, which affects your attack speed. Same thing happens with the burst lens. There are so many ways to deal damage that it might feel a little overwhelming at first.

At the beginning of each chapter you can cash in your points for things like healing items, film, lenses, and costumes. Since healing items and generic film seem to be commonly found items I never really found a reason to spend points on those things. If it weren’t for my compulsive need to unlock as many items as possible, I wouldn’t have unlocked most of the costumes. The only story relevant costume in the bunch is Ren’s groom outfit. Everything for Miu and Yuri is just unrealistic fanservice with no ties to the game. Nothing wrong with fanservice if it makes sense. No one is legitimately investigating the disappearance of a dear friend in the woods wearing a wet bikini. 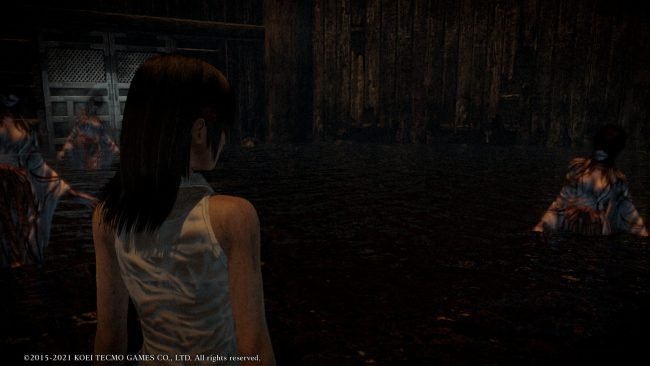 I did experience some issues using the Camera Obscura. The DualSense controller’s built-in motion control option allows the option to play Fatal Frame on the PS5 similar to how it played on the Wii U. I found that combining the motion controls with manual control did not work in my favor. After a couple of chapters trying to use both and getting a tad frustrated I had to turn it off. Nothing sucks more than lining up the perfect shot and ruining it because you needed to rotate a stiff shoulder. Then there was finding the exact perfect angle to manifest an object from the spirit world into reality. If you are even the slightest bit off that function of the camera will not trigger.

Not only that, there are problems with the controls in general. R2 focuses on the phantom or route we are supposed to take or pick up an item. But if you are too close to an investigation point which claims to require Circle, pushing R2 will trigger that instead. This is either lazy programming or a bug no one cared to fix. But that error really gets annoying when it just keeps happening. There’s also this things where when you reach down to pick up an item the camera is pointing in the opposite direction when you stand back up.

It’s unfortunate that Koei Temco has no intention of remaking or remastering the Fatal Frame series from the beginning. This slightly upscaled and modified port from Nintendo Wii U to current gen platforms puts forth a subpar experience that doesn’t sell me on the series. It seemed to just be the most convenient installment to make available for the 20th anniversary and it shows. If you’re like me and Maiden of Black Water is your first Fatal Frame game, I recommend you keep those expectations low.

By World Games21 mins ago0