How do you make a perfect game… more perfect? Put it on PS5 with better framerate, better lighting effects, better resolution; just in general give the whole thing a boost. That’s in effect what Final Fantasy VII Remake Intergrade is. Despite the fancy new name, this is the same Final Fantasy VII Remake you know and love, it just somehow looks and plays even better than before.

In terms of Intergrade, our original review still stands, so I’m not going to rehash what made last year’s game so amazing. This is still that same perfect Final Fantasy VII Remake, made better with the power of the new-generation PS5 hardware. Performance Mode will give you a beautiful and smooth 60 fps, while Fidelity offers up a stunning 4K picture. Both provide enhancements to the lighting and textures, just all around giving an already stunning look game an added boost. Did I mention that Intergrade adds a Photo Mode? While it’s not the most intensive of Photo Modes, it provides some great opportunities for amazing in-game shots that you couldn’t get in the PS4 version of the game. 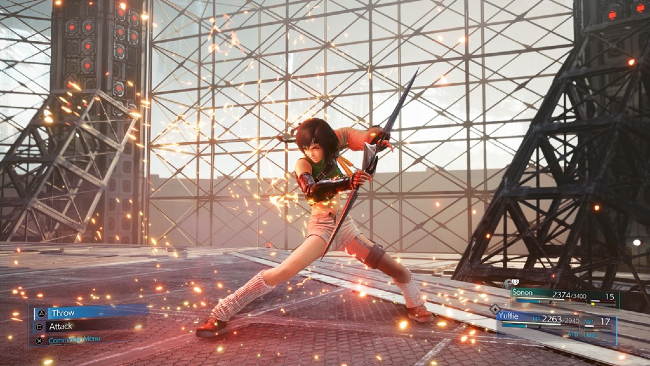 Best of all, it’s easy to recommend. If you have the PS4 version, it’s a free upgrade to Intergrade (though the upgrade will require separate purchase of the Episode INTERmission DLC chapters for $19.99). And if you haven’t purchased it yet, 1) what are you waiting for? and 2) lucky you, you get the complete package with the added Episode INTERmission DLC included. Previous players will also pop all of their last-gen Trophies, so if you already have Platinum, you’ll welcome a second Final Fantasy VII Remake Platinum to the stack instantly when you transfer your save file. And there are a few new Trophies to chase as Yuffie as well.

The real gem added onto Final Fantasy VII Remake Intergrade is Episode INTERmission, a Yuffie-centered DLC exclusive to this PS5 version of the game that explores a section of Final Fantasy VII Remake’s story from a very different angle. Yuffie arrives in Midgar shortly after the bombing of Make Reactor 4, when Cloud is separated from the rest of Avalanche. Her goal is to steal the Ultimate Materia from Shinra with the help of Avalanche, albeit a different cell of the resistance group than the ones we’ve come to know and love. Over the course of two chapters, we get to know a character who was once just a secret optional side character in the original 1997 Final Fantasy VII.

To both its strength and its detriment, Episode INTERmission is a completely new side story. While the base Final Fantasy VII Remake game weaves between exciting nostalgia-inducing moments and new ways of approaching things, Yuffie’s brief adventure feels like it’s more about laying the groundwork of exposition and background for assorted elements to come into play later. We get a better understanding of the conflict between Wutai and Midgar, which is in reality a conflict between Wutai and Shinra. It begins to lay the (deep)groundwork for Deepground, a Shinra lab built within Mako Reactor 0 at the center of the city, which became prominent with the Vincent-centered Dirge of Cerberus -Final Fantasy VII- PlayStation 2 game (another optional side character from the main 1997 Final Fantasy VII). But it lacks the strength of the moment-to-moment waves of nostalgia that Cloud’s adventure through Midgar had. 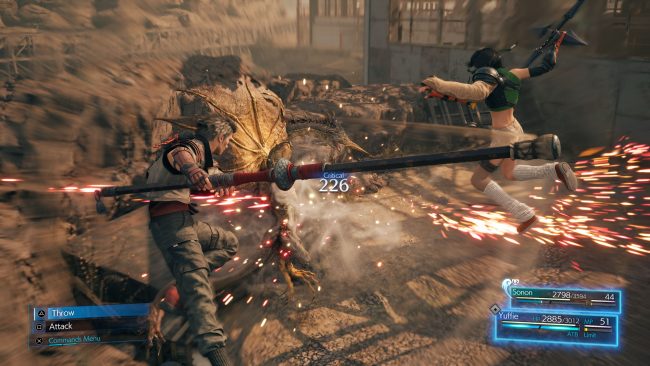 That’s not to say that Episode INTERmission lacks strength entirely however. Final Fantasy VII Remake has centered on building out its world and characters in bigger ways than we’ve ever seen before. So Episode INTERmission takes Yuffie and endears the player to her in a way the the original game never did. The relationship between Yuffie and Sonon (and hints at story elements involving Yuffie’s father), the war between Wutai and Midgar/Shinra, and even Deepground, which is really starting to pull from the extended Compilation of Final Fantasy VII lore. It provides some hints as to where Final Fantasy VII Remake is going with future games, but more importantly it weaves a more solid framework of this world.

Yuffie’s combat feels a lot more action-oriented than the main Final Fantasy VII Remake game. Yuffie has an assortment of powerful moves that can decimate a crowd of enemies in short order. Her companion and fellow Wutaian ninja, Sonon—an all-new character to the Final Fantasy VII canon—isn’t a playable character, but you can issue orders and commands to him, as well as perform powerful synergized attacks with the duo. At times it can feel much more hack’n’slash than playing as Cloud, but there are still a lot of things you can do within the commands menu to add a bit of that turn-based strategy element back into each battle.

The first chapter of Episode INTERmission isn’t quite as combat heavy as the second, focusing instead on exploration of Sector 7 and a few side quests and minigames. It’s here that you’ll be playing the new Fort Condor strategic tower defense battler game, a concession Square Enix made which seems to indicate that the actual Fort Condor tower defense battle from the original game wouldn’t be a part of future Final Fantasy VII Remake installments. (How that will play into the quest to obtain the Huge Materia and Phoenix Summon from Fort Condor remains to be seen.) It’s a fun little distraction with some nice variants depending on what difficulty you are playing on.

It’s fun to see an assortment of characters, moments, and places from a different angle thanks to Yuffie’s story, but again, it does miss the far more nostalgic moments from the main game. And by the end, Episode INTERmission still just feels like an optional side jaunt. Even its mid/post-credits scenes are largely unrelated to Yuffie’s experience, acting more as director’s cut extensions of the main game’s ending cinematics (and wow, the reveals that they hide behind these scenes are set to have enormous implications on the future of the series). Still, it’s a brilliant spotlight on a previously underutilized side character, which should help better ground her once she officially joins the main party.

Episode INTERmission also brings new battle simulations into play, giving you the new Ramuh summon materia, and letting you take on a few new difficult boss characters. There’s a new box-breaker challenge too, with some added twists to account for Yuffie’s distinct fighting style. Altogether, you’ll get a good 5-10 hours out of Episode INTERmission, depending on whether you just play through it once or challenge yourself to complete all of the extras and both chapters on hard mode. What the DLC lacks in that nostalgia factor, it makes up for in telling a great character story and expanding on certain themes and elements, simultaneously feeling new and optional but effectively weaving itself into the current fabric of the game.

As a complete package, Final Fantasy VII Remake Intergrade just feels like the definitive version of an already perfect game. And the addition of Episode INTERmission is a great excuse to bring old players back for new content (or just a solid extra couple of chapters for new players). For those just jumping into Final Fantasy VII Remake for the first time with Intergrade, consider me jealous. I wish I could play it with fresh eyes all over again. For the rest of us who finished it last year? Maybe it’s a good excuse to revisit Cloud’s journey through Midgar, even if we already have that Platinum trophy. Either way, the only downside of Intergrade is making the wait for the next part of the Final Fantasy VII Remake saga that much more difficult.

Dragon Age 4 Is Reportedly on Track for Release in 2023