Golf Club: Wasteland is a sidescrolling indie golf game. However, the golf course in this game is the remnants of a shattered Earth, abandoned years prior by the last of humanity, now living out their days on Mars. Occasionally, the elite of the elite head back to Earth to play a few holes of golf on the planet-sized grave of human civilization. It’s a not-so-subtle commentary on the direction the world seems to be headed, and while Golf Club: Wasteland opens up with a disclaimer that references to real people or events aren’t meant to defame, it doesn’t really pull its punches in declaring the apocalyptic state of the world to be the fault of the ultra-rich.

But that declarative point is Golf Club: Wasteland’s strength. Over the course of 35 holes, you’ll come to learn the backstory of the event known as The Catastrophe. You’ll learn who this lone golfer is and why he’s returned. You’ll hear stories of those stuck on Mars, and spoilers, life on the red planet isn’t all that glamorous. The story is largely told via two channels. On one side, completing holes in under a certain amount of strokes will unlock diary entries that give you insight into the golfer and his story. 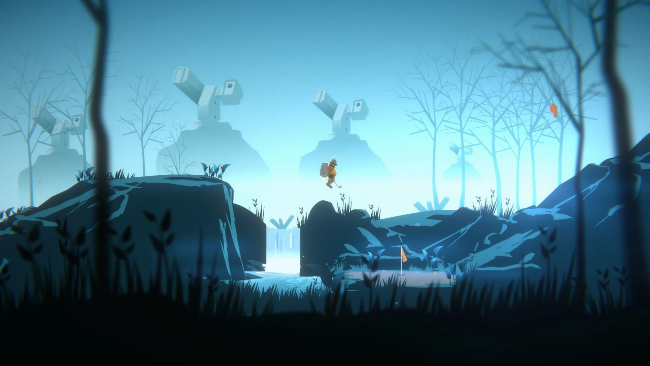 Casual flight of a lonely golfer.

On the other, Radio Nostalgia from Mars is the game’s soundtrack, a calm NPR-like radio show that mixes stories from callers with eclectic and relaxing music that perfectly encapsulates this strange barren planet you’re golfing on. Some would share stories of hope, some would complain about the restrictions placed on the Mars residents as their life was now run by a corporation in an inhospitable environment. “Is living this way on Mars really worth living at all?” one ponders. The show’s host also relays some public service announcements, which further provide a window into life on Mars, including rationing water (only 30 second showers, could be lowered to 27 seconds if they don’t recycle the lab rat pee), people going a bit stir crazy and requiring anger management and therapy, and days that are 2.7% longer than earth days.

The common theme is that people miss what they had on Earth. Blue skies. Sounds of nature and cities. The feel of grass. And all of this while you golf in the ruins of that nostalgia. People often made it on the ships to Mars by sheer luck, but were they really the lucky ones? It’s a poignant contrast that works really well. Additionally, the world is laden with meme-like billboards, signs, and background imagery, which presents quite the commentary on where the developers seem to feel the world could be headed. We already live our lives on Twitter and the rest of the internet, heads buried in our phones, and the world is starting to adopt internet culture on the main stage, which makes Golf Club: Wasteland’s absurd post-apocalyptic Earth not actually seem all that strange.

Golf Club Wasteland Review – Who Wants to Golf When the World’s Dead?

If anything, Golf Club Wasteland’s weakest point is in its actual golfing. Certain holes of the 35 total can get more frustrating than fun, requiring a series of precision shots to land on specific platforms lest you lose your ball or fall back to the earlier parts of the level. Others are straightforward and rather boring. A few clever ones scattered throughout have some creative mechanics, like pipes that redirect the ball or escalators that carry it to another floor. I would have liked to see more of these make it more of a puzzle game, rather than a gauntlet of difficult lob shots to small platforms and ledges. 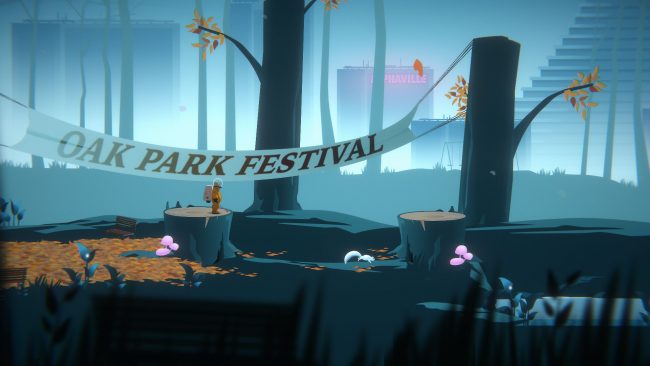 You’ll have to land your ball perfectly on each stump, lest the leaves or squirrels claim it.

Mechanics are simple enough, but with the often tight tolerances that levels have, simple mechanics can work against it. The strength of the swing felt inconsistent, with the difference between a small putt and a hard hit a very narrow window. You’ll use the left analog stick to aim and determine the strength of the shot, but even after messing with the sensitivity, I couldn’t ever get it to feel precise or predictable. The angles and power of my shots never felt like they were dependable or persistent. This made tasks like lobbing the ball up a bunch of flights of ruined stairs a chore.

Moreover, the level design often doesn’t effectively communicate where the ball can and can’t go and what will block your shots or not. This means a lot of trial and error, especially taxing in some of the longer levels. There’s also no quick restart feature, and the pause menu takes an obnoxious amount of time to pull up (needing to do its panning-up animation every single time), which makes restarting the hole cumbersome if you feel like you’ve made too many mistakes as you experiment with the mechanics and terrain. 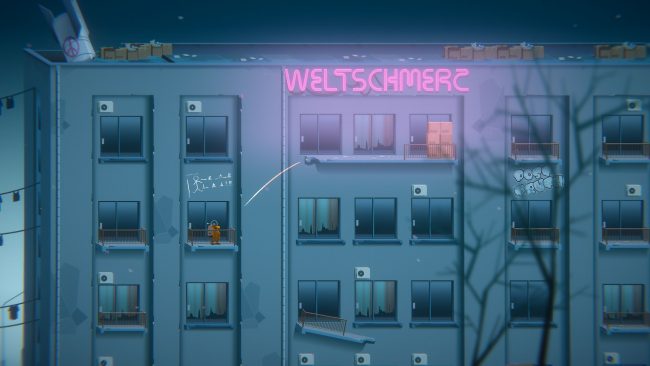 Despite arcing high, this shot won’t reach that ledge, and will fall into the hazards below.

This is in stark contrast to a number of little secrets and fun interactions hidden through the game—like lighting up sales signs in a store by hitting them or seeing where mysterious pipes might send your ball to—something I wish Golf Club: Wasteland would have doubled down on more rather than focusing on making frustratingly difficult levels that require lobs to barely reachable and tiny platforms. After all, shouldn’t the fun of golfing on an abandoned planet be the fact that you don’t have to be precise or play by the rules?

Golf Club: Wasteland has three modes for its 35 levels. The first is a story mode, allowing you to take as many swings as you want and also letting you skip levels if one proves too difficult. The second is a challenge mode, which is the same as story mode, but limits you to a certain par on each hole. You’ll have to score under par if you want to progress. And finally, completing challenge mode unlocks Iron Mode, a single “life” test of skills (and luck) that will require you to play near-perfectly to complete. Given the frustrating and imprecise golf mechanics, tight tolerances of some level designs, and many, many ways you can make mistakes, this seems like a frustrating challenge few would want to take on—and one that fewer still will even complete. And yes, it is required for the Platinum Trophy. 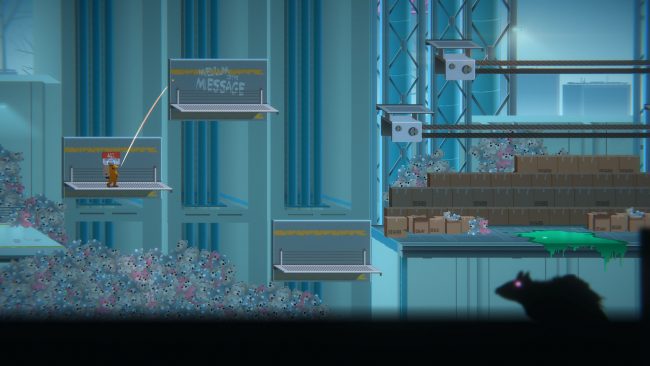 Oh joy, another gauntlet of lobbing the ball onto platforms.

Golf Club: Wasteland has a great vibe for its somber and solemn story about the end of the Earth, and I loved the concept behind its world. But it’s burdened by a golf game that is simply not all that fun (granted, perhaps it shouldn’t be fun to golf on the headstone of humanity). Occasional moments that seemed to portend exciting new golf puzzle mechanics were quickly followed by more lobbing to almost out of reach platforms, made intolerable by frustratingly simple mechanics that seem to have an air of randomness and luck. But while I won’t be subjecting myself to Iron Mode, I did thoroughly enjoy the story, art, and music throughout as it plainly commented on the state of the world, making at least one round of golf on this post-apocalyptic world very cathartic indeed.

PlayStation Now Getting Five Final Fantasy Games Over the Next Few Months, Starting Next Week