When I happened upon the whimsical and charming stop-motion claymation style of Harold Halibut earlier this year, I instantly became enamored with this retro-futuristic adventure game about a city-sized ship crashed and stranded on an oceanic planet far from Earth. Having been stuck there for 250 years already, most of the ship’s inhabitants have resigned themselves to a life aboard the vessel, deep underwater, with no hope of ever leaving. After all, this is the only like they know. The game focuses on Harold, a lab assistant, who goes from a mundane life aboard the ship to being caught up in the  strange events and goings on around him as mysteries big and small unfold.

With the Tribeca Film Festival’s addition of games this year, I had a chance to finally go hands on with Harold Halibut myself to get a sense of of what this stunning stop-motion adventure game was all about.

Perhaps the most incredible thing about Harold Halibut is how much it feels like I’m playing within an actual diorama or dollhouse. There’s a “next-gen” quality to the game that comes from its inherent realism, that is to say, how realistic the clay character models and miniature constructed environments are, which isn’t all that strange considering everything in Harold Halibut is actually made up of real objects that are then scanned into the game. This is why it’s taken years at this point to put everything together, as the team at Slow Bros. pursues a rather non-traditional and more physical development path.

Harold Halibut is largely 2.5D sidescrolling, with some 3D depth elements to it, which really allows the environments to retain that dollhouse-like feel. Only this dollhouse is an enormous ship crashed at the bottom of an alien ocean. While there are plenty of mysteries along the main story path, I couldn’t help but take some time during my preview session to explore interactions with other characters who had only known this ship their entire lives. There’s a wonderfully bizarre quirkiness to everything, from the depressed shop owner worried he was losing the affections of his wife, to the security officer and delinquent kid who talked circles around Harold. 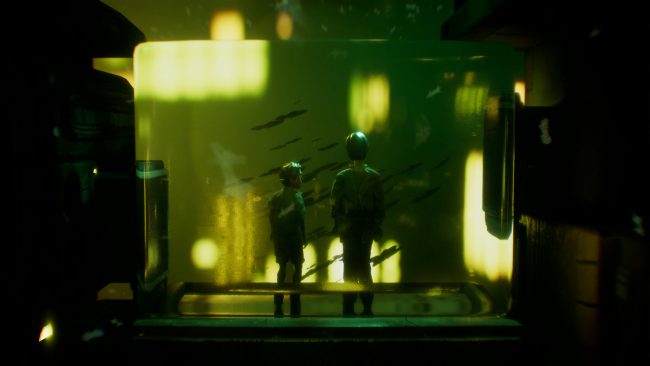 Harold Halibut’s unique setting and story makes you want to get to know every character you come across, always wondering if and how their stories will tie into Harold’s own. Additionally, Harold’s generally monotone and comparatively dull personality really contrasts the quirkiness of those around him. In this case, “dull” is not a bad thing. Harold becomes the perfect player vehicle, a window into this bizarre and wonderful world, and an excellent mundane foil to the weirdness that plays out around him.

In addition to those interactions with side characters, like taking a jog around the shop area with a couple of other shipmates, or going fake skiing with the use of some “fancy” technology, the demo started to unravel the main story of characters who were looking for a way to leave this watery prison they’d all been confined to. A recovered broadcast from Earth seemed to indicate that perhaps they were a little too hasty to abandon our blue and green marble. And after 250 years underwater, it seems that there might be an energy crisis brewing aboard the ship.

Even though I got a good hour with Harold and his strange shipmates, it felt like I was barely scratching the surface. I wanted more of this strange world. I wanted more of these crazy characters. And I wanted to uncover the secrets that were held behind mysterious messages and gifts. What this demonstration proved to me—apart from making me itch for more—is that Harold Halibut manages to perfectly capture both the claymation stop-motion aesthetic and the feel of classic adventure games. I can’t wait to dive into Harold’s world when the full game releases “soonish.”

The post Harold Halibut Hands-On Preview – A Bizarre Stop-Motion Tale From Beneath an Alien Sea appeared first on PlayStation LifeStyle.