0
For Hearthstone players, this is hands-down the best time of year, as around this time the game sees a massive shakeup, with three (or so) sets of cards leaving and one new set coming in. For 2021, however, the Hearthstone Team is going way beyond that and also changing the very bedrock of the game. For those that don’t know, Hearthstone’s foundation for the past seven years has been the Basic and Classic sets – the cards that the game launched with. Not only has Hearthstone evolved significantly since then, but those cards were never designed for the specific purpose of being the game’s base, and some classes simply have better options in that original collection than others.

No more. This year, those cards will be replaced by a new “Core set” of 235 cards, including 29 brand new designs (which you can see below) and many returning cards that have been reworked. This will effectively reinvent each class, as many of the cards that have been fundamental to their archetypes will no longer be in the Standard format. Not only will this help Hearthstone feel radically different in 2021, but in future years too, as the Core set will change annually, and giving the Hearthstone team a lot of latitude to shape the game based on what they have planned for each 12 month block. It’s a fantastic change, in other words, and the icing on the cake is that all players will have access to the full Core set at no cost, providing a solid baseline collection for even brand new players.

Of course, the usual rotation rules also apply, which means we’re saying goodbye to the Year of the Dragon sets – Rise of Shadows, Saviors of Uldum, Descent of Dragons and the mini-set Galakrond’s Awakening. And coming in, we have the Year of the Gryphon and its first set Forged in the Barrens, a Horde-themed expansion that introduces 135 new cards and several new mechanics. These include spells that rank up depending on how much mana you have available, and the new keyword Frenzy, which is a one-time effect that triggers the first time a minion survives damage.

As I said, it’s a great time of year, and today IGN can add to the excitement by revealing a brand new Mage legendary minion from Forged in the Barrens, Varden Dawngrasp: 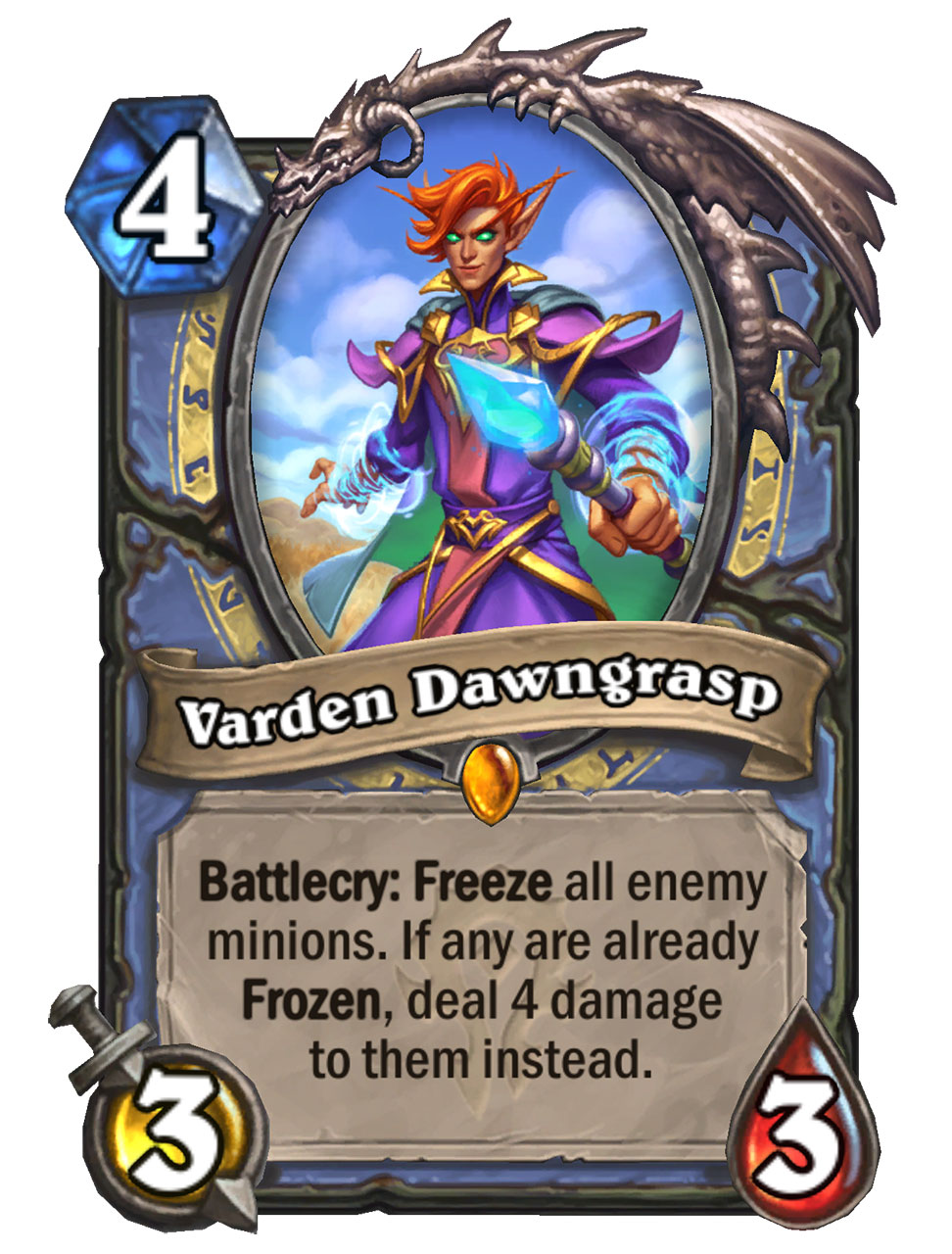 Not only does Varden Dawngrasp have a pretty compelling ability, but they’re also significant in a couple of other ways. Dawngrasp is Hearthstone’s first openly non-binary character, for one, and secondly, this character is one of the ten mercenaries that will anchor Hearthstone’s new year-long narrative and tie into the game’s upcoming Mercenaries mode.

But the most crucial question for when the Year of the Gryphon kicks off is – how powerful is Varden Dawngrasp likely to be? Well, at the very least it’s like playing a Frost Nova with a 3/3 minion attached for four mana, which seems reasonable, provided stalling for a turn fits into your game plan. If you’re playing a controlling Mage, for instance – perhaps working towards a new win condition like Mordresh Fire Eye and utilising cards like Reckless Apprentice, Fallen Hero and Coldarra Drake – then cards that help you get to the late game like Varden Dawngrasp are likely to be very valuable.

And then it also has a big upside of – potentially – functioning as a board clear if you can freeze the opponent’s minions first. Of course, that won’t be as simple as it would have been before the Core set. Cards like Frost Nova, Frostbolt and Blizzard, for instance, are all going to be out of the Standard format. So too will Ray of Frost, from Rise of Shadows.

In terms of Frost cards that will be in the Core set, Snap Freeze and Cone of Cold will both pair extremely well with Varden Dawngrasp, and indeed, will be cards you’re more likely to want to play in general – both have been buffed as part of the sweeping changes the Hearthstone team are making to many of the existing cards to bring them into line with the power level of modern day Hearthstone. (Cone of Cold has gone from four cost to three, while Snap Freeze has changed from two mana to one.)

Beyond those two, we don’t know quite how much freeze support will be printed in Forged in the Barrens, but we have seen one card that very much synergises with Varden Dawngrasp – Flurry. This zero cost spell can freeze a random enemy minion in the early game, but ranks up as the game progresses, freezing two once the player reaches five mana and then three once ten mana is available. Obviously the random nature of Flurry’s freeze means you won’t necessarily be able to specifically target the exact minions you want to remove using Varden Dawngrasp, but even so, anything that Flurry freezes will take four damage and then anything else will be frozen. Neat.

Zero mana spells are always worth paying attention to.

The Year of the Gryphon kicks off on March 30th (March 31st in ANZ) but it’s worth quickly pointing out that some very cool changes will be live before then. Hearthstone will be patched with all the new content and changes ahead of the March 30/31 date, and while things like the shift to the Core set and the release of Forged in the Barrens will obviously wait, Classic mode – which is a snapshot of Hearthstone exactly as it was in June 2014 – will go live, as will a wide array of reverts to cards that have been nerfed over the years, such as Call to Arms, The Caverns Below, Starving Buzzard, Conjurer’s Calling, Flametongue Totem, Undertaker and Knife Juggler. There are so so many. Wild format is going to be insane.

All in all, this year in Hearthstone is shaping up to be pretty special. If you’re interested in getting a start on your Forged in the Barrens collection, pre-purchase bundles are available right now. See you in the tavern!

Cam Shea is based in Sydney, Australia and recently put together a video showcasing 150 Tiny Things That Make Breath of the Wild a Game for the Ages. He’s not really on Twitter.

By World Games17 hours ago0
IGN

By World Games17 hours ago0
IGN