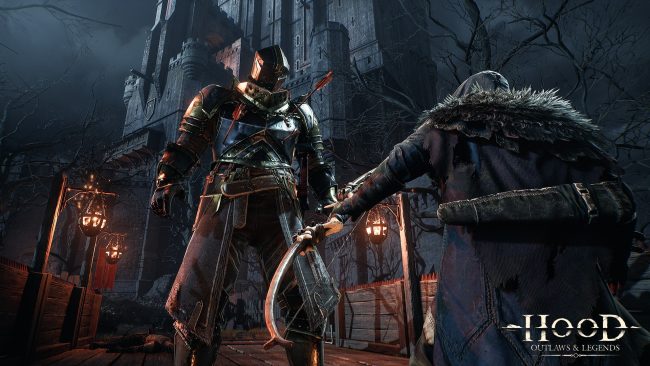 The story of Robin Hood is often told as a lighthearted tale of a cheerful knave who steals from the rich to provide to the poor. It’s been adapted as a cartoon featuring anthropomorphic animals, a comedy, and more recently a relatively family-friendly action epic. But Hood: Outlaws and Legends takes Robin and friends down a bit of a different and notably darker path. This PvEvP multiplayer game sees two teams of four bandits each vying to steal treasure from the state, while also trying to prevent the other from nabbing it themselves. It weaves between stealth and all-out action in an attempt to claim the treasure for yourself.

Hood: Outlaws and Legends released at an unfortunate point squarely between Resident Evil Village and Mass Effect Legendary Edition, two highly anticipated games garnering massive amounts of attention. As a new multiplayer-only IP, its facing an uphill battle to for both interest and players, and that’s reflected early on in matchmaking that takes a lot longer than it should for a newly released game. With no real single-player mode to speak of (besides jumping into the Training mode against AI opponents), Hood is at the mercy of its player base. Multiplayer games like Hood live and die by their communities. Cross play does help broaden the player pool, but interested players would be right to question if Hood will have legs in the long term.

The concept of each match is novel. A team must steal a key from the unkillable and monolithic Sherriff of Nottingham, locate and open the Vault, haul the treasure chest to an extraction point, and use a winch to extract the chest in multiple steps. You’ll do all of this while facing off against another team of four attempting the same thing, as well as numerous AI guards that patrol each map.

The general gameplay loop is quite fun, sneaking around and fending off both AI opponents and another team while out to steal the treasure for yourself. The unique objective-based gameplay takes a lot of focus away from strictly racking up kills, rewarding stealth, timing, position, and strategy more than simply trying to eliminate everything that moves. The four different character classes center each of their playstyles in different aspects, and they each play best when you are leaning heavily into their strengths. You want to stay in high and hidden vantage points as Robin. He’ll be slaughtered in hand-to-hand combat. You want to remain stealthy and invisible as Marianne. Have that desire to charge into the front? Pick John, who gets things done with his hammer, or Tooke, who is deadly with his mace.

While stealth is encouraged, having eight assorted human players on the map means someone somewhere tends to get seen pretty quickly, sending everything into lockdowns and alerts and generally devolving combat into clumsy melee skirmishes. Picking someone off with an arrow at a distance feels great, but running out of stamina while thwacking them for minimal damage is cumbersome. Stealth is one of the most fickle and notoriously frustrating mechanics in games. In this regard, I wish the stealth system felt a little more forgiving, perhaps offering more indicators for when you are about to be seen and from where. The dark gothic environments, while interesting settings for the most part, aren’t the best for signposting where enemies are or if they are going to be able to see you. This is one major aspect I hope gets a lot of balancing and tweaking now that the game is out.

Still, each match is this exciting frantic game of cat and mouse and cat, a back and forth of capturing points to gain more advantageous spawn positions and trying to out maneuver the other team while contending with the guards and the mountainous Sheriff who can eliminate you in one blow. Following each match, you’ll choose to divide your spoils between distributing them to the needy (leveling up your base) and keeping some for yourself (used to purchase the unlocks you get from leveling your base). It’s a great mechanic that really plays into that Robin Hood lore and keeps the loop going.

Hood works best when you’re playing with friends and people you know, or when you’re daring enough to hop into voice chat with randoms on the mic. Communication is key, and a team of organized players using voice chat has a distinct advantage over those who are just matchmaking solo without a headset. Proper use of the various classes—using Robin to take out targets from vantage points while John runs in for the treasure extraction, Marianne leaning on her stealth as Tooke flails with devastating melee attacks—creates an incredible flow of both combat and teamwork. But this kind of coordination only comes around every so often, and matches can feel radically imbalanced as already high-level players dominate the arena. This works great when they are on your team, not so much when you find yourself facing down their skills and knowledge.

Higher level players will have unlocked additional skills and abilities for their assorted characters, which means low level players are at a distinct disadvantage. Both in trying to learn the various nuances of Hood’s gameplay and in not having the top-tier skills unlocked it can put a lot of undue pressure on Hood newcomers that can just make it feel not that fun to play. The problem will only exacerbate the longer it’s out, so Hood needs to find a much better path to onboarding new players that doesn’t immediately throw them into matches with high-level gods and full teams of coordinated knaves.

The final extraction of the chest is also at odds with the two human-controlled teams. Instead of having to extract at their respective points in some kind of capture the flag mechanic, once a chest is set up for extraction at one point, that’s where both teams will try to take it. This means that whoever winches the final bar ultimately “wins” the match, even if the other team did all of the work to get it up to that point. It tends to encourage camping until the final moments of the match, wiping the enemy team, and then swooping in for the final extraction to earn the win. It feels less like a strategic tug-of-war and more like a game of who can be lucky enough to bet at the extraction point for the final bar during the enemy team’s respawn window. Not every match goes down this path, but enough do that I hope they rethink how to execute this final chase to get the loot and the win.

Fortunately, Hood: Outlaws and Legends already has an extensive roadmap of free content lined up for the first year. New maps, characters, modes, “major gameplay additions,” and seasonal community events will be heralded by future seasons in free content drops. Premium Battle Pass content will also let players chase and earn exclusive cosmetics. Extensive support will be imperative in seeing the game past its launch, and it’s great that Sumo Digital is already setting Hood up for the foreseeable future. Hood: Outlaws and Legends also knows what kind of game it is and is priced appropriately out of the gate, launching at $30 in an effort to attract players that a higher premium simply wouldn’t garner.

Presenting the lore of Robin Hood in a whole new way, there’s a really fun and unique game in Hood: Outlaws and Legends. While it has a number of balancing issues that can impact matchmaking in various ways, it’s all wonderful when it works. Hood is a game that frustrated me on numerous occasions, but was also one of the most thrilling and distinctive multiplayer stealth experiences since Assassin’s Creed’s multiplayer modes. With some long term love and care, Hood has a ton of potential to really stand out. Hopefully that means the growth of the community with it in order to establish the kind of healthy player base that a multiplayer title needs.

Report: Bethesda’s Starfield is Exclusive to Xbox and PC, Won’t Be Coming to PlayStation