When Hohokum creator Honeyslug split up in 2015, the three founders went their separate ways. Ricky Haggett went on to form Hollow Ponds and the new team has created two games together with Hohokum collaborator Richard Hogg. The first of those was puzzle title Wilmot’s Warehouse, finally released on PS4 earlier this year. The second, I Am Dead, has just been released on PS5 and PS4. Whereas this one is also supposed to be a puzzle game, it’s more like a hidden object game mixed with adventure.

Don’t get me wrong, it’s not like those free-to-play hidden object games that are ten-a-penny on mobile. There isn’t a long list of random useless objects to find. There is no need to repeatedly replay a scene to get enough points to move forward. Most importantly, the storyline isn’t relegated to thin strands that loosely thread everything together. Instead, the storyline is very much front and center and is tied to everything the game requires players to find, making this title more worthy of consideration.

I Am Dead Review – A Unique Community

Morris Lupton is a museum curator that lives in Shelmerston, a fictional island town off the coast of Cornwall. He loves long walks on the beach with his dog Sparky, watching the yoga enthusiasts at the lighthouse, and admiring the supposedly-dormant-but-smoking volcano. The problem is both he and his dog are both dead and their spirits have a huge task to do. The island’s Custodian is tiring and is unable to hold back the strength of the island spirit anymore. This spirit wants the volcano to erupt and destroy the island, so the duo needs to find a replacement Custodian to keep it at bay.

Shelmerston is no ordinary island. A race of fish folk live harmoniously with the humans. Artists made out of fruit, including a smoking pear, have arrived to open their latest exhibition. The lighthouse and yoga retreat is now run by a flower-loving robot. Smuggling the coveted alcoholic spirit Sheep Shank is a perfectly legitimate way of life alongside tourism. It isn’t the motley crew of living people where the Custodian will be found, though. The Custodian must be one of five deceased residents of the island. The only way to summon these spirits, known as Prospects, is to relive memories of people who knew them. 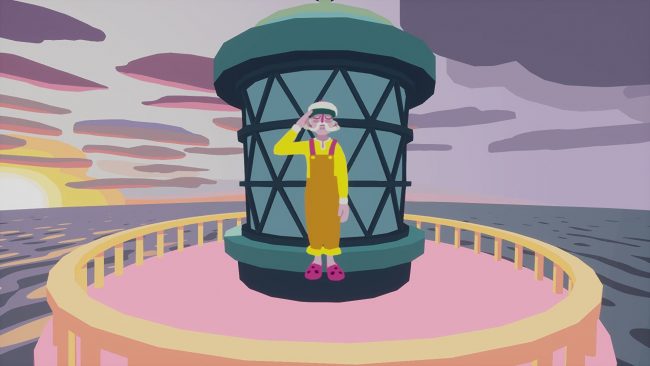 The memories play out in pleasant cutscenes presented like a cartoon strip where Morris must focus the picture to make the memory clearer. Once the memory has finished, the object to which the memory is tied must now be found. This sounds more complicated than it actually is, bearing in mind the object is always in the near vicinity of the person whose memory has just been read. Each Prospect is linked to five different objects, not all of which will just be lying out in the open. They might be hidden in cupboards or buildings, but instead of just opening the door and looking inside, the way to find them is more unique.

Morris has an ability known as slicing. This allows him to see through objects just like he’s taking a vertical slice sample. While slicing through a thermos flask might just reveal tea, slicing through a shoe might reveal a compass and map hidden in its sole. Not all objects can be sliced but there’s still more than enough to keep Morris hunting for a little while. Once all five objects are found, Sparky can round up the fragments of the person’s spirit and set up a meeting.

I Am Dead Review – A Short Story

Just going through the story will take around 2-3 hours as it’s incredibly simple. Each location is split into distinct smaller sections with clear indication of when there’s an object to find. Some players may entertain themselves by slicing through random objects, but this will likely get old fairly quickly. To get the most out of the game, there are plenty of optional secondary objectives to complete too.

Each location also has Grenkins, little creatures hidden within objects. They’re found when an object is sliced open at exactly the right angle to find the correct cross-section. When in one of these locations, Sparky will bark and reveal the cross section to be found. While finding the object and spinning it around to the correct angle is more challenging than the basic list presented through the story, the game is still incredibly forgiving. Precision is not a concern as the object will start spinning itself into its correct position when Morris gets remotely close to the solution. 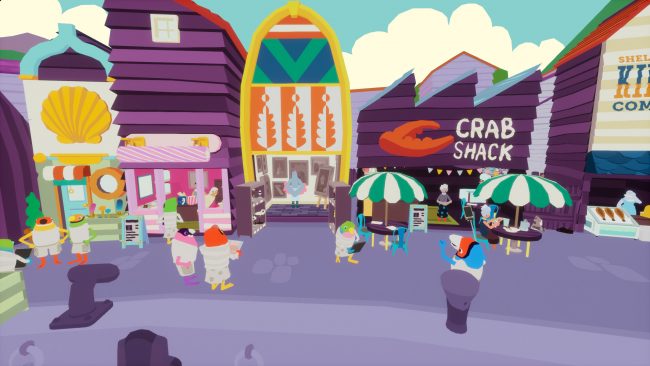 Another of the secondary objectives are Mr Whitstable’s riddles. This strange laughing creature hides a list of five riddles in each scene. Posing as something like a poster of yoga moves or a list of bands, these cryptic clues hint at objects hidden throughout each scene. If Morris gets the riddle wrong or time runs out, he can try it again without penalty aside from a withering look from Mr Whitstable. They’re the most enjoyable and challenging aspect of the game, and while I won’t spoil it, there’s an interesting and suitably weird reward for finding them all.

The final secondary objective is only revealed if you peruse the trophy list. Each area has a separate trophy for finding all of a certain object within a scene. Whether it’s fish-loving cats or stray plastic clogs, there’s at least five to find in each area. Like the Grenkins, the only reward for finding these are the trophies, but at least it’s a step closer to the Platinum.

I Am Dead Review – The Conclusion

I Am Dead is a hidden object game where players can get as much or as little out of it as they wish. Those following the story will find a short but simple game, perhaps too simple for some. The secondary objectives add more to do but seem like a compromise to keep adventure veterans entertained seeing as they carry very little reward. Away from the gameplay, I Am Dead dances around the raw emotions of death but deals with its impacts in a pleasant way. All living things must come to an end but memories can live on and have an impact on the future. Whether this game will be remembered in the future remains to be seen.

I Am Dead review code provided by publisher. For more information, please read our Review Policy.

The post I Am Dead Review – Slicing But Not Dicing (PS5) appeared first on PlayStation LifeStyle.

By World Games6 mins ago0