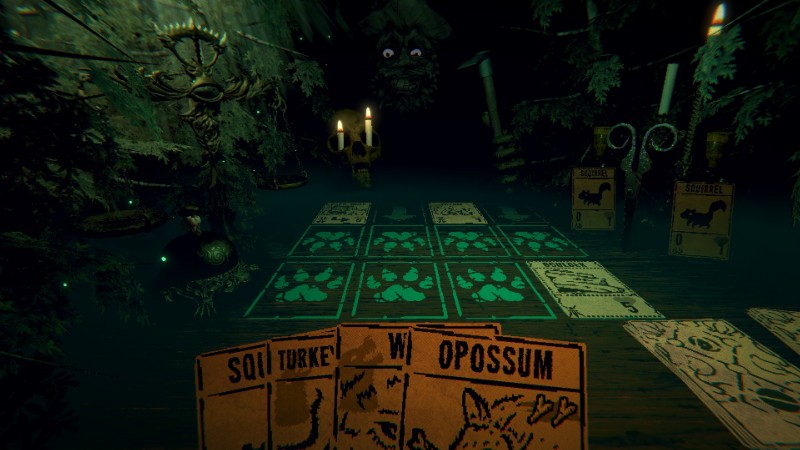 Rating: Not rated
Reviewed on: PC

You wake up in a dark cabin, chained to a worn table. A mysterious man sits on the other side of the room. You can’t see the details of his face through the darkness, but his crazed eyes pierce the shadows. Something under your belly lurches as he invites you to play a card game. The rules seem simple; you summon creatures to attack your opponent’s army of foes, and you easily win the first few hands. Still, you can’t shake the anxiety of what might happen if – no – when you lose. You play on, the eyes on the other side of the table slowly burning a hole in your stomach.

Inscryption is an incredible tone piece that taps into horror themes while telling an engaging and ever-evolving mystery. While those horror elements are important to the narrative, they are also just a backdrop to this adventure. I loved Inscryption’s moody atmosphere, but I also appreciate that it doesn’t force any jump scares on the player, making it a fairly approachable horror experience.

At the center of the adventure is a robust card combat system that has you summoning creatures into lanes on a battlefield. Your creatures deal damage to the critters on the opposite side of their lanes and, ultimately, directly to your opponent. The basic setup should be familiar to fans of games like Hearthstone and Magic: The Gathering, but Inscryption puts several fun twists on the formula that kept me coming back for more. For starters, some creatures require a sacrifice to enter battle. This means that when you want to summon a powerful creature like a bear, you’ll have to kill several beasts that you already put on the field. I liked the push/pull of trying to get your strongest creatures into the fray without thinning your ranks too much.

Inscryption’s deck-building system is also much deeper than it first appears. For example, some creatures can be summoned into battle only if you have a certain number of bones acquired through fallen allies. This allowed me to turn my defeats into victories; even if all my creatures were wiped from the board, I often felt like I had an ace up my sleeve or could tap into another strategy to turn the tide in my favor.

As you continue to take down opponents, you move along a gameboard and encounter random events à la titles like Slay The Spire. Some encounters give you new cards, buff existing cards, or grant additional tools to use in combat, such as a fan that allows your creatures to fly over their opponent’s heads. You also have the chance to affix sigils to your cards that offer unique powers, such as the ability to transform into stronger creatures over time or attack multiple lanes at once. These elements give Inscryption’s card system a unique flavor, and I loved experimenting with my deck to find new card synergies or create brand new cards that almost felt overpowered.

Between card battles, you can stand up from the table and explore your cabin. This space is full of locked drawers and other puzzle boxes. Solving these adventure-game-like mysteries earns you new cards and brings you one step closer to unraveling Inscryption’s larger mysteries. You eventually reach some startling revelations about who you are and why you’re trapped in this cabin, but the less I say about those revelations the better. However, Inscryption successfully flipped my expectations multiple times before the journey was over, and I couldn’t wait to see its satisfying narrative conclusion.

Inscryption is an oddity of the best order. It’s a horror game that isn’t aggressively trying to scare you. It’s also a clever card system wrapped around a compelling mystery that plays with video game conventions. Like a bat out of hell, Inscryption came out of nowhere and quickly became one of my favorite games of the year. 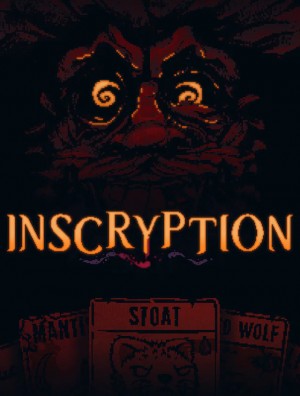 Summary: A horror-themed deck-building experience that evolves in unexpected ways the more you play.

Concept: A horror-themed deck-building experience that evolves in unexpected ways the more you play

Playability: The card system has clearly defined rules, so playing cards is simple. Building an overpowered deck is highly rewarding

Entertainment: The card combat is engaging, and the larger narrative elements make Inscryption incredibly hard to put down