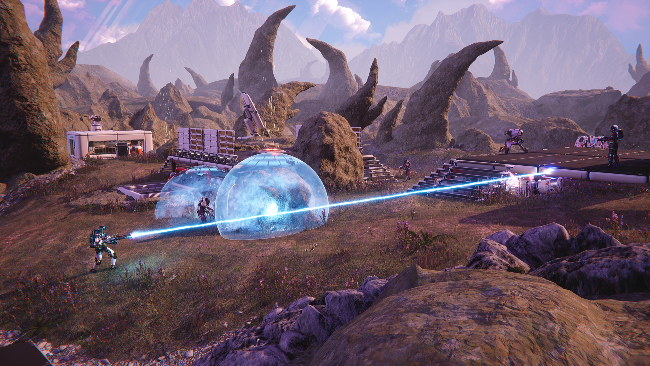 Sometimes the most brilliant moments of forward momentum in games come in the form of breaking out of the traditional genre mold, either evolving or blending genres—particularly unexpected ones—in fresh new ways. Lemnis Gate leans on this exact concept at its core, taking a first-person shooter and making it into a turn-based strategy game…? Yeah, it sounds like a really strange idea, but it’s one in practice that creates a whole new type of multiplayer experience that rewards both moment-to-moment shooter gameplay and passive round-based strategy elements. To get a better idea of just what Lemnis Gate is all about, we went hands-on for a couple of hours with its unique brand of shooter.

In Lemnis Gate, you and your opponent are not duking it out in realtime. Instead you’ll take turns in a cycling loop, each 25 seconds in length, trying to accomplish a certain goal. This may be an attack/defend scenario, where one side has to destroy generators as the other protects them, or a capture mission, where you have to retrieve resources and return them to your respective bases. Where in a normal first-person shooter you’d have to worry about the real-time actions of the other team, in Lemnis Gate, you have 25 seconds free to take actions all your own. It’s 1v1 (or 2v2 alternating or 2v2 simultaneous), so this isn’t massive teams of players on a battlefield. It’s just you, your opponent, and maybe a friend trying to strategize your every move.

Here’s an example of how a round might go down. I start the round with the goal of destroying a couple of generators. I select my character for that round—each of which have different weapons and abilities—and I have 25 seconds to make my move. In this case, I rush straight in and destroy one of the generators. If I have enough time left over, I run to the other and try to deal a bit of damage if I can. My 25 seconds are up, the turn recorded, and the loop restarts.

My opponent, who has been watching these moves, takes their turn. They decide to hit me early on, killing my first character before they can destroy the objective. Suddenly the loop looks very different. The objective is no longer destroyed. It’s my turn again, where I select another character and add to the loop. I can either attempt to kill their character that had killed me, freeing up my first character to destroy the generator, or I can just try and do some additional damage to a different generator with this character. With just five turns on each side, some of these decisions—which character to choose to play, and what actions to take with them—can and will be the difference between victory and defeat.

Lemnis Gate is admittedly a bit confusing to grasp at first (not to mention remote cloud gameplay of a first person shooter adds just a hair of lag). The first couple of matches were pure chaos, and by the ninth and tenth turns, devolved into pits of madness of just running to the action and chasing kills to try to “undo” the actions of the previous turn. And with friendly fire on—yes, you can hurt and be hurt by your previous loop characters—I initially questioned the balance of the rounds. Playing this like I would a traditional shooter, even a hero-shooter, wasn’t giving me the desired results.

However, as the matches went on, I began to pick up on some clever little tricks, planning out moves multiple turns in advance. Perhaps instead of immediately “undoing” that kill from the second round, I’d wait a few rounds. Divide and conquer. Maybe I could use on character to pour acid all over a commonly used chokepoint or doorway to either block it off or set a trap. I could choose a sniper and snipe a lane that I knew an opponent was coming down. Maybe I’d pick the fast character who could dash to get them across the map and stop my opponent early.

I began playing things a little bit more like chess, knowing that sacrifices could ultimately bait my opponent and result in a victory. There were always multiple strategies I could employ, and even if all hope seemed lost, pulling off a key move in the final few rounds could drastically change everything. After all, Lemnis Gate isn’t about the number of kills you get or the characters you have left alive at the end. It’s simply about accomplishing your objective, whatever that may be for the game mode you are playing. And you continue to record the full 25 seconds so that no matter which deaths are “undone,” you can play the entire thing out.

We got to go hands on with all of the game types, including the 2v2 modes that are both about alternating turns back and forth for all four players and letting you take two turns simultaneously together. For these modes, communication with your teammate was key as you tried to set up forward-looking strategies to ensure the victory. Of course it can still get chaotic; “even the best laid plans” and all that; but that feeling when a plan paid off, either intentionally or completely by accident, was thrilling. Seeing the whole 25-second match play out in its finality at the end is a fun exercise, and one which can further highlight the mistakes you made, what paid off, and how you can better strategize for the next match.

It’s tough to get the gist of how Lemnis Gate will play out in the long term with a short demo session, but its possibilities seem vast once it’s in the hands of the public. Players will have to learn the assortment of characters and their abilities, as well as each stage’s level design, to get a good sense for how to best play the objective, counter the opposing team, and ultimately plan strategies that will secure them them victory. Still, it’s an incredibly unique concept, and one I’m eager to see carried by the players once it releases in August.

Kena: Bridge of Spirits Delayed to September to Allow the Team Time to Polish the Game

Hundreds of Ubisoft Employees Sign Letter of Support for Activision Blizzard Walkout, Demanding Accountability From Their Own Company