Project Moon’s Library of Ruina had its official release a few days ago, hitting Xbox Series X/S and Xbox One via Xbox Game Pass and Steam. The Game Pass release is probably the best thing that could have ever happened to this gem, ensuring some degree of visibility. While the legions of fans that examined the game during its early access period could have told you it’s awesome, discoverability is always incredibly important for indies. Library of Ruina features enthralling enemies, enchanting music, progressively more complicated mechanics and options, and a really dark, weird tale that ebbs into everything else about it. This journey into the bizarre is refreshing, revitalizing, and reinvigorating. Still interested? Let’s go.

Library of Ruina is a sequel to another Project Moon game, Lobotomy Corporation, which you also may not have heard of. In Lobotomy Corporation, you manage a facility similar to the one from The Cabin in The Woods in a simulation experience that often goes horribly, horribly wrong. In the Library, however, you play as librarians holding receptions for guests. These receptions are elaborate turn-based battles that include both cards and dice, so they’re pretty badass if you want to get nerdy. There have been many comparisons of Library of Ruina to other deckbuilding fares like Slay the Spire and Monster Train, and while these are excellent games to be in the company of, it’s important to stress that Library of Ruina is a completely different beast. While it shares critical deckbuilding elements, it’s not a roguelike and plays more like a traditional RPG with a ton of options and elements that unlock over time, choices for you to make, and builds to explore. But I will say this – Library of Ruina is definitely a game you should play if you like the aforementioned titles.

Guests that you defeat can be turned into pages and books, which boils down to cards and character templates. Put in an easy-to-understand fashion, you can take on the core aspects of foes you beat, sort of like character skins after you acquire their book. If I beat a cool swordsman who excels at slash damage and has unique sword skills, I could equip his book on a character and have access to all those associated skills. If I feel like swapping, I can toss another book on at any time. Instead of featuring a level-up system, Library of Ruina opts to challenge players by drip-feeding new book options as you unlock progressively more difficult level tiers. While this starts quite simple, you can eventually even put books inside books to make a core character with tons of passives from multiple personas and a tailored deck to match. And we’re just getting started. 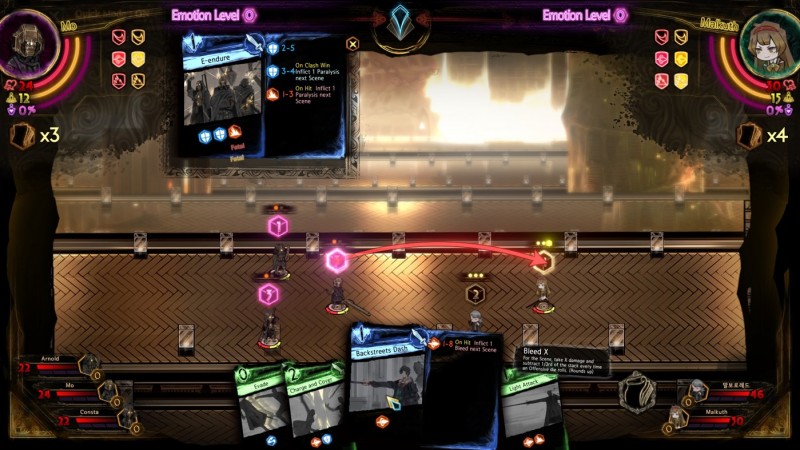 You can take as many as five characters into battle at once as you get later into the game, and you can construct a unified vision or a crew that can handle multiple situations. Maybe the best call against a giant single target is to stack burning cards and dish out damage over time. Maybe you want to shatter opponents before they can even attack with blazing ranged attacks. Or build charges, play cards that get better if your deck is single copies only, or many, many other strategies. You take on numerous boss battles shaped more like puzzles than the normal fights you encounter along the deckbuilding journey. These start off fairly easy but get much more challenging, forcing you to think about every incoming attack or to play in different ways, like giving you targets to protect, avoid, or manage during the course of a demanding battle.

Defeating bosses ties into yet another mechanic (yes, this game is absolutely fantastic for lovers of systems and mechanics) where your emotional level builds up over battles and gives you access to incredibly powerful effects that often come with risk/reward aspects to play around with. There’s a ton of other factors to consider in combat in terms of speed, counterattacks, and more, but honestly, these things are best to discover as you play through. 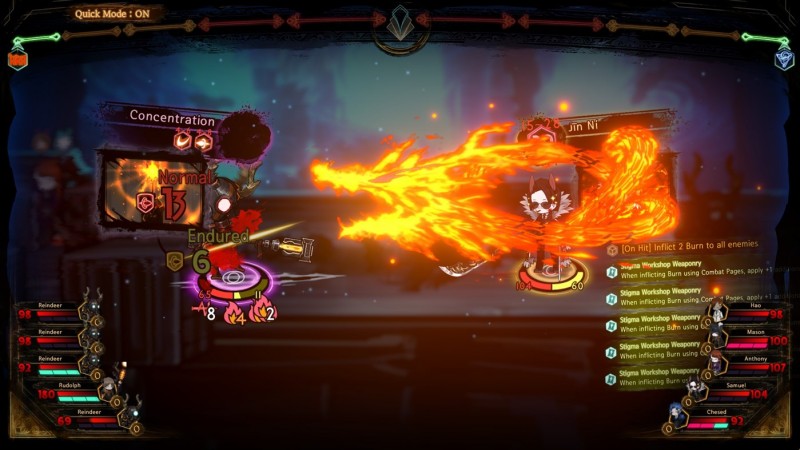 The world of Ruina is incredibly dark, disturbing, and weird. I say this in the best possible way. While the game earns its Mature rating and is definitely not for kids, the trappings of Ruina are absolutely enthralling, from the moving backgrounds to the incredible soundtrack. Boss battles in this game can be jaw-dropping and surprising. Chances are, you’ll be checking out the soundtrack when you’re not playing as well. It features some incredible tracks by Mili, whose talents you may have heard earlier this year in Ender Lilies: Quietus of the Knights. Screenshots don’t do the game justice, and watching battles play out remains mesmerizing hours and hours into the experience.

That said, the game does not do a great job of onboarding players in its initial hours. There are many systems in play, and the opening may not successfully relay all the various things going on to the player. It can seem quite confusing at first; I was quite a few hours into the game before I started to understand how certain abilities worked. Early on, it can be daunting just to figure out how to use pages to get to the next area or start a random encounter. Stick with it. After a bit of time, things eventually start to fall into place, and you’ll be swapping books across your teams in seconds. But it does require that learning process from the player before it achieves immersion, so count on a slower start before the hype train leaves the station.

There’s a ton to discover, explore, and experiment with in Library of Ruina. If you like card games, turn-based RPGs, deckbuilders, or just cool games, check it out!