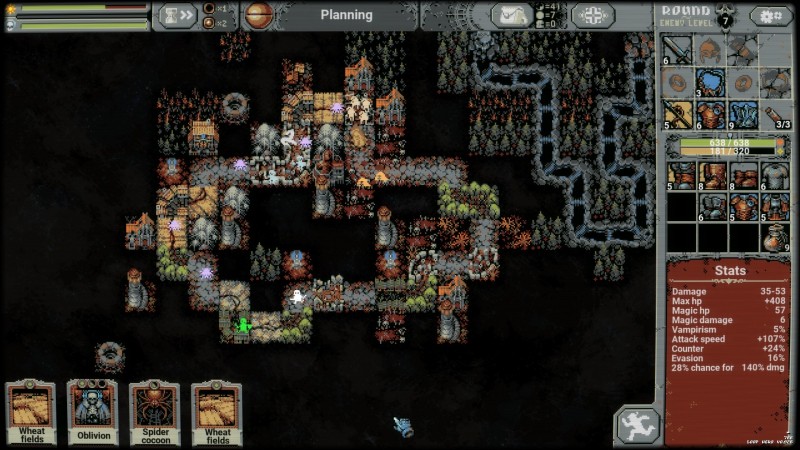 Loop Hero has found its way into the homes of over 500,000 players in its first week of launch. The time-looping roguelite meets dungeon builder has garnered a ton of positive buzz since coming out of Early Access earlier this month

To celebrate the milestone, players can grab a set of shiny new Steam cards made in collaboration with artist Bard-the-Zombie. Developer Four Quarters also announced on the game’s Steam page that some quality-of-life improvements are on the way, such as:

The team promises future content will also include new cards, transformations, and classes. The already great soundtrack will be bolstered with new music as well.

Loop Hero launched on March 4 after spending time in Early Access to positive reviews from players. It’s a unique game in that the protagonist automatically moves forward while it’s the player’s job to place elements such as terrain, villages to collect quests, and even enemies in the hero’s path. You have no direct control of the character, who will auto-attack any obstacle in front of him. The idea is to create a world that will challenge your hero as much as possible without actually killing them – as best as you can manage at least. As you strategically place obstacles for your hero to conquer, the more rewards, like gear and experience, you earn. The path itself is a never-ending loop, and the path resets itself, so to speak, with each new cycle.

It’s a strange idea to wrap your head around but a highly inventive one. In his review of the game, Game Informer’s own Dan Tack summed up the experience by stating “Loop Hero is a creative and clever little game that should be on your radar if you enjoy strategy, RPGs, deckbuilders, roguelikes, or all of the above. While its novelty begins to wither the further you get away from your opening hours, the journey is worthwhile and engaging.” You can read the full review here for a full idea of what Loop Hero entails, or watch us play it in this episode of New Gameplay Today.

Have you taken the plunge into Loop Hero and if so, what do you think of it so far? If you haven’t given the game a try, are you planning to? Let us know down in the comments.