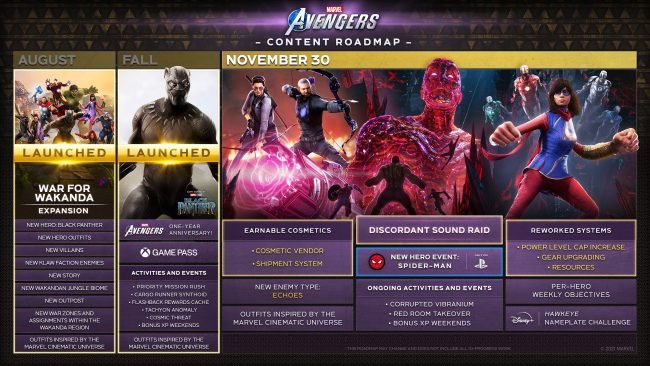 We’ve known for more than a year that Spider-Man would eventually be coming to Marvel’s Avengers, exclusively for PlayStation players, and now the webslinger finally has a release date. Starting November 30th, PlayStation players can take part in the “Spider-Man: With Great Power Hero Event” which will let you “experience Spider-Man’s story through unlockable challenges woven throughout the Avengers Initiative.”

Peter Parker uncovers AIM’s new plan to acquire technology that could make their Synthoid army unstoppable and total domination inevitable. He must partner with the Avengers to stop this looming threat, and forms a tentative friendship with Ms. Marvel and Black Widow while keeping his identity hidden. As a Hero accustomed to working solo, he struggles with the new dynamics of working with a team. Will he join up full time with the Avengers, or stay independent in his fight against AIM?

At this point, there aren’t any additional details about Spider-Man or how he’ll play—or even images of what he looks like in the game—but Crystal Dynamics promises more reveals throughout the month via blogs, social posts, and livestreams.

Spider-Man isn’t the only thing coming in the November 30th Marvel’s Avengers update though. It will also mark the launch of the new Klaw Raid: Discordant Sound, which requires a top-tier squad of four players to take on. With a power-level increase from 150 to 175, the Klaw Raid will be the only way to get the game’s best gear.

There are a few other quality of life changes on the way too. Gear upgrading will allow you to recycle higher powered gear, bringing up lower power gear to match it. Shipments will be a new feature allowing players to earn cosmetics, resources, and other items via gameplay. And the update will also make weekly objectives hero based, rather than account based. It will begin with the Adaptoid Mission Chain and new Klaw Raid, but they are working to make the “hero-bound system” apply to other activities, as well as having it active on future events and additions.

All of this comes shortly after Square Enix made comments alleging that Crystal Dynamics may not have been the right studio for the “disappointing” Marvel’s Avengers, suggesting that Crystal Dynamics didn’t have the right attributes and experience to tackle a games-as-a-service (GaaS) title. Square Enix doesn’t, however, question its own decision to push for Marvel’s Avengers to be a GaaS, despite the near universal praise for the single-player adventure that was Guardians of the Galaxy—which ironically also came from Square Enix.

PlayStation players can expect to start playing as the web-slinging Spider-Man in Marvel’s Avengers on November 30th.

20 Minutes of Elden Ring Gameplay Shows Off the Vast World of the Lands Between, Special Editions Revealed

The Next Battlefield Game Might Be Some Sort of a Hero Shooter, According to New Report