Mass Effect holds a special place in the gaming zeitgeist. It’s this big enormous beloved series with just as many frustrations levied at it for a variety of reasons. After all, that which is most beloved also becomes the most criticized. Mass Effect Legendary Edition is less full remake and more a “recapture,” that’s to say it’s attempting to recapture what it was like to play these epic RPGs when they each first released a decade ago. As such, they can at times feel their age—even with all of its improvements, the first Mass Effect still feels like a game that came out of 2007. Granted, the series was well ahead of its time in 2007, but be prepared for a number of elements that date the game.

However, that’s part of its charm, and essential for going into Mass Effect as a series. Anything less, or any bigger changes, and you’d start to change what Mass Effect means on a bigger level. Understanding what this large grumbly beast of a series actually is is critical to enjoyment of it. Yes, Mass Effect 1 languishes in loads of spoken exposition via dialog trees, and the “skip dialog” dialog button is the same as that for selecting a dialog option, which can make fast readers select options they don’t want to. But I’ll be damned if I wasn’t poking around every corner and talking to everyone I could at every opportunity. I spent significantly more time dabbling in local planetary gossip and intergalactic politics than I did shooting things.

Mass Effect 2 was the first Mass Effect game to come to PlayStation consoles. I missed the first game entirely, even when it finally came to PlayStation later. I’d heard horror stories of its dated design and had no desire to go back after already playing through both 2 and 3. The Legendary Edition was my first experience with the once-Xbox-exclusive title, and the improvements made by BioWare definitely make it feel much more at home within the larger scope of the trilogy. As mentioned, it still feels like a game from 2007, but I don’t know that I’d want it to feel completely modern. The Legendary Edition holds Mass Effect as this time capsule of gaming. For all of its visual enhancements and other small tweaks across the trilogy, this is Mass Effect as I remember it, and I appreciated the opportunity to experience the opening chapter that I had missed. 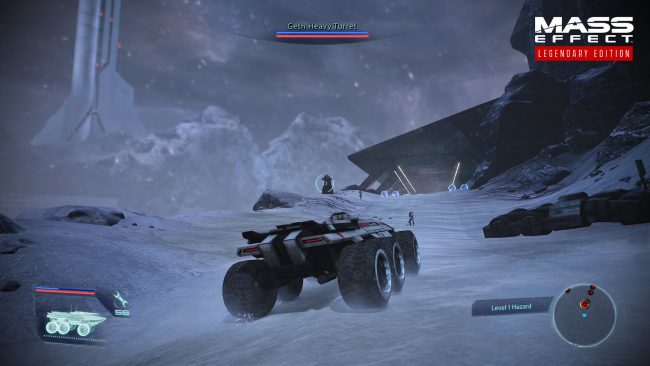 As mentioned, however, Mass Effect 1 does still feel like a game out of 2007, and I shudder to think that at one time it was worse. BioWare smoothed out the bumps, but they didn’t change any fundamentals. While it retains the integrity of the original release, some of it is going to come as a shock to anyone expecting a fresher feeling experience. Controls can at times feel janky and stiff. The inventory and equipment system is an absolute pain. Fortunately the Mako, which I had only heard horror stories of before, feels mostly fine. I did manage to get it stuck a couple of times, but I think that was my own terrible driving more than issues with the Mako itself. For all its warts, it’s worth persisting, however. Mass Effect has some incredible story moments and lore (even if most of it is delivered via slow-paced conversations) and the next two games do a lot to improve on things like controls and environmental detail and variety.

The brunt of the work on Legendary Edition went into smoothing over the bigger pain points in Mass Effect 1, but that’s not to say BioWare phoned in Mass Effect 2 and 3. Both games look absolutely stunning with higher levels of fidelity and detail, and other small tweaks that were intended to preserve the original intention of the experience as opposed to drastically changing anything. One of the most notable is altering the previous gratuitous angles that highlighted Miranda’s butt during moments when we were meant to focus more on the emotions. It’s a small tweak that helps present her character arc in a much better way. 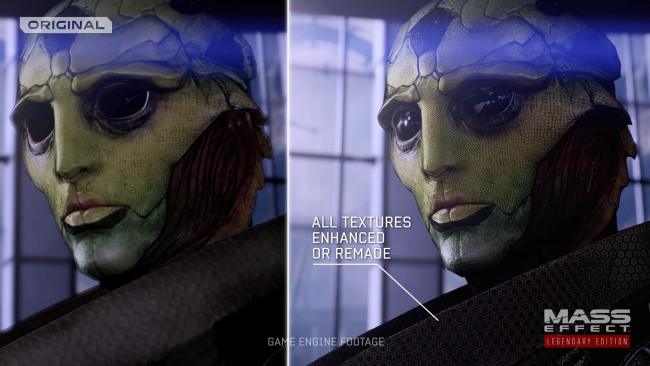 Starting up Mass Effect 2 was where the nostalgia really kicked in for me. Because I’d never played the first game, I was left simply nodding along for most of the game. It was cool to get to experience choices I had previously only made via the pre-game story recap, like freeing the Rachni queen and making that choice between Ashely and Kaiden on Virmire. But it was the second game brought memories of the PS3 release flooding back. Likewise, Mass Effect 3’s opening moments had me in tears again. “Leaving Earth” has a permanent spot in my Spotify library. You know, for when I really need to feel epically sad. The way the Mass Effect series upped the stakes throughout really made the suite of decisions all the more difficult to make. Sometimes it’s the small intimate decisions, and others, the fates of entire alien races are in your hands.

These leads to a wider conversation around the previous controversy surrounding Mass Effect 3’s ending, which boiled down to three main choices. One of the biggest things I appreciate about the Legendary Edition is the ability to take a step back from the expectorations we had back when Mass Effect 3 first released. The argument that your choices don’t impact the end of the trilogy miss the entire point. All three games together as one allows you to see how your decisions affect the whole journey. Characters will live or die. Alliances will be forged or broken. Sure, it doesn’t play much into that ultimate ending choice, but the state of the world surrounding that final choice is drastically different, as was the journey to get there. As someone who loved the ending to LOST, understand that I love the focus on the journey here, the 100+ hours leading up to the ending. (And to be clear, while I played as much as I could, I’ve only completely finished Mass Effect 1 from the Legendary Edition. I played around 20 hours of 2 and 3 to reach a fair comparison point on the original releases.)

Including (almost) all of the DLC and expansions from each of the games really makes this collection feel complete. They are more or less seamlessly integrated into their respective game’s campaigns, which makes these already huge games feel even more expansive. If there’s one minor complaint here, it’s perhaps just how too well these are implemented. The DLC stories were meant to be experienced at specific junctures in the story, and taking them on too early or too late can potentially disrupt the flow. For example, doing the Citadel DLC too early will ensure that you miss a ton of character interactions. It’s certainly not game breaking, but I would have liked some better signposting on these. 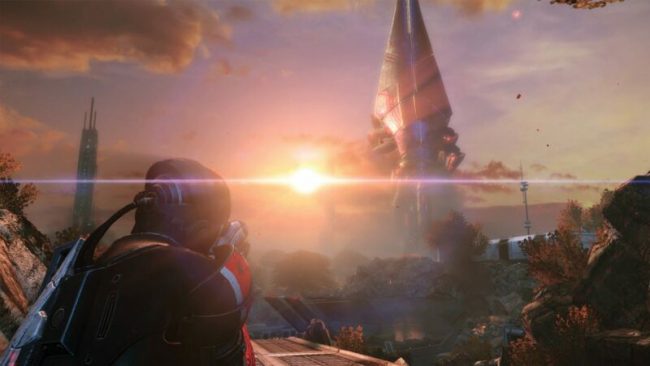 The glaring omission from the Legendary Edition is Mass Effect 3’s multiplayer. While it’s certainly missed—it was quite a fun an innovative game mode—not including it makes the whole experience feel a bit tighter. Legendary Edition feels like it’s meant to be this static collection that anyone can experience at any time. Including the multiplayer—and how it played into the galactic readiness in your main campaign—would have put a ticking clock on the player base and servers. In that respect, I can appreciate Legendary Edition being a closed entirely offline package.

For better or worse, Mass Effect Legendary Edition is effectively the same classic trilogy we played a decade ago, warts and all. BioWare finely balanced updating the games with leaving elements that would recapture that classic nostalgia of first taking off across the stars in the Normandy. For my experience, this was the perfect way to bring the classic trilogy to modern audiences while preparing everyone for more Mass Effect to come. We’ll get our proper new-gen Mass Effect soon enough, but right now, this is where players should experience where it all began with Commander Shepard’s epic three-game saga. Whether you’re an eager fan looking to return or a curious new player who wants to see what all the fuss is about, this is Mass Effect.

Pixelopus Working on a PS5 Game in Collaboration With Sony Pictures Animation, Developed on Unreal Engine 5