What’s really weird is seeing Microsoft’s name in the startup sequence to MechWarrior 5. You see, the house that Gates built bought up the license to all BattleTech games, which is what the MechWarrior series of games are based on. Much like with the recent acquisition of ZeniMax, however, Microsoft isn’t hell-bent on only publishing exclusives for their Xbox platforms. Hence, we have the first MechWarrior game to land on a PlayStation console in over 20 years. Pricing is also something of an anomaly: the base game is $29.99 USD, and the two currently available expansions are $19.99 apiece. A DropShip edition costs $59.99 and includes both expansion packs for $10 less than what you’d pay buying everything separately. All editions of the game receive a large year one update, and any co-op hosts that own the first DLC can invite owners of the base game in to experience the entirety of that DLC’s campaign content. This can save gamers on a tighter budget a bit of extra money, which is appreciated.

The PS5 version of MechWarrior 5 naturally benefits from simply being on the newest PlayStation console. The hyper-fast SSD ensures levels load within a handful of seconds, for example. While the DualSense controller is used, it is done so sparingly. The speaker is unused, despite the player receiving radio transmissions quite often during missions. Adaptive triggers are also only used at specific moments during combat, but not when firing weapons which would have made a lot of sense. Vibration is also only used for energy weapons and, strangely, whenever the pause menu is brought up.

HDR is not supported and there are no graphics settings to mess with to prioritize either resolution or performance. The Unreal Engine 4 attempts to keep the action running at 60 frames per second, but seems to struggle when things get more intense. Things never become choppy, but the frame rate takes obvious hits at times. Cross-platform play is enabled by default, and co-op is available for other online players to join a campaign in progress. However, the host player must have enough Mechs in their arsenal, otherwise extra players join in as spectators and cannot assist in the fight. 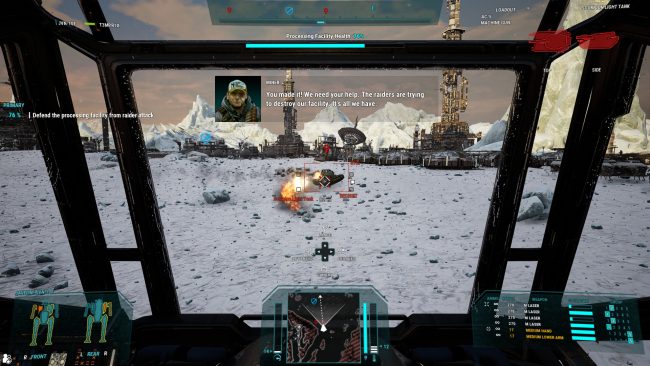 Combat in MechWarrior 5 is kind of like a tank simulator, but with many more options. Mechs are basically walking tanks but much larger, so this makes sense. Movement is performed with the analog sticks, however the torso of each Mech rotates independently of the legs, much like the turret of a tank behaves. This can easily become disorienting for those who are unaccustomed to such a control scheme, but an on-screen display helps to visualize how your Mech is currently oriented. The shoulder buttons fire four weapon groups, while L3 fires the fifth which activates melee attacks, a first for the franchise. The cross button can cause Mechs equipped with jump jets to, well, jump, while the directional pad allows the player to do many actions ranging from directing teammates to changing the camera and even shutting the current Mech down. Battles take place in real-time, across decently-sized battlefields.

Some new biomes such as megacities allow for lots of destruction. Indeed, except for especially large skyscrapers, most every building, vehicle, tree, or other object on a map can be demolished. It’s fun to use cities as target practice, but as kinetic weapons have limited ammo, using energy weapons or simply running over obstacles has the same effect and is just as fun. MechWarrior 5 basically lets you live out your childhood dream of smashing cities to bits, without having to worry about setting things up, fire damage, or cleanup.

There are a couple of single-player campaigns to play through now in MechWarrior 5. The original story sees players taking control of Commander Mason just as he is forced to assume leadership of a band of MechWarrior mercenaries called Nik’s Cavaliers. The story is quite campy, and one character in particular is quite clearly voiced by Elias Toufexas; a.k.a. Adam Jensen in the recent Deus Ex games. One unintentionally hilarious thing I noticed is that nearly everyone you help on missions wears a baseball cap. The first time I saw this was on a younger female character, which reminded me of Clementine from The Walking Dead. But everyone else who needed my help was wearing such a cap!

Hats or no, once the player manages to clear the first chapter, the galactic map opens up and they are free to move from system to system, provided enough money is available. Nothing is free, of course, from maintaining, repairing, and outfitting Mechs, to hiring and keeping pilots that accompany you out on missions. Each mission offers a chance for the player to negotiate for extra cash upon mission success, extra shares for claiming salvaged parts and even whole Mechs after the mission concludes, insurance for damages incurred, and even airstrikes to call in during battle.

Between missions, the player can head to their console to read up on the latest in-game news, forward time to whenever the next event is, or other options depending upon the resources available in the current solar system, such as hiring mercenaries or visiting a cantina. This menu-driven portion of MechWarrior 5 almost feels like Elite Dangerous, though of course without the trade economy.

Ultimately, if you love Mech games, then not only do you not have many options, but MechWarrior 5 is among the best of them. There are a handful of lengthy single-player options available, and cross-platform co-op should help friends join in more easily. After more than 20 years off PlayStation consoles, it almost feels like developer Piranha Games is making up for lost time with all this content.

MechWarrior 5: Mercenaries is a lot of fun for fans of the BattleTech franchise. It may not be the flashiest game around, and its story can be very campy at times. But this is pretty much your best bet for playing a ‘Mech game on a PlayStation console. If you have (online) friends, co-op will likely provide some extra thrills, and the generous DLC support is great to see. It may be a bit rough around the edges, but MechWarrior 5 is more than welcome on PlayStation after all this time.