There’s a rumor flying around that Call of Duty: Vanguard is going to clock in at a staggering 270 GB, but that’s not true. Further investigation shows that the actual size of Call of Duty Vanguard is likely to be closer to 95 GB (though, of course, this far from the November 5th release date, nothing is set in stone yet).

The initial reports of the massive file size came from a Microsoft Store listing for the Call of Duty: Vanguard preorder. The page has the “approximate file size” listed as 270.05 GB. 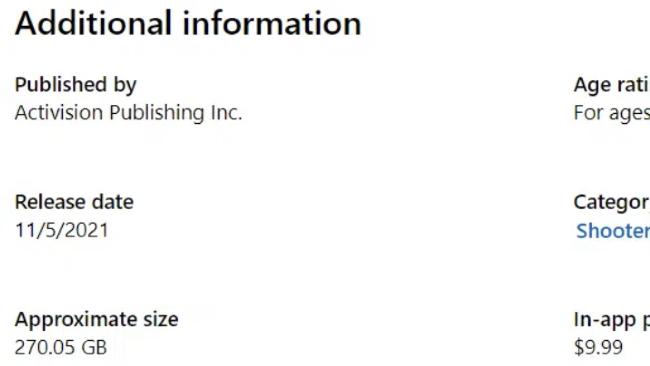 If we head over to the page for just the Xbox Series X|S version of Call of Duty: Vanguard, it lists the file size as a much more manageable 95 GB. The Xbox One version comes in ever smaller at 75 GB. Additionally, if we do some quick math based on the bundle, then we can infer that the beta will likely be around 50 GB (may vary depending on platform and final official details). The listing for the beta files on the Microsoft Store also confirms this.

The PlayStation Store doesn’t list any file sizes for Call of Duty: Vanguard yet, but we can assume they will probably be similar.

While 95 GB may still seem like a massive game, it’s quite a bit smaller than recent Call of Duty games have been. In fact, between full installs of Black Ops Cold War and Warzone, they reached a point where the two games couldn’t even receive an update on a 500GB PS4 due to how large each had become. They also dominated more than half of the usable space on a PS5 SSD. The estimated file size for Vanguard seems to show that the development teams have been working on streamlining the file sizes to not completely take over your storage space.

Call of Duty: Vanguard was unveiled today via an event in Warzone that has players working together to take down an armored train. We got the inside story from Sledgehammer about Vanguard, including how the studio is working to make sure that its culture is inclusive, equal, and safe for all of its employees, particularly following the California lawsuit and allegations of toxic culture at Activision Blizzard.

The post No, Call of Duty Vanguard isn’t Going to be 270 GB, in Fact, It’s Less Than 100 appeared first on PlayStation LifeStyle.