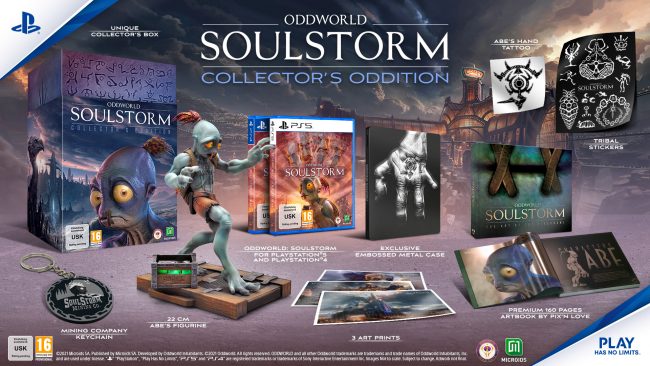 Oddworld: Soulstorm may well be arriving digitally on PlayStation 4 and PS5 next month, but the retail versions of the game won’t be arriving until three months later in July. Publisher Microids has revealed they’ll come in two flavors — Day One Oddition and the Collector Oddition — and anybody who pre-orders them at select retailers will get a couple of digital pre-order bonuses too.

The Collector’s Oddition, available for both PS4 and PS5, will include the game and the following goodies:

Meanwhile, the Day One Oddition will come with the embossed collectible metal case. Anybody who pre-orders either edition at select retailers will get digital codes for the Oddworld: Soulstorm Original Video Game Soundtrack and a Digital Oddworld Artbook by Pix’n Love Editions.

Oddworld: Soulstorm follows on from the events of Oddworld: New ‘N’ Tasty and is a reimagining of the PlayStation title  Oddworld: Abe’s Exoddus. Considered by Oddworld Inhabitants Creative Director Lorne Lanning to be the true second title in the quintology, the game has a story that diverges away from the original title as well as several new gameplay features. The franchise has moved into 2.9D environments, while Abe has acquired the ability to loot items from bodies and the environment. The things he finds can be used to craft items for himself or his 1000 fellow Mudokans that he’ll rescue throughout the game. A new camera system will also be “capable of reflecting the scale of Abe against his epic journey“.

The retail Odditions won’t be available until July 6, but the digital version of the game will launch on PS4 and PS5 on April 6. PlayStation 5 players can grab the game for free as part of the PlayStation Plus Instant Games Collection, continuing the promise Sony made to carry on adding day one releases to the program.

The post Oddworld: Soulstorm Day One and Collector’s Odditions Available at Select Retailers in July appeared first on PlayStation LifeStyle.

Back 4 Blood Delayed Until October, Open Beta Coming This Summer

Unique Isometric Sci-Fi Adventure, Beautiful Desolation, Headed to PS4 and Switch in May

Change History as a Time Traveler in Wanderer, Headed to PS VR in Q3 2021

PS5 Fastest-Selling Console in US History, Miles Morales Outsold Ghost of Tsushima and TLOU2 in the Country