During the announcement of Destiny 2’s upcoming Season of the Splicer, fans weren’t enamored by the Tron-inspired Vex network, the return of the Vault of Glass Raid, or The Last City getting plunged into eternal night. No, they were taken by a glimpse of baby Fallen—affectionately referred to as “Smallen” by the community. Wasting no time, Bungie revealed official Baby Fallen Plushies made in partnership with Numskull Designs.

Measuring about 10 inches, the Baby Fallen Plush appears to feature glowing eyes, according to the product pictures. However, Bungie notes that development of the plushies is still in progress and details are subject to change. It’s unclear if the glowing eyes are simply glow in the dark or some other fancier light-up mechanic. The listing says that shipping ETA is expected before the end of 2021, but no release date or price have been given yet. Currently you can sign up for email updates on the Bungie Store to be notified when they go up for preorder.

The love for Baby Fallen has been quite the ride, considering Bungie’s official unveiling of them has consisted of a very small glimpse of them in the corner of the new Season’s key art:

SEASON OF THE FALLEN BABIES pic.twitter.com/YxYJfASC7G

And a very, very brief snippet of them in the trailer—a scene that lasted less than a second and players ended up having to brighten to even see them properly. 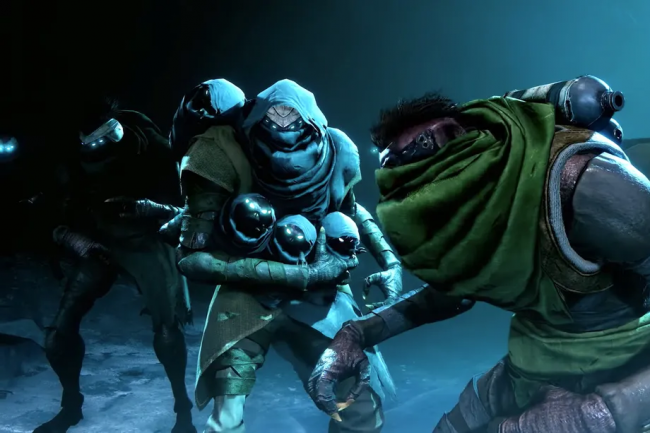 But, of course, this is the Destiny community, who will pore over every trailer frame-by-frame to find things like the return of an obscure armor piece from the original Destiny. In this case, that frame-by-frame analysis revealed these Fallen Babies. At first these was even some debate over what they were. Little swaddled grenades, perhaps? However, within less than a day, it was confirmed that they were indeed “smallen,” and fan art of the swaddled babes came from every corner of the community.

It’s not quite clear if Bungie made some quick moves and decided to develop and Baby Fallen Plush after the community’s love for them came out, or if they’d already had this planned and ready to go ahead of time, foreseeing that everyone would fall for the tiny Eliksni. Either way, it’s another unique product thanks to Numskull Designs, who keeps tallying wins as it makes official merchandise for fans that you won’t get anywhere else.

While you wait for the Baby Fallen Plushies to releases, check out the rest of Numskull’s Destiny merchandise, including statues of The Drifter and the Exo Stranger, and a whole lot of unique apparel and items officially licensed by Bungie.

The question with the Baby Fallen Plush is not if you’ll get one, but rather, how many will you get?

PlayStation Plus February 2022 Games Include UFC 4 and Planet Coaster

Blizzard Entertainment Is Making a Survival Game for Console and PC