OMNO is a passion project for developer Jonas Manke. He single-handedly created his Journey-inspired puzzle platformer over the course of five years. While he previously has game experience animating characters for State of Decay 2, his first title has headed in a completely different direction as players set off on a gentle journey of discovery rather than a harrowing journey of survival.

Having arrived through a strange portal of light, a mysterious character known as a staff bearer finds himself in a strange fantasy world abandoned by humans during the Great Departure.  There is no explanation for why he is there, but there is only one way forward through the swamp. The linear path teaches the basics of jumping, all why trying not to drown. There are very few consequences for making a mistake; every death results in respawning at a checkpoint mere feet away from his demise and he has unlimited lives. The emphasis is exploration without being hampered by fear of failure.

His journey takes him through numerous beautiful low-poly environments, from sunny, parched deserts to lush, colourful tundras. There’s even a brief foray into the clouds. All of this is accompanied by a calming soundtrack composed by award-winning composer Benedict Nichols (The Falconeer, Before We Leave), the only other person to contribute any work to this game. Its gentle melodies blend into the background and are a fitting accompaniment for gentle exploration.

Throughout he will find peculiar flora, fauna, and ruined constructions, all of which are fuelled by light. There are smaller creatures such as Freglets, two-legged frogs with glowing eyes. Then there are the Legendary Animals, like the giant turtle called the Maroola that transports the staff bearer through the swamp to the next destination on his journey. None of the 40 creatures throughout the game are any threat, rather all of them will be of some help whether it’s merely guiding you along the way or releasing their light so the way forward can be unlocked. 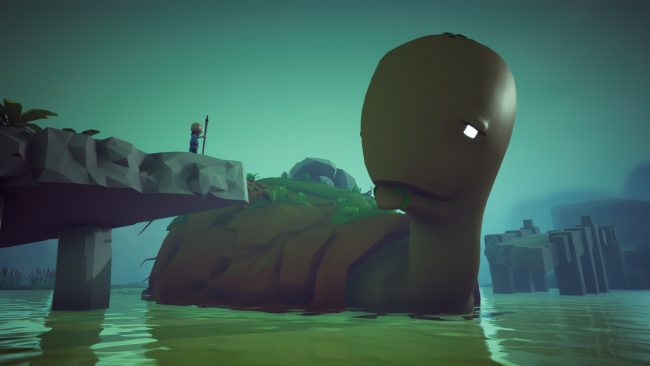 Exploration is all the more important when reaching larger open areas. The only way forward is by completing an ancient puzzle that reveals the level’s exit. This can only be unlocked by collecting three light orbs from those scattered around the area. Some can be reached through platforming, while others will only become reachable once a puzzle is solved. The puzzles are simple and diverse, never feeling repetitive. The game leaves players to work things out on their own, but this means it’s easy to overthink a solution. A rotating pressure pad puzzle involved paper and a pen until I realised I wasn’t paying attention to the environment and there was a far easier method of solving it. Puzzles can be tried over and over again without penalty until the right solution is found.

The most challenging aspect of the game is the platforming sections. Falling into the abyss does result in death but only for long enough to respawn at a convenient checkpoint nearby. Falling from height is accompanied by a fairly amusing splat as the staff bearer hits the ground like Wile E. Coyote who has once again been thwarted by Roadrunner. A small number of nuggets of light scatter around like gold rings escaping from Sonic the Hedgehog. Unlike Sonic, the staff bearer has an unlimited amount of time to collect his light nuggets again and continue on his way.

OMNO Review – Using Skills to the Best of Your Ability

Some of the platforming challenges rely upon the skills of the nearby creatures to help out, but most are dictated by the skills the staff bearer learns along the way, like the ability to teleport or dash in midair. While fun, the skills aren’t always completely reliable and it’s the only source of frustration with the game. Sometimes he can dash in a random direction that isn’t his direction of travel or the way the camera is pointing. The staff bearer can only teleport to highlighted icons of light; moving around to find golden spot so the destination is highlighted is irritating.

As well as light orbs and creatures scattered around each area, there are also glyphs that give the only story beats in the game. They tell of the fate of the staff bearer’s ancestors, and explain why he is following the trail of light through the new world towards the Gate of Light. Finding the glyphs isn’t necessary for completing the game, but they do help to make sense of the game’s ending and are worth seeking out for those looking for a meaning to their journey. 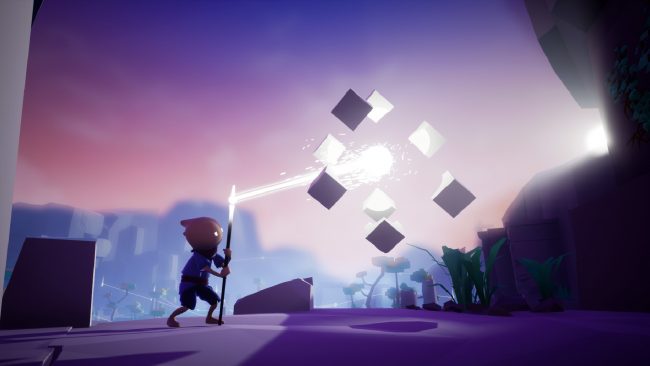 While only three light orbs are needed to leave each area, there are more to find. Players can complete each area by collecting all of the orbs, and finding all of the glyphs and undiscovered creatures. Each area has a portal that allows the staff bearer to survey the area. His light map will then show the area’s percentage completion and all of the light orbs still to be found but will not show the glyphs and animals. As the staff bearer leaves each area, the game gives a warning to make sure players really want to leave the area before it is completed. Once left behind, there is no turning back. Chapter select will let players replay areas Afterwards but will overwrite the single save file the game allocates.

Finding everything an area has to offer is satisfying but can get repetitive. Each area follows the same ground rules with the majority of items to be found around its edges. With not much else to see beyond the collectibles, the ten worlds can also feel much of a muchness despite their different environments. Those not wanting to go for 100% will complete the campaign within 4-5 hours, with those looking for a completion taking maybe a couple of hours longer

OMNO is a game worth experiencing despite its minor faults, especially as it’s a great testament to what can be created by a single person. There’s no need for a complicated storyline, just simple puzzles and platforming to create a satisfying experience. The gratification comes from working things out on your own and making your own way to the Gate of Light through a journey that never become too difficult or frustrating.

The post OMNO Review – Follow the Path of Light Into the Unknown (PS4) appeared first on PlayStation LifeStyle.