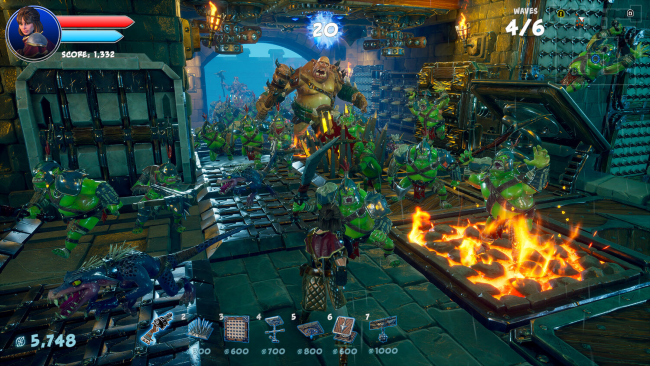 After a year-long exclusivity on Google Stadia, Orcs Must Die! 3 has finally made its way onto other platforms. In fact, in many ways we have Stadia to thank for Orcs Must Die! 3 even existing, nearly 10 years after the last numbered entry in the series was released. I absolutely loved 2017’s Orcs Must Die! Unchained, a free-to-play multiplayer take on the series unique realtime tower defense formula, but it was the cause for some financial trouble for Robot Entertainment after it flopped commercially. After getting back on their feet with the Stadia deal, I was thrilled to hear that Orcs Must Die! 3 was finally headed to consoles.

This review is based on the PlayStation 4 version of the game. A native PS5 version is coming at a later date, though it’s not quite clear what updates it will have. Presumably it won’t feature different content, but will focus on performance and visuals. We’ll update this review with any significant differences once the next-gen version is live. PS4 owners of the game will get the PS5 version of Orcs Must Die! 3 free. You can also play the PS4 version on PS5 right now through backwards compatibility.

Orcs Must Die! 3 is a tower defense third-person action game hybrid. One or two players use points to set up assorted traps along a set of predetermined paths to prevent waves of orcs and other enemies from reaching your rift. Lose all your rift points, and you fail. But even if your traps aren’t doing enough to take all of the enemies out, you can jump into the fray yourself with assorted weapons, cleaning up any stragglers that aren’t impaled on spikes or flung into the abyss.

Things kick off rather simply: a couple of doors that funnel into a single path towards your rift. You can use spike traps on the floor and arrow traps on the walls to create kill boxes. The puzzle here begins with do you try to take out enemies at each doorway early on, or let them funnel to a single path dangerously close to your rift? Can you afford to split your defenses, or should you risk one getting through at the last second?

There’s a fun sense of progression as you unlock and upgrade new traps and use them to go back and conquer older levels. There’s a hilarious feeling of failure as what you thought was an airtight defense is met with an unexpected twist or two that makes everything fall apart (don’t rely solely on barricades to funnel enemies one way if you aren’t accounting for the barricade busters, trust me).

Like any good tower defense, there’s something of a puzzle element to the whole thing. Different enemy units require different strategies to take on. Barricades and fire attacks may work very well in one level, but in another, you might run into a few barricade busters and enemies who are immune to fire damage. Do you spend skulls to upgrade existing traps or buy a new suite of orc-killing implements? Decrease the cooldown on that spike trap may be good, but the acid geyser is looking like a pretty fun option too…

And then there’s the fact that you don’t just set everything up and hope your defenses do the trick. You get to be an active participant in the battle. You can continue to lay traps as you earn points or use your own weapons and various items to ensure that the orcs that must die are indeed dying. You can adapt on the fly to account for hiccups within any grand plan. Rebuild a downed barricade or add an arrow trap to that pathway you didn’t realize was open before. Some of the later levels are quite labyrinthine, and call for on-the-fly adaptation as initial builds often don’t do the trick the first time you take one of these on.

However, with all of this in mind, the one thing I wish Orcs Must Die! 3 did better is communicate its broad assortment of enemy creatures, traps, status effects, and other nuances in a better and more unified way, to better assist with the feeling that you really are solving a puzzle on each level. If one of the special upgrades unlocks arcane damage and the other electric, I want to know what arcane and electric damage types do, respectively. I don’t want to have to go hunting for that information. I want to be able to make informed decisions about the traps I’m buying and upgrading right from the purchase and upgrade screen.

Yet Orcs Must Die! 3 remains rather vague on everything, making you question what effects and traps are really worth investing in. I want to know specific cooldown times and exact durations of status effects and other similar numbers and stats, not just the ambiguous promise of a “faster cooldown” for spending skulls to upgrade the trap. This leads to some traps that seem like they might be cool being frustratingly ineffective against some enemy types, or perhaps sometimes not even understanding what they are doing at all, particularly within the fray of countless enemies charging your rift. After a year on Stadia, I’m surprised this quality of life enhancement hasn’t happened yet.

And you can only customize your loadout once you are in a game, but before the first wave kicks off, which has caused me to forget to change it on more than one occasion. While being in the game itself fending off waves and waves of orcs is extremely fun and engaging, managing Orcs Must Die! 3’s cumbersome menus is something of a chore that becomes a bit of a road bump on the path to enjoyment. It’s some of the same criticisms I had around Unchained, which was that the game very much felt like its interface and user experience were not optimized for a console player. For better and worse, Orcs Must Die! 3 is built upon the foundations of the series, both in its excellent gameplay and its obtuse menus and methods of delivering information to the player.

Orcs Must Die! 3 can be played in a variety of modes, from the two campaigns, to Endless, and even the new Scramble mode that adds positive and negative modifiers over the course of a few levels to contend with. Skulls earned across any modes allow you to upgrade your loadout anywhere else, so if you find yourself stuck somewhere, you can play another mode to earn some skulls and upgrade or buy key traps. Everything can be played in co-op too, which is honestly the preferred method to me. It’s much more fun to have a friend with you to help split your attention and address any weaknesses within your defense, and becomes a hilarious festival of laughter once your foolproof plans ultimately break down. Unfortunately, co-op is online only for now. You and your friend will each have to have your own consoles to play together.

One of the highlights throughout all the modes is the War Scenarios—larger levels that throw even more waves of enemies at you. To compensate, you get bigger War Machine traps like a whole unit of archers, giant flip traps, or an explosive barrel launcher that you can man yourself. These huge levels always throw a fun twist into the usual smaller scale stages and allow for different strategies and gameplay styles that break up the pacing every few levels that you play.

As far as co-op games go, into doesn’t get much more frantic or fun than Orcs Must Die! 3. It’s at time unintuitive and feels like it’s missing a few key quality of life features that could really help smooth out the experience, but at its core, the simple trap-building orc-killing gameplay loop is addictively engaging, far outshining any issues it may have at the menu level, particularly if you have a co-op partner to go through it all with. There aren’t many shining examples of “active” tower defense games, but Orcs Must Die! 3 absolutely exemplifies what’s so great about the genre and series, even if it stumbles a bit on its way to get there.

Black Adam won’t be R, but may still be unlike any DC comic book movie yet

Sony Has an ‘Interesting, Exciting, Fantastic’ List of Ideas for Future PS5 Updates