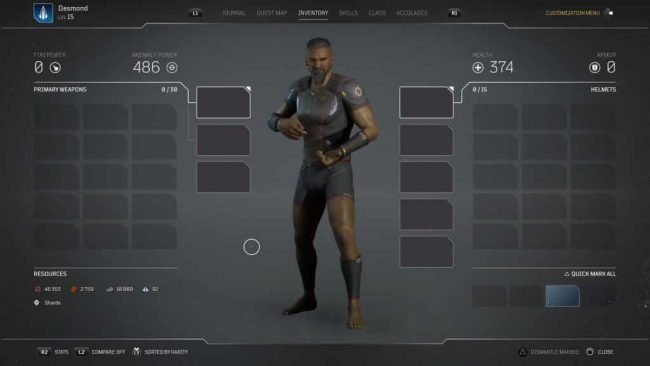 While Outriders is a really fun game, some players have been apprehensive about putting too much time into it thanks to a random inventory wipe bug that would completely delete all items in your inventory. The latest patch from developer People Can Fly fixes the Outriders inventory wipe bug so you can continue playing without worry. News of restoration efforts for lost items will come soon as they keep an eye on this fix and ensure the issue is completely resolved.

The inventory wipe issue occurred when players would log back into the game and find their character standing on the character selection screen without any gear equipped. While it’s been a problem since launch, affecting all levels of players on all platforms, the bug showed up more frequently following a patch a week ago. Players became either hesitant to play at all, or put the game down after they had lost their gear.

People Can Fly notes that the recent fix, live now on all platforms, should completely resolve the inventory wipe issues. They’ll continue monitoring over the weekend and looking for player feedback to see if any edge cases come up, but they are confident they have found and fixed the issue. They want to make sure the fix fully works before moving forward with the process of restoring people’s lost inventories where they can.

There are a few known quirks with this new patch that they want players to be aware of:

If you’ve been hit by the inventory wipe bug, the restoration process will come separately. This patch is simply preventing the issue from occurring for anyone else. People Can Fly are looking at ways to improve their restoration process in order to get players back into the game. Currently it is only set to restore Epic and Legendary items. Any blues you lost are mostly likely gone forever, unless something changes before they start restoring inventories. It will be additive and not replace any newly acquired items since encountering the inventory wipe. Their stats may also be different.

If your character is facing a “Couldn’t Connect to Server” message, your inventory will be returned and you’ll be able to log in again following the restoration. When the restoration does happen, it will be in the server database side and won’t require players to download a patch.

Outriders has had a rough couple of weeks since launching, most notably facing server issues that prevented people from playing, in addition to this inventory wipe bug. This latest patch shows a continued effort from People Can Fly to support Outriders and makes sure players are enjoying their time with it. As a thank you to early players, People Can Fly will be putting together a community appreciation package that will grant new gear to anyone who played within the first week or so.

Have you run into the Outriders inventory wipe issue, or were you holding off on playing the game until it was fixed. Journey through the anomaly below to reach the comments and let us know.

Ghostrunner 2 Will Head to PlayStation 5, Xbox Series X/S, and PC Thanks to a Deal Between 505 Games and One More Level