After playing roughly 30 hours of Outriders on PS5, I’ve hit the level cap with my main character and rolled credits on its campaign. Server issues in the first few days delayed that a bit, and there’s a hefty chunk of post-credits content before I reach the final final boss, but I wanted to give you my thoughts on its main campaign now instead of sitting on it until next week. So far, Outriders definitely delivers great sci-fi and superpower-focused action, some cool world design, and a pretty satisfying loot grind. But its occasionally clunky interface, some nasty persistent bugs, and messy story make it seem less like a big-budget science-fiction epic and more like a guilty pleasure Sy-Fy Channel™ original series.

That’s not necessarily a bad thing, of course – sure, SyFy might be responsible for Defiance and Hunters, but it also gave us modern classics like Battlestar Galactica and… The Expanse is pretty good, too! (It had to be saved from cancelation by Amazon, but that’s beside the point!) Outriders would definitely fall somewhere in between those extremes if it were a TV show – its story makes decent use of its recognizable sci-fi tropes for when deep-space colonization goes wrong, but the script often takes its grim/dark self too seriously.

A lot of the voice acting falls flat – particularly for the leads, who mostly just dutifully grunt their way through accepting quests – and the script careens back and forth between being so hardboiled that it borders on camp, to downright cringe-worthy takes on the ugliness of humankind. While there are a few moments throughout that could have evoked some believable empathy, they’re all undermined as a result. That said, the overarching story and unexpectedly hostile alien world is interesting enough to keep things moving, and there are some genuinely intriguing twists as it progresses, even if (without getting into spoiler territory) their payoffs are somewhat underwhelming.

[poilib element=”quoteBox” parameters=”excerpt=I%20genuinely%20can%E2%80%99t%20remember%20the%20last%20game%20that%20could%20make%20me%20cackle%20as%20hard.”]Outriders is at its best when you’re blasting your way through hordes of bad guys with a couple of friends. Gunfights are frenzied affairs that leave battlefields literally coated with blood, and there’s something morbidly hilarious about seeing a whole-ass ribcage rolling through a skirmish like a bony tumbleweed – and that borderline cartoonish, over-the-top violence is really accentuated in multiplayer. Each of the four classes has strengths, weaknesses, and skill sets familiar to class-based action games – except for the fact that here they’re all primarily focused on dealing damage (of the 32 unlockable class skills in Outriders, only two have healing abilities). Still, each compliments the others in more interesting ways than something like the standard healer would. I genuinely can’t remember the last game that could make me cackle as hard as when my earth-bending Devastator combos a Gravity Leap with a Trickster’s Stasis Bubble, creating a slow-mo fountain of bad guy chunks.

That uniform focus on damage output may be a turn-off for anybody who really loves to play a capital-S Support class, but the fact that any class can competently reduce the opposition to a sticky red paste allows everybody to safely go it alone if they want. However, I will reiterate that it is far more enjoyable to gun down hordes of monsters and space bandits with friends.

[poilib element=”quoteBox” parameters=”excerpt=Outriders%20trots%20out%20some%20really%20cool%20monsters%20and%20environments.”]The human enemies you’ll face are fairly limited, ranging from run-of-the-mill rifleman to rushing berserkers and the occasional superpowered minibosses (that get decidedly more powerful towards the endgame), but they provide enough tactical variety to demand some quick thinking and strategy. Of course, we’re not alone: As you explore more of the planet’s interesting and diverse wilderness, Outriders trots out some really cool monsters and environments, with interesting takes on snowy mountains, dense jungles, and beyond. The second half of the campaign is a bit too focused on desert landscapes, but the creature designs there are some of Outriders’ best.

From the variations on fodder-level mutants to the larger beasts that look like somehow even grosser and meaner takes on something out of Half-Life or Alien, the encounters designed around them are a fun alternative to the endless rain of bullets you find against human enemies. What’s unfortunate is that, despite solid combat encounter designs, the more traditional boss battles are some of the least engaging fights Outriders has to offer. Sure, that five-story-tall Street Shark monster looks awesome, but the whole “shoot the big thing outside the arena and avoid being smashed by its big hand” concept feels a little played out.

[poilib element=”quoteBox” parameters=”excerpt=Outriders%20doesn%E2%80%99t%20revolutionize%20the%20loot%20grind%2C%20but%20it%20offers%20some%20great-looking%20options.”]When it comes to the stuff that falls out when you kill those guys, Outriders doesn’t exactly revolutionize the loot grind, but it at least offers some great-looking options. Notable inclusions like the “double gun” – which is basically just two assault rifles welded together – or Legendary-tier weapons (most of which look like they’re carved out of some monster’s ribcage) give the otherwise mostly standard assortment of weapons some flavor – not to mention what are easily my favorite video game shotguns since Doom.

But the real good stuff comes as you find and build better gear, and here Outriders makes some smart adjustments to the traditional looter-shooter formula. Its World Tiers, which are Outriders’ 15 difficulty levels, are a good workaround for insurmountable challenge spikes that might discourage you in other co-op loot grinds, and its crafting options offer a wide range of character builds.

A Note on Microtransactions

Good news on this front – there aren’t any!
The development team at People Can Fly has been very adamant that Outriders is not a live-service game, and as such won’t feature microtransactions of any kind. “The bad things that are sometimes connected to games as a service, like loot boxes or any pay to win mechanics, we are against them,” says Creative Director Bartosz Kmita. “So we’re not using them at all in our game.”

The news may be that there is no news, but we thought it would be good to let you know that you don’t need to worry about seeing any content locked behind a paywall here.

That said, for every smart twist, there’s also a frustrating drawback. I really appreciate how the crafting system simplifies the process of modding your gear compared to other loot-heavy adventures, and the variety of easy-to-swap mods offers a lot of flexibility to adjust your build.

[poilib element=”quoteBox” parameters=”excerpt=For%20every%20smart%20twist%2C%20there%E2%80%99s%20also%20a%20frustrating%20drawback.”]Basic armor mods, for example, provide buffs to your active abilities. You might boost the damage of your Trickster’s Temporal Blade, or make it so your Devastator can turn two bad guys into shish kebabs at once. Higher-level gear lets you add higher-tier mods to your library – rather than having to craft each mod individually – as well as gear with multiple slots. That allows you to do things like take a gun that explodes frozen enemies into icy shrapnel for AOE damage and add cryo rounds so that it freezes them and blows them up in one go, or pair a gun that regenerates your health on every kill with an armor mod that gives you bonus damage whenever you heal.

What’s frustrating is that, because loot grinds are designed to encourage incremental progress, I was routinely changing up my gear loadout, meaning I constantly had to return to base camp to fiddle with my mod loadout. You can’t do that on the go, and the crafting UI is not great. Outriders is far from the only game to have this issue, but it’s still frustrating to constantly bounce back and forth between the crafting menu and your inventory screen for lack of a decent sort/compare function – especially when you have to talk to an NPC every single time you want to open the crafting menu. A similar problem exists for its “fast” travel system, where you have to make your way back to a campsite, then fast-travel back to your main campsite, to then talk to an NPC, and then fast-travel to a new quest hub.

[poilib element=”quoteBox” parameters=”excerpt=Man%2C%20making%20that%20jump%20from%20Tier%20six%20to%20Tier%20seven%20took%20forever.”]This can be especially irksome when you run into progress choke points, usually at the start of a new World Tier. Finding better gear requires playing on the highest available World Tier, and the catch is that you lose Tier XP (which is separate from your character level) every time you die. So, you have to either play tediously slowly if you’re constantly optimizing your build or lower the World Tier at the cost of loot quality. This does eventually become less of an issue as you’re regularly getting Epic or better gear – for me it was around World Tier seven and eight – but, man, making that jump from Tier six to Tier seven took forever.

Outriders also has its fair share of technical issues – and I’m not talking about the server problems in the first week or bizarre idiosyncrasies like cutscenes for opening doors or poor balance between dialogue and background audio (though those aren’t great, either). No, I’m talking about how crashes are pretty frequent, especially when playing co-op, and cross-play matchmaking currently seems fruitless. Worse, you might lose all of your weapons and gear forever if there’s a crash right after you experience a relatively common bug that empties your inventory.

There are also a litany of minor bugs, from enemies occasionally being able to hit you behind cover to characters becoming translucent in cutscenes. There’s nastier stuff too, including environmental glitches like doors opening and then closing again, barring progress (the only reason I was able to complete one side quest was that I was playing as a Trickster and could teleport into the next room behind an enemy). To the credit of the developer, People Can Fly has been very transparent about how it’s addressing all these issues, and that is reassuring, but still… yikes.

If We Had to Score It Now…

When everything’s running smoothly, Outriders has wickedly fun combat, interesting world and creature design, and a broad set of cool powers and customizable gear going for it – especially when you’re playing with friends, so it’s definitely worth putting up with some of the clunky interfaces, and lackluster sci-fi story. However, the current technical issues – particularly that nasty inventory-deleting bug – make investing the hours required to see all of its colorfully bizarre sci-fi world has to offer a big risk. 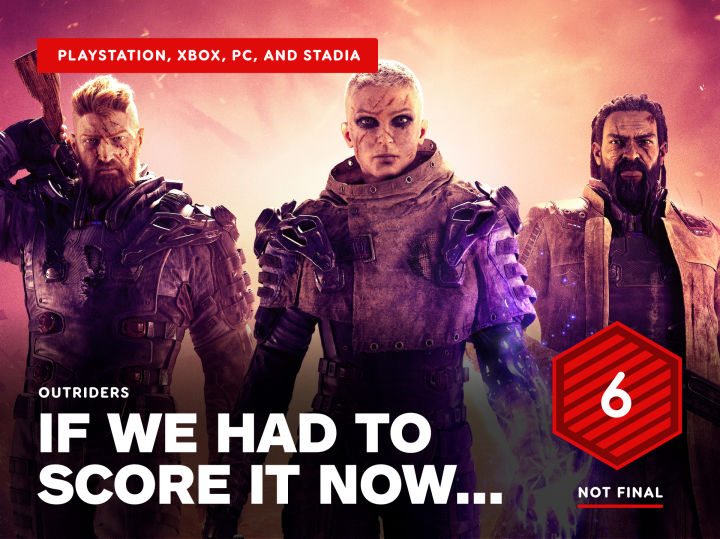 We’ll have a final review next week once I’ve made it through the endgame, but in the meantime let us know what you think of Outriders in the comments.

The Last of Us Part 2, Tell Me Why Tie for Outstanding Video Game at GLAAD Media Awards

Resident Evil Village: How to Find and Complete the Necklace With Two Holes