Thanks to the continuing effects of the coronavirus pandemic, a virtual version of QuakeCon began today. They decided to launch the event with a surprise announcement. An “updated and visually enhanced” PlayStation 4 edition of Quake has been released on the PlayStation Store, available to purchase now. A physical edition will be released through Limited Run Games next week, while a native PlayStation 5 version is coming soon.

Players step into the shoes of a Ranger who must take on corrupted knights, ogres, and a whole variety of other creatures as he searches for the magic runes that will give him the power to take down the ancient evil threatening humanity. Quake on PS4 comes with the original campaign and the two original expansions, The Scourge of Armagon and Dissolution of Eternity. Developer MachineGames has also added their own Dimension of the Past expansion previously released on Steam for the game’s 20th anniversary, and there’s a brand new Dimension of the Machine expansion created for this version of the game:

In the deepest depths of the labyrinth lies the core of lava and steel known only as The Machine. Crusade across time and space against the forces of evil to bring together the lost runes, power the dormant machine, and open the portal hiding the greatest threat to all known worlds—destroy it…before it destroys us all.

In addition to all of that content, a variety of “free, curated, fan-made and official mods and missions” are available. These include Quake 64. More mods and missions will be released at a later date. The “dark fantasy” first-person shooter’s graphics have also received an overhaul for the new PS4 edition with support for up to 4K on PS4 Pro and widescreen resolution. The team at MachineGames has added enhanced models, dynamic and colored lighting, anti-aliasing, and depth of field. The campaign and expansions can all be played in local split-screen co-op or online co-op for up to four players. Dedicated servers will allow up to eight players in online matches while peer-to-peer support can be used for custom matches. Crossplay is available for PS4, Xbox One, Nintendo Switch, and PC.

Quake is available now on the PlayStation Store for $9.99. This PS4 version of the game can be played on PS5 through backwards compatibility although there will be a native upgrade “coming soon” that will be available for free for those who purchase the PS4 version. Alternatively, Limited Run Games has three different physical editions whose pre-orders begin on August 27. The standard edition comes with a full color manual and is priced at $29.99. The Deluxe Edition includes the full color manual, Official G2 Blu-ray sized Quake SteelBook, 18×24 Double Sided Poster, Metal Quake Logo Keychain, Commemorative Metal Coin, and Deluxe PC-style Big Box. This is priced at $79.99. 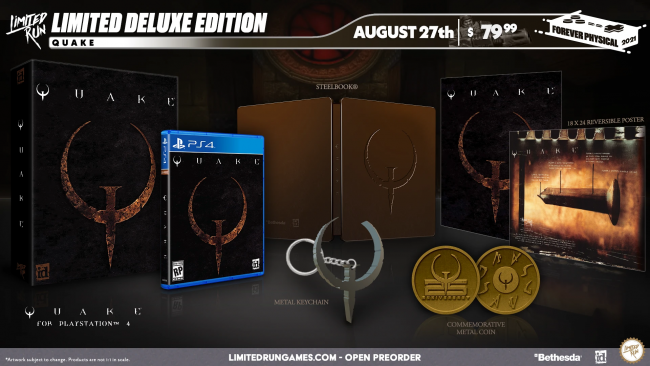 According to a Tweet from the company, there will also be an Ultimate Edition although this is not on their website at the time of writing. The Ultimate Edition will include all of the contents of the Deluxe Edition as well as a Nail Gun Ammo Outer Box, Motorized Rotating Quake Quad Damage Replica Statue, Enamel Pin, Ring of Shadows, Quake Logo T-Shirt, 3″ Metal Shambler Figure, and a Numbered Certificate of Authenticity. It will be priced at $129.99. 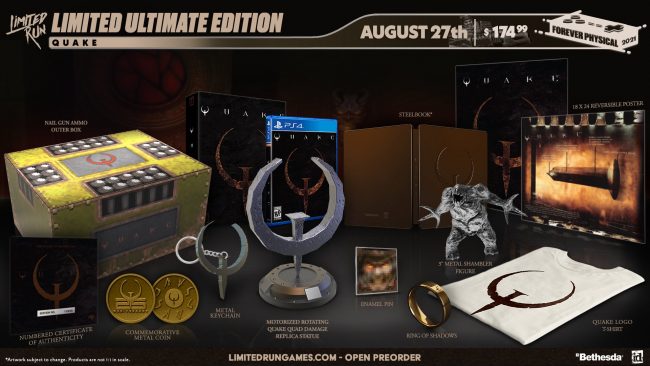 All of the physical editions of Quake will be available for pre-order on August 27.