0
Ratchet & Clank: Rift Apart is set to release exclusively for PlayStation 5 on June 11. Like its predecessor, Rift Apart is a third-person shooter developed by Insomniac Games, featuring lots of whacky weaponry. It’s also meant to showcase many of the PS5’s flagship features. You can preorder a copy for yourself right now (see it at Amazon, or Amazon UK).

You can go with the standard edition or, if you want some downloadable extras, pick up digital deluxe edition. Below, you’ll find full details on what comes in each edition, as well as what preorder bonuses you can expect. Let’s get to it.

The standard edition of Ratchet & Clank: Rift Apart comes with the game and the preorder bonus described below. 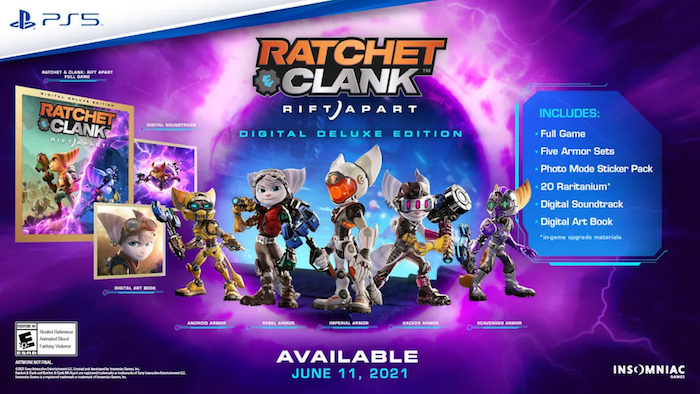 Those who choose to forego a disc can pick up the digital deluxe edition. It comes with the game itself, along with the following digital extras: 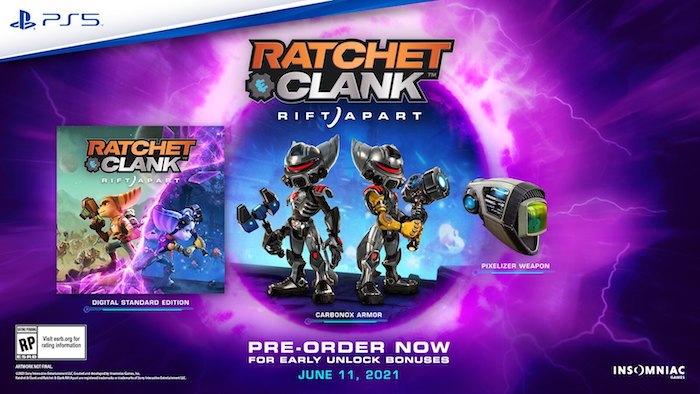 Preorder the digital standard edition or the physical launch edition, and you’ll receive early unlocks for the Carbonox Armor from 2003’s Ratchet & Clank: Going Commando and the Pixelizer weapon, which appeared in the 2016 Ratchet & Clank. US and Canadian customers who preorder will also get a $5 discount off official merchandise on the PlayStation Gear store.

What is Ratchet & Clank: Rift Apart?

Ratchet & Clank: Rift Apart is the latest in a long line of PlayStation-exclusive third-person shooters that goes back to PS2. This time around, Dr. Nefarious whips up a device that lets him access other dimensions. He uses it to separate the lovable Lombax Ratchet from his robotic friend Clank. Your job is to reunite the friends, while hopping between alternate realities and using a wide array of powerful (and often comedic) weapons. There’s also a new female Lombax in the equation, but we haven’t gotten many details about her yet.

Chris Reed is a commerce editor and deals expert at IGN. You can follow him on Twitter @_chrislreed.

Best Buy Will Have Nintendo Switch OLEDs in Stock Tomorrow

Sora’s In Smash and Metroid Dread Is Amazing – NVC 581

Destiny 2 Will Lose The Forsaken Expansion to the Vault