Ever since Ratchet & Clank: Rift Apart was announced, players have wondered who the mysterious female Lombax is that Clank meets in an alternate dimension. Insomniac Games has finally named her today. Rivet is even the star of a new trailer featuring a classic DEVO song, also revealing that DEVO founder Mark Mothersbaugh will be composing the soundtrack for the entire game.

In the alternate dimension, Rivet is a resistance fighter who opposes Emperor Nefarious and has made herself one of his targets by doing so. After Ratchet and Clank are separated (or “rift apart,” as it were), Clank teams up with Rivet to take down Nefarious in a world where he seems to have the upper hand. The trailer showcases some of the game’s new weapons and locations, like Nefarious City. As players switch between the dimensions with no loading times, they’ll also see familiar locations like Sargasso and Torren IV that now have different features when experienced in Rivet’s dimension. The trailer also shows off some of Rivet’s moves and she seems especially handy with that hammer of hers.

The trailer also showcased one of the tracks that will make up the game’s soundtrack. Mark Mothersbaugh previously composed the soundtracks for the Crash Bandicoot and Jak & Daxter trilogies, as well as the MySims franchise. He also has extensive credits within the film and television industries, having composed the soundtracks for shows like Rugrats and dozens of films. To most people, he will be familiar as one of the founding members of DEVO. After an 11 year hiatus from the video game industry, Mothersbaugh returns to compose Rift Apart’s entire soundtrack.

Insomniac has alsoo revealed the five costumes players will get when they pick up the Digital Deluxe edition. This version of the game will include the Imperial, Scavenger, Android, Rebel, and Hacker suits, as well as 20 Raritanium for weapon upgrades, a sticker pack to use in the franchise’s first ever photo mode, a digital artbook and a copy of that digital soundtrack. 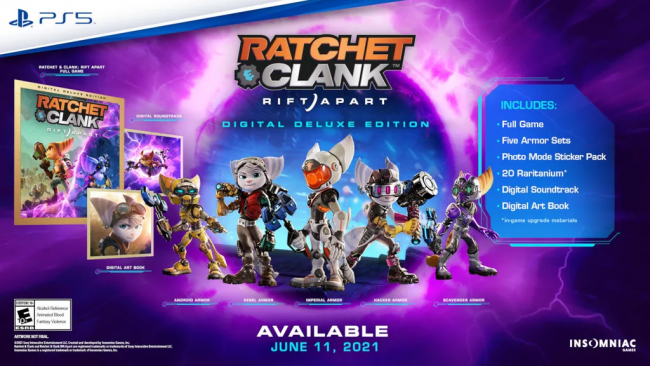 Those who pre-order any version of the game will get the Carbonox armor from Ratchet & Clank: Going Commando as well as the Pixelizer weapon right at the start of the game. If you choose not to pre-order, you will still be able to unlock these items in-game eventually when it’s released exclusively on PS5 on June 11. In the meantime, be sure to tune in to the next State of Play at 2PM on Thursday, April 29 to catch an extended 15 minute glimpse at gameplay from the upcoming title.

PlayStation State of Play Coming Thursday, Will Focus on Ratchet & Clank: Rift Apart Along With a Couple of Other Games

E3 2021 Exhibitor List Now Includes Activision, Bandai Namco, SEGA and Many Others, But Not Sony