Resident Evil’s Jill Valentine and Chris Redfield are the newest horror-themed skins added to Fortnite, following the likes of Rick Grimes from The Walking Dead. Both are of these famed survival-horror stars are now available for purchase in Fortnite’s in-game shop. They were introduced through a fun little teaser video that you can see below:

You can purchase Jill and Chris individually for 1,500 V-Bucks each, or get them together in the S.T.A.R.S. team bundle for 2,100. No matter which path you take, each character has an alternate skin. Chris’ second look is his Hound Wolf Squad style, and Jill’s is the Raccoon City style. 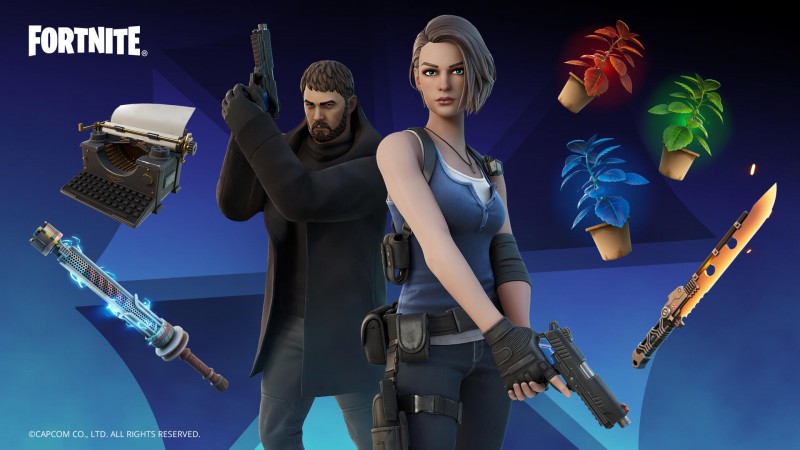 The S.T.A.R.S. bundle includes a few extra items. You’ll get an herb to wear on your back (that can be green, red, or blue), and also a typewriter that can be used for the same purpose. This bundle is rounded out with a stylish Resident Evil x Fortnite loading screen.

If you want more Resident Evil stuff, a S.T.A.R.S. Team Gear bundle gives you two pickaxes: a stun rod and the Hot Dogger, which just happens to be an Umbrella-developed energy knife. The prize of this bundle is an umbrella emote fittingly outfitted with the Umbrella logo.

At the rate Epic Games is adding licensed content to Fortnite (including the addition of characters from the new theatrical release Dune), matches are starting to look like a showcase of pop-culture all-stars. It’s the video game equivalent of what Funko is doing with its Pops line.

What do you think of Fortnite’s most recent season? Are you okay with the high number of licensed characters? Let us know your thoughts in the comments section below!