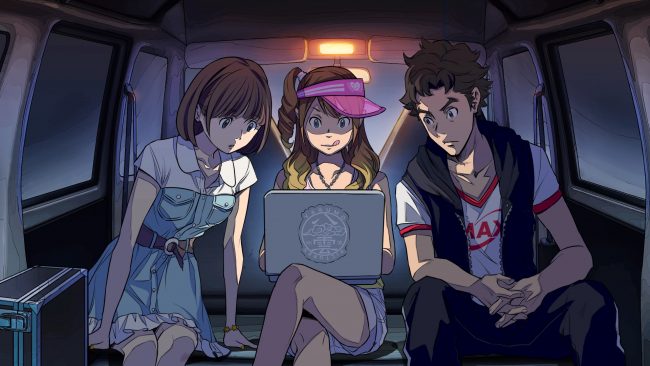 Root Film is a visual novel set in the Shimane prefecture in Japan, much like its predecessor Root Letter. This time around Kadokawa Games will have you investigating multiple mysteries in a much more intense adventure than the original. While it can initially seem like the mysteries you come across aren’t connected it won’t be long until you realise that you are on a much darker adventure then it first appeared.

The games main protagonist is Rintaro Yagumo, an up-and-coming director of a small independent film company. He’s been hired to work on a new collaboration called the Shimane Mystery Drama Project where three different directors will be creating their own films set within this region of Japan.

Things start to take a turn for the strange when Rintaro finds out that this is actually a reboot of a project that was cancelled ten years ago. No one can tell him why the project was cancelled and the original films seem to have been misplaced. All he can seem to find out is that something devastating happened and all those involved in the project have since resigned from the TV company.

While Rintaro and his team are scouting for locations for the film project they also try to investigate what happened ten years ago. Trouble seems to follow the team wherever they go and you’ll end up seeing some pretty dark subject matter including domestic violence and plenty of murders.

You won’t just be taking charge of Rintaro, there are some chapters which centre around Riho, a new actress, and her manager, Shoko Manabe. While it doesn’t seem like it at first, the cases that you investigate with Riho are connected to Rintaro. For spoiler reasons we won’t discuss how they are connected but will say that the game does a brilliant job at linking up the two separate stories in a way that is likely to surprise you.

Both Rintaro and Riho are interesting characters and there is also a compelling supporting cast. Rintaro has a great team surrounding him, including his assistant Aine Magari. Her sassy attitude is great at lifting the mood particularly when Rintaro is in a more sombre and serious mood. It’s great to see their chemistry especially during the times that the team gets to just hang out and relax.

In terms of gameplay this is a visual novel with a bit of a difference. Sure, there will be lots and lots of text that you have to read through but you also get to choose which locations you want to visit. It’s a simple difference to most other games of this genre but it does help to give the illusion of having more agency. The only negative about this is that there are times when it’s not clear where you need to go next to advance the story. Thankfully it will never take long to whizz around all the locations you have access to in order to continue.

Root Film PS4 Review – Take it to the Max

Occasionally you’ll need to interrogate people using Max Mode. This mode lets you argue against someone and bring up the key words that you’ve learnt during the investigation. It’ll be a battle of wits against your opponent as you use your evidence to try to prove what you think has happened. Using this mode will be invaluable in getting you more information and even in uncovering murderers.

It definitely feels like the game is paying homage to games like Phoenix Wright as winning against an opponent will lead them to make exaggerated faces just like you’d get at the end of a trial. Max Mode is nowhere near as in-depth as the Phoenix Wright trials but they are fun little diversions where you’ll get to see how well you’ve been paying attention to the case so far.

The story as a whole is definitely compelling and while some of the earlier cases are a little predictable there are some good twists later on that will keep you gripped. It’s a shame that you’ll run into the occasional typo in the text but thankfully, if you can ignore this, you’ll find that much of the dialogue is both entertaining and charming in all the right places.

The art style is also something that you really need to take a moment to appreciate. Each character has a vibrant and colourful design and the backgrounds are gorgeously detailed and definitely make this writer want to take a trip to Shimane. The soundtrack also does a great job at setting the mood as well as creating tension and excitement when needed.

Root Film does a great job at holding your attention throughout the 15-20 hours you’ll spend with it. The truth behind the film project from ten years ago is an intriguing one to uncover and you’ll discover plenty of dark secrets along the way. Despite being a game with lots of death in it, it also manages to be a love letter to the Shimane region in Japan. The endearing characters you meet will also help keep the game feeling light despite some of its intense subject matter.