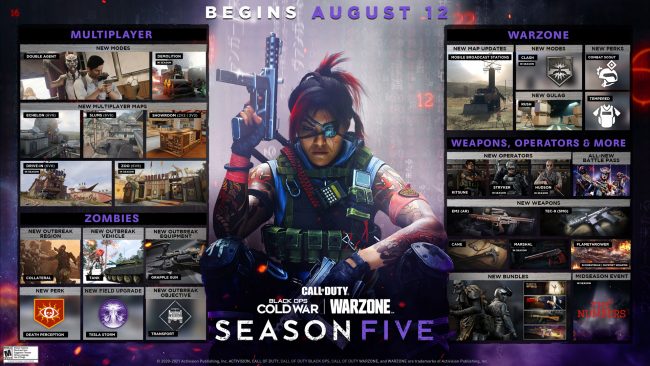 Editor’s Note: To support the developers and employees at Activision Blizzard pushing for change, we are covering the games that they are working hard on making. However, we need to acknowledge that the push for change amid the lawsuit alleging a discriminatory “frat boy” culture is still ongoing. As those employees seek a shift in the company’s culture, they are still passionately developing games, and we’re highlighting the work they are doing. We will also continue to report on the issues at Activision Blizzard as the employees seek to reform the culture and make it a safer, equal, and more inclusive workplace.

Call of Duty: Black Ops Cold war is getting a new Among Us-like game mode in Season 5: Double Agent. That’s the headliner feature of the upcoming Season 5 for both Black Ops Cold War and Warzone, but it certainly isn’t the only thing coming to the set of games. The full roadmap outlines five new maps for Black Ops Cold War, some exciting teases for Warzone, and new Operators and weapons being added across both titles.

A new party game mode where up to ten players are sent to execute a mission, but a few double agents may impede progress. Similar to other recent social mystery games like Among Us, players are assigned one of three roles—Double Agent, Investigator, or Operative—where each must work to fulfill their own objectives. The Double Agents are looking to kill everyone else or set off explosives on the map. Meanwhile, Investigators and Operatives are attempting to identify who is working against them.

Each role gains access to an assortment of unique abilities and weapons that help them fulfill their own mission. Treyarch recommends people hop on mic for this one, as it’s best played with everyone communicating and either trying to deceive others or figure out who the Double Agents are.

Coming mid-season, Demolition is the return of a classic. Attackers try to take out two bomb sites, while Defenders try to hold them off.

Low cost scorestreak weapon to round out the selection.

See enemies through walls, with additional abilities along its upgrade path.

Shoot lighting out of your body and sun and damage enemies.

Burn zombies to a crisp with this support carried over from the multiplayer’s new scorestreak option.

A new Region (Collateral) and Objective (Transport) are coming to Outbreak, along with a tank and a grapple gun.

Onslaught is getting new maps from the multiplayer, specifically Echelon.

This is the first time that Warzone has received exclusive perks (past perks were tied to Modern Warfare). Combat Scout pings and highlights enemies that the player damages, excellent for effective team play. Tempered makes players Armor Plates are no more heavy duty, bumping armor values up to 75 from 50, but reducing the total a player can wear to two (for an equal total armor value).

Mobile Broadcast Stations are boosting the numbers signal and activating sleeper agents. And [REDACTED] is thus far redacted for a reason, but it could have something to do with a mystery mid-season event coming up “soon.”

The new Gulag is a miniaturized version of the Rush map.

Coming mid-season as a successor to Rumble, this is a 50v50 unlimited respawn deathmatch to a score of 200, however it divvies teams up into smaller squads at select locations around the map. Everything functions much as it would it in normal Warzone battle royale modes, which means you can test out weapons and loadouts in a respawn environment without worrying about being eliminated.

‘The red doors grow unstable.” The red doors scattered around the map have something to do with an upcoming mid-season event, and using them might offer some teasers about what’s coming as players are sent to other places. They tease that it might also involve the mobile broadcast stations.

Ghost of Tsushima: Legends to Get Standalone Release Next Month, Big Update Adds Rivals Mode for All Players